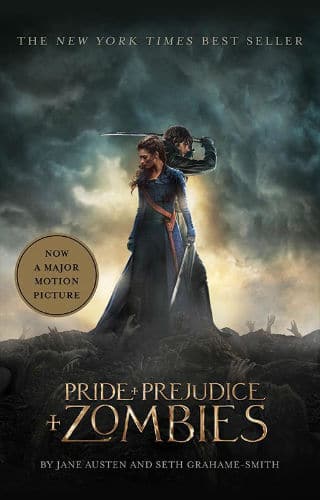 A kind of “literary mash-up” and retelling, Pride and Prejudice and Zombies (of a sort) is sassy, creative fiction. Ironically, I found it as relevant to today’s society (is there anything that cannot be cured by a dose of infected zombies? *sarcasm*), as it might appeal to those who admire the old literary language that Austen wrote with such class and grace.

The story is, at its heart, the same as Jane Austen’s classic Pride and Prejudice. We meet the feisty Lizzy Bennet only instead of being snubbed for lacking graces, she’s skilled in the arts of weaponry. Mr. Darcy is still as proud as ever with an arrogance Lizzy cannot tolerate. Only in this scenario, they are equally matched in their skill with the sword as trained zombie slayers. With every meeting, the tension crackles as Lizzy’s disgust of the arrogant man rises and his attraction to Lizzy grows.

I’ve publicized this before, but I’ll say it again for clarification purposes before getting into this review. I’m a fan who doesn’t mind classics creatively reworked. However, I was aghast when first I saw this travesty on the shelf of a B&N bookstore. The difference between then and now? A film was adapted, which rose to modest box office success. The trailer was the 180 factor that changed my opinion so thoroughly. In that brief visual characterization, I was swayed to believe this would indeed be a story I could love. With the arrival of the film on DVD, reading the novel before seeing the film seemed a good idea. When all is said and done, the decision to do so was a good one.

The book is absolutely hilarious. While reading, images of the cast Lily James, Sam Riley and Matt Smith in the roles of Elizabeth Bennet, Mr. Darcy, and Parson Collins kept presenting themselves. To balance the good with the bad, I do think that though the beginning was sharp, the middle portions lagged. Though to its credit, I think the ending picks things up again. Saying the following might be strange considering the genre and style of the book, however, the zombie attacks came with too great a frequency. I understand that is the appeal and parody interest in the book, but limiting the frequency with which the zombies attacked may have rendered a better story.

Apart from this, Pride and Prejudice and Zombies is great fun. There’s no argument to be made otherwise. The characters are essentially the same only they’re feistier. Come to think of it, anytime we are able to experience an even more opinionated Elizabeth Bennet, is a good time. Many of Austen’s original dialogue passages are intact although Seth’s additions work into the language with unusual ease as befits the tone of the book.

If you don’t mind a reimagined (to the extreme) version, this zombified piece of literature is fabulous. Even more so if you’re interested in seeing the adaptation. It keeps things marching in the same timeline and still throws everything into delicious chaos. The temptation of see Elizabeth and the Bennet sisters wield swords rather than needlework is temptation enough, surely, even if nothing else is. 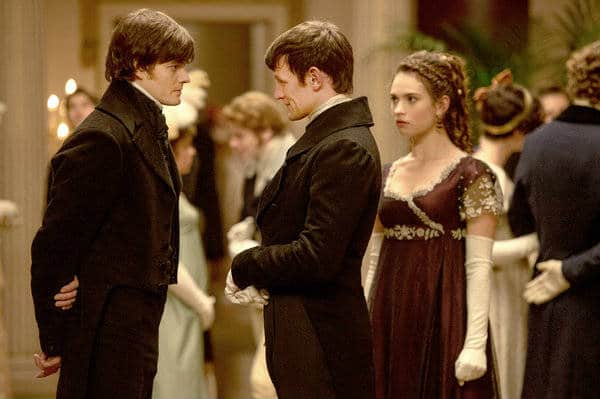 Of course, Pride and Prejudice and Zombies has already been adapted earlier this year starring Lily James and Sam Riley. But if you like Austen mashups like Lost In Austen or Austenland, you might also enjoy this one although those aforementioned noticeably lack the addition of zombies. For those who like contemporary films, Warm Bodies is also an adorable rom-com involving zombies.

Check out our other Literature Reviews. Or search our ‘Jane Austen‘ tag for more Austen-related articles, reviews and more!

Our romance-themed entertainment site is on a mission to help you find the best period dramas, romance movies, TV shows, and books. Other topics include Jane Austen, Classic Hollywood, TV Couples, Fairy Tales, Romantic Living, Romanticism, and more. We’re damsels not in distress fighting for the all-new optimistic Romantic Revolution. Join us and subscribe. For more information, see our About, Old-Fashioned Romance 101, Modern Romanticism 101, and Romantic Living 101.
Pin this article to read later! And make sure to follow us on Pinterest.
By Rissi JC on June 16th, 2016