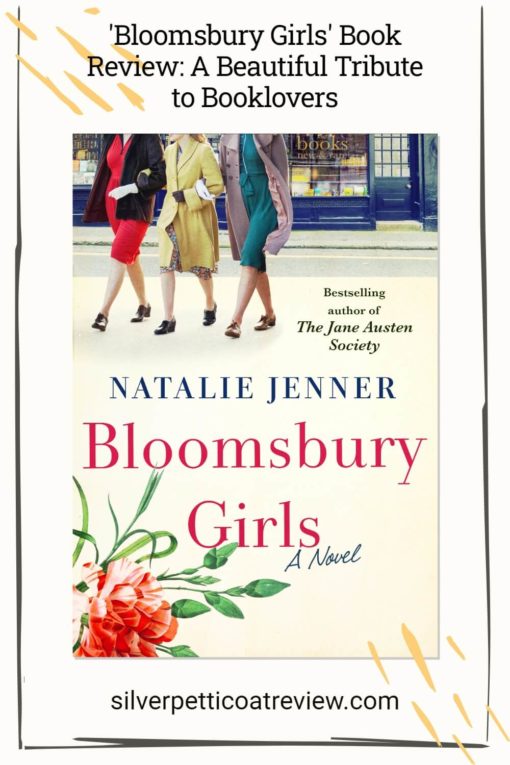 Natalie Jenner, the internationally bestselling author of The Jane Austen Society, returns with a compelling and heartwarming story of post-war London, a century-old bookstore, and three women determined to find their way in a fast-changing world in Bloomsbury Girls.

Bloomsbury Books is an old-fashioned new and rare bookstore that has persisted and resisted change for a hundred years, run by men and guided by the general manager’s unbreakable fifty-one rules. But in 1950, the world is changing, especially the world of books and publishing, and at Bloomsbury Books, the girls in the shop have plans:

Vivien Lowry: Single since her aristocratic fiancé was killed in action during World War II, the brilliant and stylish Vivien has a long list of grievances–most of them well justified and the biggest of which is Alec McDonough, the Head of Fiction.

Evie Stone: In the first class of female students from Cambridge permitted to earn a degree, Evie was denied an academic position in favor of her less accomplished male rival. Now she’s working at Bloomsbury Books while she plans to remake her own future.

As they interact with various literary figures of the time–Daphne Du Maurier, Ellen Doubleday, Sonia Blair (widow of George Orwell), Samuel Beckett, Peggy Guggenheim, and others–these three women with their complex web of relationships, goals and dreams are all working to plot out a future that is richer and more rewarding than anything society will allow.

Natalie Jenner has quickly become one of my favorite contemporary authors. First with the beautifully written The Jane Austen Society and now with Bloomsbury Girls.

I devoured each page with joy – feeling a kindred spirit connection to the three female characters: Evie Stone, Grace Perkins, and Vivien Lowry. Especially Evie with her love and research of forgotten classic books written by women (also a passion of mine).

RELATED: Jane and the Year Without a Summer: This New Book is a Lovely, Romantic Read

Jenner has penned a beautiful tribute to women writers, bookshops, and booklovers with a nostalgic and captivating style in a novel that will become a fan favorite.

Bloomsbury Girls is rich with female friendships, appealing romances, and fabulous female characters with the determination to succeed in a man’s world. It is a can’t miss for historical fiction and women’s fiction lovers everywhere.

Plus, isn’t the book cover gorgeous?

Bloomsbury Girls follows three women still dealing with the aftermath of World War II in 1950s London in an old-fashioned bookstore where they cross paths with famous female literary figures of the time like Ellen Doubleday and Daphne Du Maurier.

The women feel stuck in their lives but dream of creating better lives for themselves – despite their obstacles in a male-dominated world.

When Cambridge denies Evie Stone an academic position because she’s a woman, she begins working instead as a staff member at Bloomsbury Books (with Grace and Vivien), an independent bookstore in London managed by men and led by the general manager’s unbreakable fifty-one rules.

But she has a secret plan that may change her life and her female coworkers’ lives forever.

IS BLOOMSBURY GIRLS A SEQUEL TO THE JANE AUSTEN SOCIETY?

Bloomsbury Girls is a sequel to The Jane Austen Society, but not in the traditional sense. It’s more of a spinoff about Evie Stone’s character set a few years later.

Overall, if you love historical fiction books or are even a book lover and a fan of literary history, this is a must-read novel. The inclusion of real-life historical figures and authors makes it an intriguing read. And the feminist, girl-power slant to the story made it all the more enjoyable.

And while the book is not a romance, it is quite romantic with numerous love stories to enjoy with a slow build. So, if you like a touch of romance in your historical fiction books, you’ll be pleased with this story!

Her incredible ability to effortlessly transition between various accents and voices makes her the perfect choice for this story.

Stevenson’s acting provides an extra layer of authenticity and richness to the novel. She brings the story to life, giving the audiobook a period drama-like feel.

If you love Stevenson’s effortless narration, you should also check out the whimsical mystery series Queens of Mystery (it’s like Pushing Daisies). She earned an Emmy nomination for “Outstanding Narrator” for that series.

That same skill that got her the Emmy nomination is found in the audiobook (from Macmillan Audio).

Ultimately, Bloomsbury Girls (whether you’re reading the book or listening to it as an audiobook) is a delightful mix of female friendship, romance, and the determination to succeed despite the obstacles in your path.

It captured my heart. And I can’t wait for its release to see others fall in love with this book.

Bloomsbury Girls would make a fabulous period drama series like The Paradise or Mr. Selfridge in a 1950s bookstore. It would also work as a standalone film or limited series. The story lends itself naturally to different mediums.

Content Note: There is nothing graphic in this book. A couple of implied love scenes behind closed doors are in the book.

“An illuminating yarn… Fans of emotional historical fiction will be charmed.” —Publishers Weekly

“Bloomsbury Girls is an immersive tale of three women determined to forge their own paths in 1950s London. Jenner has proven to be a master at spinning charming, earnest characters and paints a vivid picture of postwar England. I wanted to stay lost in her world forever!” —Stephanie Wrobel, internationally bestselling author of Darling Rose Gold

“Bloomsbury Girls is a book lover’s dream, one of those rare reads that elicits a sense of book-ish wistfulness and nostalgia. Jenner has created a colorful cast of characters in a story about friendship, perseverance, and the ways that determined women can band together in a man’s world. You’re in for a treat.” —Sarah Penner, New York Times bestselling author of The Lost Apothecary

“In a London still reeling from the ravages of World War II and the changes war has brought to English society, three young women take their futures into their own hands. With Bloomsbury Girls, Natalie Jenner has penned a timely and beautiful ode to ambition, friendship, bookshops, and the written word.” —Janet Skeslien Charles, New York Times bestselling author of The Paris Library

“In post-war London, Bloomsbury Books survived The Blitz until Vivien Lowry, Grace Perkins, and Evie Stone set off their own bomb on the stuffy all-male management. What ensues is the most delightful, witty, and endearing story you will read this year. Natalie Jenner, bestselling author of The Jane Austen Society, proves that she was not a one hit wonder. Like Austen, her second book is even better than the first.” —Laurel Ann Nattress, editor of Jane Austen Made Me Do It

A MESSAGE FROM AUTHOR NATALIE JENNER

Dear readers, I am immensely grateful for the outpouring of affection that so many of you have expressed for my debut novel The Jane Austen Society and its eight main characters.

When I wrote its epilogue (in one go and without ever changing a word), I wanted to give each of Adam, Mimi, Dr. Gray, Adeline, Yardley, Frances, Evie and Andrew the happy Austenesque ending they each deserved.

But I could not let go of servant girl Evie Stone, the youngest and only character inspired by real life (my mother, who had to leave school at age fourteen, and my daughter, who does eighteenth-century research for a university professor and his team).

Bloomsbury Girls continues Evie’s adventures into a 1950s London bookshop where there is a battle of the sexes raging between the male managers and the female staff, who decide to pull together their smarts, connections, and limited resources to take over the shop and make it their own.

There are dozens of new characters in Bloomsbury Girls from several different countries, and audiobook narration was going to require a female voice of the highest training and caliber. When I learned that British stage and screen actress Juliet Stevenson, CBE, had agreed to narrate, I knew that my story could not be in better hands, and I so hope you enjoy reading or listening to it.

Born in England and raised in Canada, Natalie has been a corporate lawyer, career coach and, most recently, an independent bookstore owner in Oakville, Ontario, where she lives with her family and two rescue dogs. Visit her website to learn more.