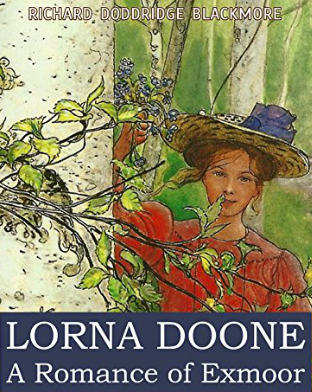 Written by Richard Doddridge Blackmore, Lorna Doone was published in 1869. Other authors of the 19th Century, including Thomas Hardy, loved the story and its characters. The general public loved it too. According to my copy, it has never been out of print, and I can see why.

Told to us by the main male character, John Ridd, as he remembers it all,  Lorna Doone takes us through John’s life. He is a farmer, or a yeoman, so he first tells us about his education and his family. However, John’s town of Oare has a problem. Specifically, there is a family of bandits called the Doones. The Doones live in the protected Doone Valley and rob the passing road. John’s father, John Reid, is one of their victims, leaving behind his wife and three children.

Our narrator finds himself looking after his mother, two sisters, and the farm. One day, when trying to catch fish for his mother, fourteen-year-old John finds himself in Doone Valley where he meets Lorna Doone. And in that moment, the two form an attachment to each other that only grows as they get older. Of course, it turns out that Lorna is the granddaughter of Ensor Doone, the leader of the outlaws, and they call her Little Queen.

In the first half of the novel, John struggles with his growing attachment to a relative of the men who murdered his father, while caring for his farm and supervising his sisters Annie and Eliza. When their cousin (and famed highwayman), Tom Faggus, arrives and shows an interest in Annie, John and Annie have a heart-to-heart and realize that their mother is not going to be pleased with either of their choices in spouses. Eventually, their mother approves of both Lorna and Tom.

As the story goes on, however, John and Lorna have new problems. Lorna is being courted by two Doones, and one of them is the dangerous and bloodthirsty Carver Doone who is not above murdering people to get his way. When her grandfather dies, John saves her from the Valley. The Doones don’t like to lose, however, and want her back.

As John (and us) learn about Lorna’s past, we also learn about Annie and Tom, the political background of the story, and the town of Oare’s growing anger at the Doones. Can a simple farmer and a Doone be happy? Is Lorna even a Doone? Will Oare burn Doone Valley to the ground? Who killed John’s father? Will John and Lorna (and Annie and Tom) live happily ever after?

I have to confess, I had never read this before. I have also never seen the film or miniseries adaptations, which I am a little ashamed of. I’ve heard that all the films are very good, but please don’t quote me on that. If you have a favorite, please let me know in the comments!

The characters in Lorna Doone are great fun, and the romance between Lorna and John seems realistic. They meet when they’re kids and although they later say they both knew that they liked each other, they fell in love as they spent time together.  The couple faces several issues to their happiness- Lorna’s adopted and real families, the many women in love with John, English politics, John’s “reformed” highwayman brother-in-law, and the planned invasion of Doone Valley, to name a few. But this just makes the ending even sweeter as we watch it unfold.

Annie and Tom’s story is less important than John and Lorna’s. It seems like they are there to give John and Annie some common ground (i.e. they both fell in love with people they maybe shouldn’t have). It gives us a chance to see big brother John and adds additional conflict to the story. Because that’s what was missing from Lorna Doone. Conflict. Despite that, it works and I loved them. The biggest issue is that some of the characters speak in a dialect that can be a little challenging to read. Overall, Lorna Doone is a beautiful story that is worth the effort.

The language is beautiful and the story flows well. Lorna Doone is very descriptive; you can see the story unfold in front of you. It reminds me of Thomas Hardy’s writing, and, since he loved the book, this doesn’t surprise me. It’s written like all the great classics of the 19th Century, but for some reason, we don’t seem to talk about it as much. I think this is a mistake. There is a ton to love in this underappreciated classic. At its heart, Lorna Doone is a romance, a story of a love that overcomes all odds. If you like any of the film adaptations, 19th Century British Literature, or love stories, you might like Lorna Doone.

Have you read Lorna Doone: A Romance of Exmoor? What are your thoughts on this classic? Should I watch an adaptation, and if so, which is your favorite? Let me know in the comments!

Our romance-themed entertainment site is on a mission to help you find the best period dramas, romance movies, TV shows, and books. Other topics include Jane Austen, Classic Hollywood, TV Couples, Fairy Tales, Romantic Living, Romanticism, and more. We’re damsels not in distress fighting for the all-new optimistic Romantic Revolution. Join us and subscribe. For more information, see our About, Old-Fashioned Romance 101, Modern Romanticism 101, and Romantic Living 101.
Pin this article to read later! And make sure to follow us on Pinterest.
By Bailey Cavender on January 31st, 2017