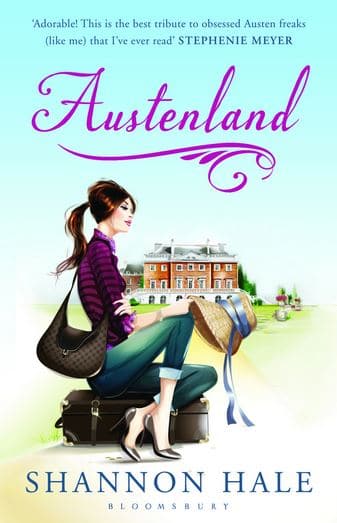 It is a truth universally acknowledged that Jane Austen is a cultural phenomenon. Because of this, modern adaptations of her classic literature make up a genre of their own. Austenland by Shannon Hale was published in 2007 and doesn’t only join this genre, it carves out its own niche and speaks to Jane Austen fans in a different way. I also want to mention here that I’m going to try to stay as spoiler-free as possible throughout this review.

Austenland is the story of a modern, independent woman named Jane Hayes who has a deep, dark secret; she is obsessed with Mr. Darcy and this embarrasses her to no end. She reads the novels of Austen regularly but hides the A&E Pride and Prejudice (starring Colin Firth) in her houseplants. Hey, we’ve all been there.

The story starts out a year before the main events of the novel, building up to Jane’s time in Pembrook Park. The chapters are broken down by the days leading up to Jane’s trip to the Park or, as she calls it, Austenland, and the days of her stay. The novel is further broken up by descriptions of the 15 boyfriends she’s had through her life.

These descriptions, broken down into little vignettes, provide a glimpse into the life of Jane and help explain why she is so obsessed with Darcy. As Jane’s background unfolds, the disappointing relationships that she has had have left her disillusioned with modern men, making Mr. Darcy seem much more attractive despite being fictional.

Jane’s adventure really begins when her aging great-aunt comes to visit her and discovers her hidden DVDs. While Jane claims to be a happy single woman in her 30s, she has, as mentioned, been through a series of poor relationships. Her aunt figures out that she’s secretly obsessed with Mr. Darcy and that that is negatively impacting her attempts at dating – no one can live up to Darcy as played by Colin Firth! – and sends her to Pembrook Park to help her put her Darcy obsession to rest.

Pembrook Park is a Regency themed park in England where women pretend to be in 1816 and can act out their favorite Austen novels. During the novel, the park has a Persuasion-based subplot, a Pride and Prejudice subplot and some shades of Mansfield Park.

In the House, Jane meets Ms. Charming and Ms. Heartwright, both wealthy women who are starved for affection and, therefore, visiting the park for the men. The men, Mr. Nobley, Captain East and Colonial Andrews, are all professional actors playing a part: Mr. Darcy, Captain Wentworth and (maybe) Colonial Brandon, respectively. This gives each woman a chance for her own Austen-style romance with the romantic hero of her choice.

Jane finds that pretending to be in Austen’s world is harder than she thought, as the line between fantasy and reality has become blurred. Finding herself struggling with being a part of the fictional world she thought she wanted, she embarks on a fling with the more real-seeming Martin the Gardener. At Pembrook Park, however, no one is who they seem to be.

Jane and Nobley butt heads from the get-go, fulfilling the Darcy/Elizabeth subplot. Jane and Nobley grow closer together, providing Jane with her major crisis and conflict: who is real and who is acting? Obviously, Nobley is an actor, but Jane cannot help but feel that there is some chemistry between them. Her fling with Martin seems real, but is it?

The romance in the novel is delightful. Since the entire plot of the story is about Jane trying to put her Mr. Darcy obsession behind her in three weeks, the main romance has the potential to feel rushed while the other can seem out of place. However, Hale manages to avoid this. The main romance has a nice build and the other has a satisfying conclusion.

Austenland is refreshing in that the romance is both not what you expect and what you expect at the same time. There are so many obstacles and unanswered questions before the ending, but that made the payoff that much better. Overall, it’s a sweet story about a woman who tries to kick the “Darcy Habit” and discovers that she doesn’t need to be ashamed of it, as long as she can keep a grip on reality.

If you like the movie, the web series The Lizzie Bennet Diaries or Bridget Jones’s Diary (film or book), you’ll probably enjoy Austenland. Other Austen-like books include Pride, Prejudice and Jasmin Field by Melissa Nathan, The Jane Austen Book Club by Karen Joy Fowler, the “what happens after the end” novels, the alternative viewpoint books and the ever popular Pride and Prejudice and Zombies (and the lesser-known Sense and Sensibility and Sea Monsters).

When it comes to revamping the classic works of Ms. Austen, Austenland stays true to Austen’s  spirit while still being fresh and fun. It’s a tribute both to the genre and to the legions of women who simply adore Austen and her characters.

Austenland was adapted into a movie that was released on September 27th, 2013. I love the movie, although in some ways it’s very different from the book. This is most noticeable in the character of Mr. Nobley and some of the motivations of the other characters. Despite those changes, the movie remains faithful to the spirit of the novel. Since author Shannon Hale was a screenwriter, I find it hard to seriously criticize any changes. To me, if a writer has given her stamp of approval to an adaptation of her novel and worked on it as well, there’s really nothing more to be said. I think the film is great, check it out!

Our romance-themed entertainment site is on a mission to help you find the best period dramas, romance movies, TV shows, and books. Other topics include Jane Austen, Classic Hollywood, TV Couples, Fairy Tales, Romantic Living, Romanticism, and more. We’re damsels not in distress fighting for the all-new optimistic Romantic Revolution. Join us and subscribe. For more information, see our About, Old-Fashioned Romance 101, Modern Romanticism 101, and Romantic Living 101.
Pin this article to read later! And make sure to follow us on Pinterest.
By Bailey Cavender on September 14th, 2015