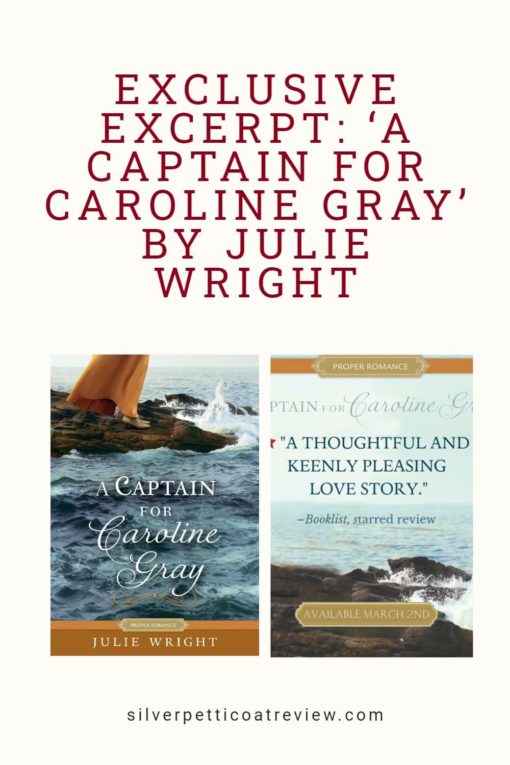 Author Julie Wright shares a captivating passage with us from her new Regency Romance, A Captain for Caroline Gray.

If you’re a fan of Regency romances on the high seas and love clean romance books, A Captain for Caroline Gray by Julie Wright is the book for you! The just-released historical fiction novel has already gotten some fantastic reviews, including a starred review from Booklist, and for a good reason. So, find out more about this charming new novel and read the exclusive excerpt below.

OFFICIAL BOOK DESCRIPTION OF A CAPTAIN FOR CAROLINE GRAY

Caroline Gray’s third season in London society ends as badly as her first two—no marriage proposal, no suitor, not even a glimmer of an interested prospect. She suspects it’s because she is far too quick to speak her mind to men who are put off by her forthright opinions, her eager intellect backed by a formal education, and her unconventional ideas about the future. She is far more daring than demure to suit the taste of her class. Besides, Caroline thinks there will always be next season to find a husband.

However, her family’s dwindling income leaves Caroline with only one choice to secure her future: a one-way ticket to sail with the Fishing Fleet to India, where the son of a family friend waits. If the match doesn’t work, Caroline cannot return home.

Captain Thomas Scott loves the thrill of the open sea, and as commander of one of the ships of the Fishing Fleet, he ferries scores of young English girls to the shores of India to find husbands. The voyages pay well, but he struggles to understand why families would allow young women to be matched with total strangers so far away.

The trips have always been routine and uneventful—until this trip’s first night’s dinner with one Miss Caroline Gray. She engages in a lively political conversation, presenting opposing viewpoints to the conventionally opinionated gentlemen at her table. Captain Scott is secretly amused and delighted at her boldness, not to mention quite drawn to her beauty.

The rest of the passengers are shocked by her behavior and Caroline finds herself an outcast, suffering harsh judgments from the other passengers. However, she finds an unlikely ally in Captain Scott which quickly draws them closer.

Both know an arranged marriage awaits Caroline at the end of their voyage, yet the attraction between them is undeniable. Caroline will have to decide if she will honor her mother’s wishes and marry a man in India whom she has never met, thus securing a future for her and her mother, or be brave enough to throw convention to the wind and commit to love a sea captain. He may be enchanted by her bold and unconventional ways, but will his love and admiration last?

EXCERPT FROM A CAPTAIN FOR CAROLINE GRAY

Caroline whirled to see Captain Scott looking at her. He walked her direction in a leisurely fashion, his jacket flapping in the breeze, his broad shoulders seeming to loom larger in the pale starlight. “The first is when you fear you’ll die. The second is when you’re afraid you’ll live.”

“Then why are you hanging over the edge as though in the fits of illness?”

“I was looking at the water.”

Their gazes connected as he drew near her. He hurried to look down. “You realize there is nothing but black to see out there when there is no moon? Far better to look up where there is at least a view to be had.”

She looked up. “Ursa Major,” she whispered, and felt the ache of her loss wash over her again. She traced the familiar pattern of stars with her eyes and then over to Cassiopeia, remembering her father and her mother pointing up and tracing the lines with their fingers while she and Josephine nestled between them.

Papa was dead. Mama and Josephine were out of her reach.

Would it have been so bad to have stayed and been the family spinster? She would have still had Mama and Josephine if she’d stayed.

But no. Not really.

Caroline had been right to choose this path that offered the hope that she might form new attachments to hold and love, that she might have children for whom she could trace lines in the stars.

“You know all your constellations? Or just Ursa Major?” Captain Scott asked.

Caroline dragged her gaze from the stars back to him, noticing how much more relaxed he was on his deck than he had been at dinner.

“It is impossible for me to know them all, beyond academics, since I live in the northern hemisphere, and there are some that I’ve never seen in the sky.” Even as she spoke, she’d heard how much her words sounded like a lecture. Couldn’t she simply say, “My, but how lovely the stars are tonight!” Was it so difficult to speak in breathy exclamations?

Intent on recovering herself, she asked him a question. If she could keep him talking, then she could direct his attention away from her. “What brings you from your wheelhouse, Captain Scott?”

He murmured something unintelligible before saying, “I am the captain. It is my job to see to the needs of the whole of my ship, not just the wheelhouse. Besides, I find it healthful to stretch my legs every now and again. And I’ve found that viewing the stars academically, as you say, through a sextant and charts, makes it easy to forget the majesty of their movement and light. I like to look up and remember beauty.”

He quickly looked away as though he’d been caught doing something wrong. “Are you apprehensive at all to travel to India?” he asked, bringing the conversation directly back to her.

She sighed inwardly. She knew from experience that men—no, not just men, but people—liked to talk about themselves. So why could she never manage to keep a conversation on the other person? Did she not ask complex enough questions?

“No, sir, I’m not apprehensive. I think a new situation might be vastly interesting, and travel has always suited me. As a young girl, I often accompanied my parents while they traveled to visit friends and family. The journey always seemed so splendid and arrivals always seemed to come too soon. What of you? Has life on the sea been adventurous, or were you ever apprehensive about your choice?”

He looked away again, and she wished she could see his eyes clearly to determine how he felt. “It was not my choice, Miss Gray. Sailing is the family business and has been for several generations. If I’d chosen another occupation, my father would have had me keelhauled until I changed my mind.”

His candor surprised her and emboldened her to continue. “That doesn’t answer my question entirely. Does the adventure suit you, or does it make you apprehensive?”

He studied her in a way that brought a flush to her cheeks that she hoped he could not see in the veil of darkness. It was likely because of the darkness that he studied her so intently; she was likely as much a silhouette to him as he was to her.

“Apprehensive at first. And apprehensive each time I had to take a new route. Now, my schedules are fairly steady, my course varying but little.”

His long pause made her think he’d ended the conversation. She assumed he would take his leave, but then he spoke again.

“Now my apprehension is reserved for the journeys of others, for the choices they think they must make without understanding the realities that await them.”

She frowned, unsure what to make of him or his somber declaration. “Surely you feel no such apprehension for me, Captain Scott.”

His grip tightened on the railing before he released it. He gave a quick bow. “I fear I’ve intruded far too long on your late-night ocean views. Good night, Miss Gray.”

She hurried to return a curtsy. “Good night, Captain Scott.”

Julie Wright wrote her first book when she was fifteen and has written over twenty novels since then. She is a Whitney Awards winner for best romance with her books Cross My Heart and Lies Jane Austen Told Me, and she is a Crown Heart recipient for the novel The Fortune Café.

She has one husband, three kids, one dog, and a varying amount of fish, frogs, and salamanders (depending on attrition). She loves writing, reading, hiking, playing with her kids, and watching her husband make dinner.

PURCHASE LINKS FOR A CAPTAIN FOR CAROLINE GRAY

By The Silver Petticoat Review on March 14th, 2021

1 thought on “Exclusive Excerpt: ‘A Captain For Caroline Gray’ By Julie Wright”