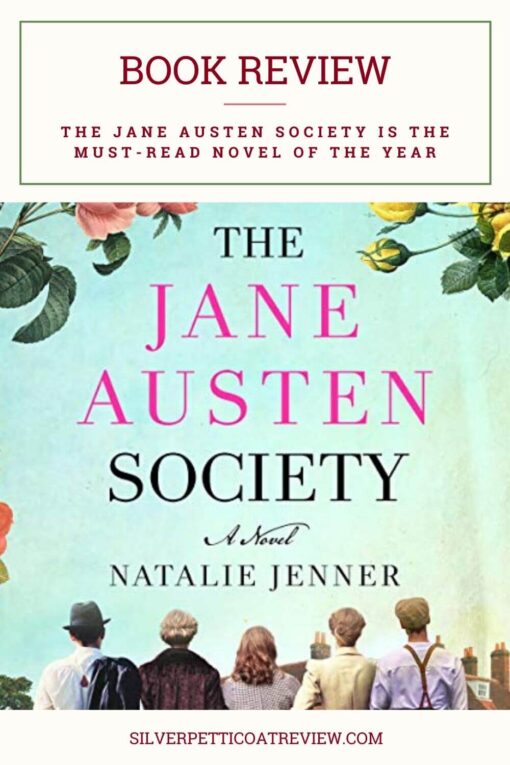 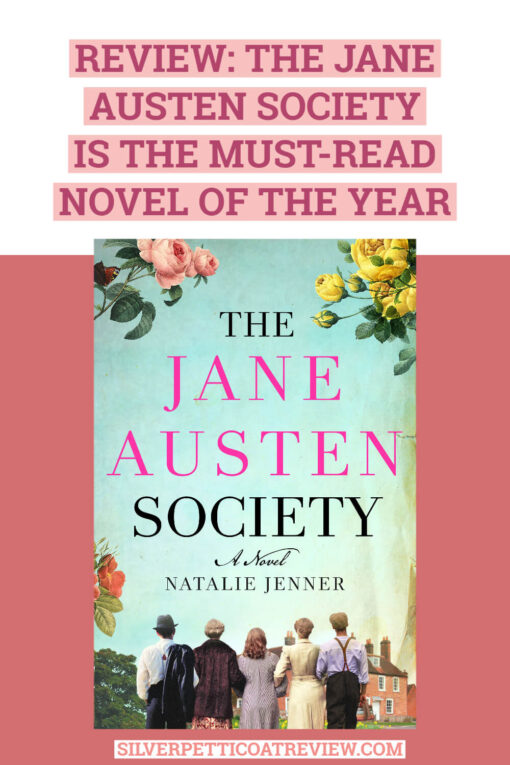 You can also listen to The Jane Austen Society as an audiobook, narrated by none other than the brilliant Richard Armitage!

Disclosure: I received a free copy from the publisher to write an honest review on The Silver Petticoat Review. I was not financially compensated for this post and all opinions are my own.

Just after the Second World War, in the small English village of Chawton, an unusual but like-minded group of people band together to attempt something remarkable.

One hundred and fifty years ago, Chawton was the final home of Jane Austen, one of England’s finest novelists. Now it’s home to a few distant relatives and their diminishing estate. With the last bit of Austen’s legacy threatened, a group of disparate individuals come together to preserve both Jane Austen’s home and her legacy. These people—a laborer, a young widow, the local doctor, and a movie star, among others—could not be more different and yet they are united in their love for the works and words of Austen. As each of them endures their own quiet struggle with loss and trauma, some from the recent war, others from more distant tragedies, they rally together to create the Jane Austen Society.

MY REVIEW OF THE JANE AUSTEN SOCIETY

Jane Austen fans, your next read is here. The Jane Austen Society is a celebration of Jane Austen and the human spirit as well as the power of books. Natalie Jenner’s debut novel is a smart, cozy read – and just the book we all need right now, especially if you’re a fan of Jane Austen or historical fiction books with literary style and Austenesque romances full of cerebral wit and kindred spirit connections.

I expect The Jane Austen Society will quickly become a reader favorite for many years to come. It may also inspire you to reread or read Jane Austen for the first time.

The historical fiction novel takes place in Chawton, England, in post-World War II as a group of eight unlikely individuals come together to preserve the legacy of Jane Austen. Full of charm and warmth, the book captivates from start to finish and will have you rooting for Austenesque happy endings for all.

The first eight members of the society make up a unique group of individuals, and it’s impossible not to root for each one.

Meet Adam Berwick, a farmer who becomes an unlikely devotee and avid reader of Austen. His tragic story (losing two brothers in the war) quickly endears him to you.

Then there’s Mimi Harrison, a famous Hollywood actress from the United States who also happens to be one of Jane Austen’s biggest fans. She’s also engaged to an unscrupulous Hollywood producer with questionable motives. Mimi’s friend, Yardley Sinclair, also becomes a member of the society and works for the auction house where Mimi bids on expensive Jane Austen memorabilia.

Then there’s my personal favorite, Dr. Benjamin Gray, the town’s Doctor, and a widower. His story connects most closely to Adeline Grove, a pregnant war widow with a lively personality. They have a little bit of a will they/won’t they, Emma and Mr, Knightley vibe and it’s fun to read their interactions and spirited discussions.

My next favorite is Frances Knight, the agoraphobic heir to the Knight Estate (aka Chawton House). She has a Persuasion-like romance with the lawyer (solicitor), Andrew Forrester, but they have numerous challenges in their way.

Their love story is subtle but emotional and absolutely compelling. I love reading about more mature characters – especially in an Austen-like setting.

Finally, there is Evie Stone. Many readers will relate to the young woman. She works at the Knight estate and recognizes the significance of the gigantic library and works on cataloging each book. Her intelligence, relatability, and love of books and Austen make her an appealing character.

By the end of the story, I was sad to say goodbye to these delightful characters. I loved the characters, the stories, the homages to Austen, and the hope found on the pages.

If audiobooks are more your reading style, then you’re in for a treat. Richard Armitage brings his acting talent and deep bass voice to the characters of The Jane Austen Society. It’s fun hearing “Mr. Thornton” switch between characters as he changes accents with ease.

Now, I’m typically not a fan of audiobooks because I enjoy making up character voices from my imagination. But Armitage captures the spirit of the novel and the characters and quickly won me over. His gift for storytelling makes him the perfect person to narrate the audiobook, and I was entranced. His reading felt more like a performance or a play.

So, even if you’re not a fan of audiobooks typically, you may want to check this one out. The audiobook is a real treat.

Overall, I was completely captivated. Natalie Jenner’s writing is charming, with a keen eye for romance and small-town life. Not only does The Jane Austen Society affirm the power of Jane Austen’s books, but it’s a huge love letter to Jane Austen and Janeites everywhere.

So, if you’re not a member of the “real” Jane Austen Society, you’ll likely want to join after reading this delightful debut. If you liked The Guernsey Literary and Potato Peel Pie Society, then you’ll enjoy this lovely book. I recommend The Jane Austen Society to everyone.

In all, Natalie Jenner shows she’s a promising author to watch out for, and if there’s one book you read this year – make sure it’s this one.

The Jane Austen Society is prime for a media adaptation. It has all the perfect elements for a movie like Guernsey, a limited series, or even a full-on TV show. The book has the right components to work on different media platforms – though I think a high budget limited series might be the most ideal (since there will be extra time to adapt the complete story). Think Belgravia or A Discovery of Witches.

Still, if an adaptation happens (and it should), can we please have Richard Armitage as Dr. Grey? He fits the role to perfection, although a few of the characters would suit him! Come on, Netflix! Let’s see it happen…

Content Note: There are a few scenes of brief strong language and an explicit scene/attempted assault connected to a Hollywood producer.

Will you be reading The Jane Austen Society? Let me know your thoughts in the comments! And check out the audiobook sneak peek in the video below.

The full unabridged text of THE JANE AUSTEN SOCIETY was read by the distinguished English film, television, theatre and voice actor Richard Armitage for the audiobook recording.

Best known by many period drama fans for his outstanding performance as John Thornton in the BBC television adaptation of North and South (2004), Armitage also portrayed Thorin Oakenshield in Peter Jackson’s film trilogy adaptation of The Hobbit (2012 – 2014).

Spotify users can access a playlist for THE JANE AUSTEN SOCIETY at the following link: open.spotify.com/playlist. The playlist includes music from various film adaptions of Jane Austen’s books, as well as film scores by such incomparable artists as Hans Zimmer, Ennio Morricone, Rachel Portman, and Michael Nyman.

Natalie Jenner is the debut author of THE JANE AUSTEN SOCIETY, a fictional telling of the start of the society in the 1940s in the village of Chawton, where Austen wrote or revised her major works. Born in England and raised in Canada, Natalie graduated from the University of Toronto with degrees in English Literature and Law and has worked for decades in the legal industry. She recently founded the independent bookstore Archetype Books in Oakville, Ontario, where she lives with her family and two rescue dogs.

2 thoughts on “Review: The Jane Austen Society is the Must-Read Novel of the Year”