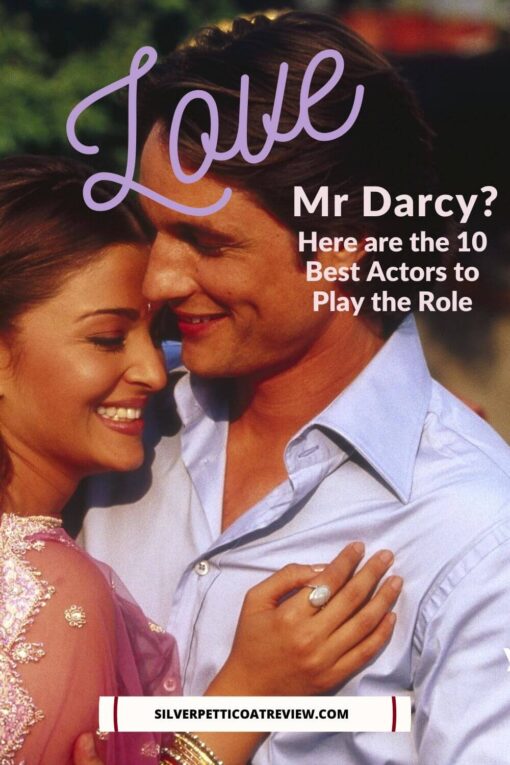 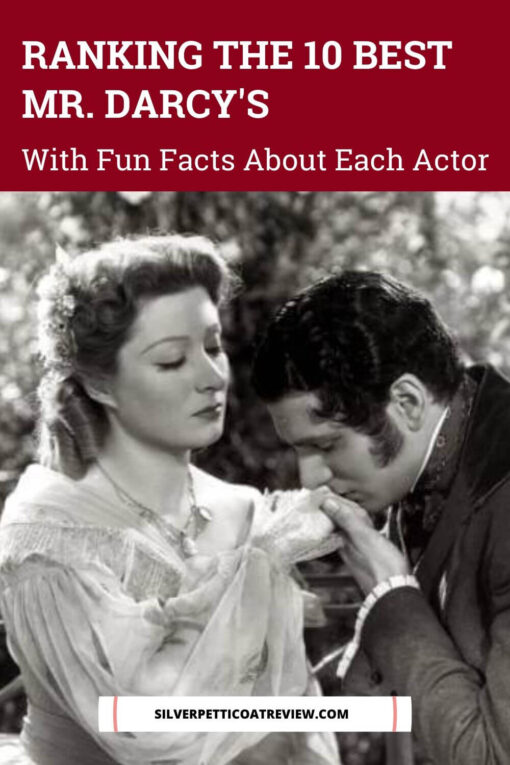 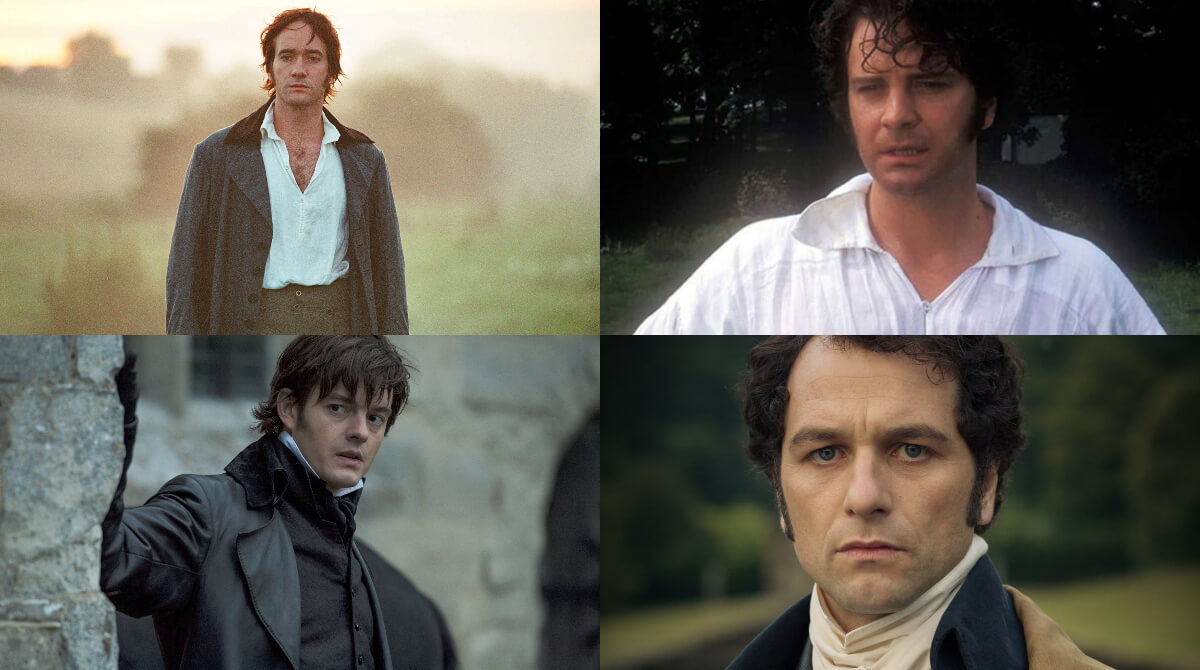 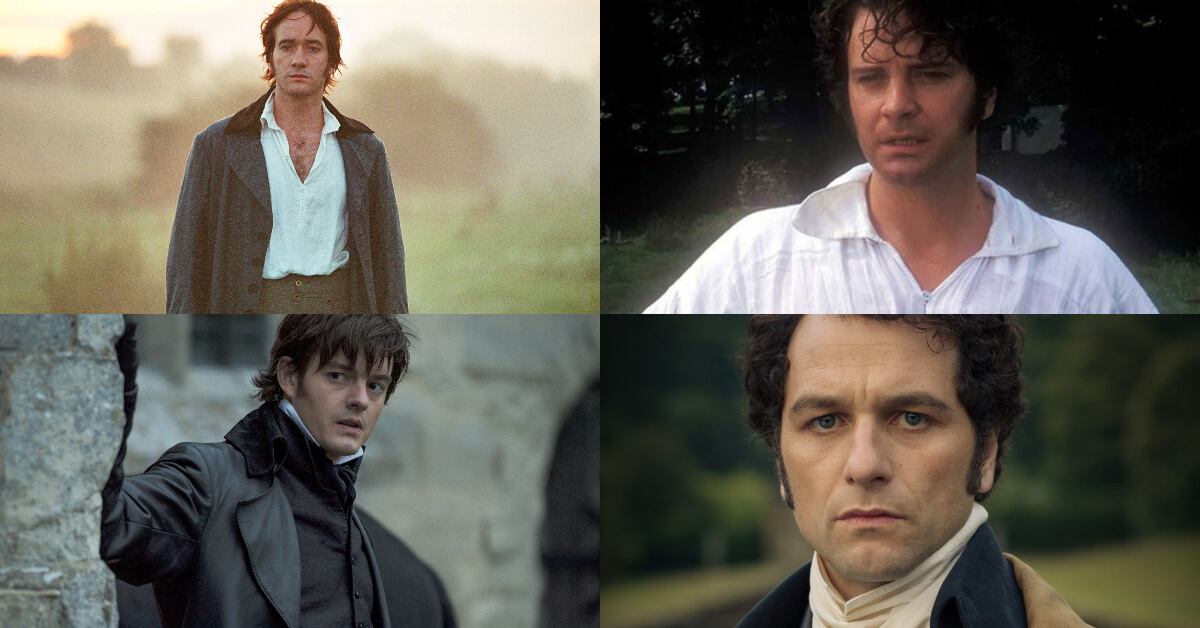 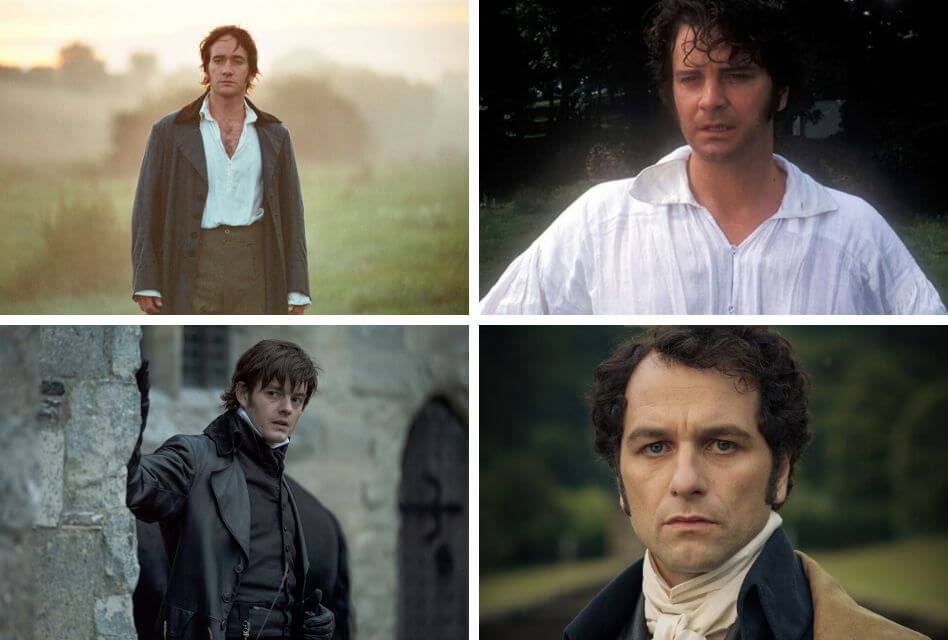 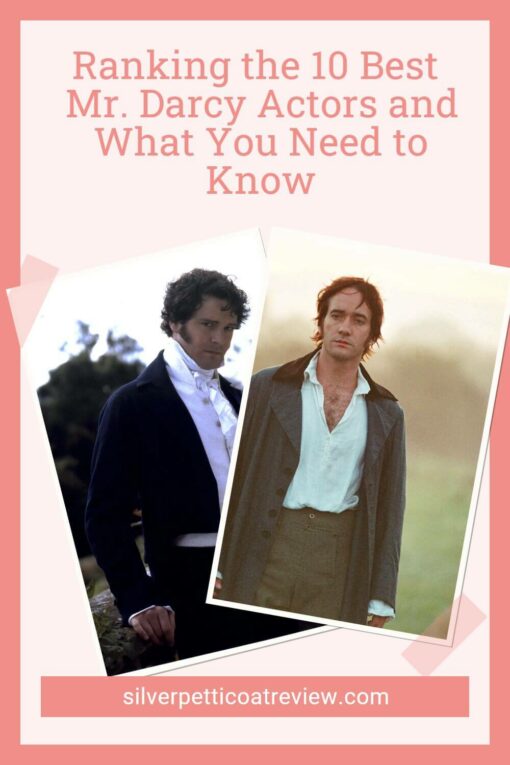 January 28, 2023, marks the 210th anniversary of the publication of Jane Austen’s Pride and Prejudice in 1813, so we thought we’d celebrate by honoring Mr. Darcy and the actors who have played him.

HOW OLD IS MR. DARCY?

In Pride and Prejudice, Mr Fitzwilliam Darcy of Pemberley, Derbyshire, is 28 years old. But as a beloved immortal character from classic literature, 2023 makes him 210 years old – in book years, that is.

Several actors over the past 100 years have played Mr. Darcy onscreen, the aloof but lovable romantic hero of Pride and Prejudice.

But playing opposite the quick-witted Elizabeth Bennet is no easy feat. These Mr. Darcy actors, however, got Jane Austen’s iconic character just right.

(With Fun Facts About Each Mr. Darcy Actor)

Colin Firth’s aunt pleaded with him not to play the part in the BBC adaptation of Pride and Prejudice. She didn’t want to ruin how she imagined Mr. Darcy since she was a young girl.

While he may have spoiled Mr. Darcy for one person, Colin Firth went on to portray the most popular interpretation.

2. Matthew Macfadyen in Pride and Prejudice (2005)

Matthew never saw the BBC adaptation with Colin Firth, so he chose not to worry about who played the part before and just got “on with it,” playing the role in Pride & Prejudice as he imagined.

Thankfully, because of his chemistry with Keira Knightley, the almost-kiss scene in the rain was added, giving a new swoony layer to Mr. Darcy.

Here is an adaptation of Pride and Prejudice with controversial creative choices such as Victorian costumes and a rom-com writing style. Initially, the film was meant to star Clark Gable, but after he turned it down, Sir Laurence Olivier took over the role.

His passionate and groundbreaking performance went on to influence future Mr. Darcy actors, including Colin Firth. Olivier also wanted his soon-to-be wife, Vivien Leigh, to play Elizabeth, but Greer Garson got the part instead, much to his frustration.

He’s the only Scottish actor on the list to play the brooding Mr. Darcy and remains a fan favorite due to his accurate, stuffy portrayal.

Rintoul continues to act on both the stage and screen, including a new part in The Crown.

Based loosely on Pride and Prejudice, Helen Fielding formed the character of Mark Darcy with Colin Firth in mind. For fun, he agreed to play Mr. Darcy yet again.

“I’d never played out a bit of self-referential popular culture mischief before,” Firth said in an interview, further intertwining himself with the classic character even more. He has played Mr. Darcy four different times.

And then there was that hilarious bit for Comic Relief with Miranda Hart and Colin Firth!

When he got the role in this continuation, Rhys worried about upsetting Austen fans with specific ideas about who Mr. Darcy is.

To prepare for the part in Death Comes to Pemberley, he decided to watch Colin Firth and copy him as best he could. Fair to say, he succeeded!

For anyone who’s ever dreamed of marrying their own Mr. Darcy, Lost in Austen is the perfect Austen adaptation. Elliot Cowan broods with precision while also paying tribute to Firth.

He successfully recreated the famous lake scene, wearing a white shirt and all. Cowan admits he did the real thing while Firth used a stand-in. And yes, it was “very cold.”

He appears in only 12 of the 100 episodes of the award-winning Web series. But his authentic modern portrayal of Mr. Darcy made an impression, and the Streamy Awards nominated him for Best Actor.

Martin Henderson wanted to do this Jane Austen variation because “it was such a fresh and new idea.” To prepare, Mr. Henderson studied the Pride and Prejudice novel as well as the BBC version so he could honor the original material.

He believed the final movie demonstrated the right balance between western and eastern film styles.  His co-star, Aishwarya Rai Bachchan, agreed, calling it a “groundbreaking” opportunity that increased the standard for diversity.

Pride and Prejudice is his mother’s favorite book, so she was thrilled when he got the part in this excellent fantasy version of the story. For research, she convinced him to watch the “only” adaptation – the 1995 production.

His intent for the character in Pride and Prejudice and Zombies then became a mix “of Colin Firth, Alex from A Clockwork Orange, Sean Connery in Dr. No and the voice of James Mason.”

No matter who your Mr. Darcy is, let’s celebrate all that’s great about Fitzwilliam Darcy. And remember, never judge based on first impressions because you might find a new Mr. Darcy to enjoy.

Who is your favorite Mr. Darcy actor? Discuss in the comments below!

4 thoughts on “Ranking the 10 Best Mr. Darcy Actors and What You Need to Know”