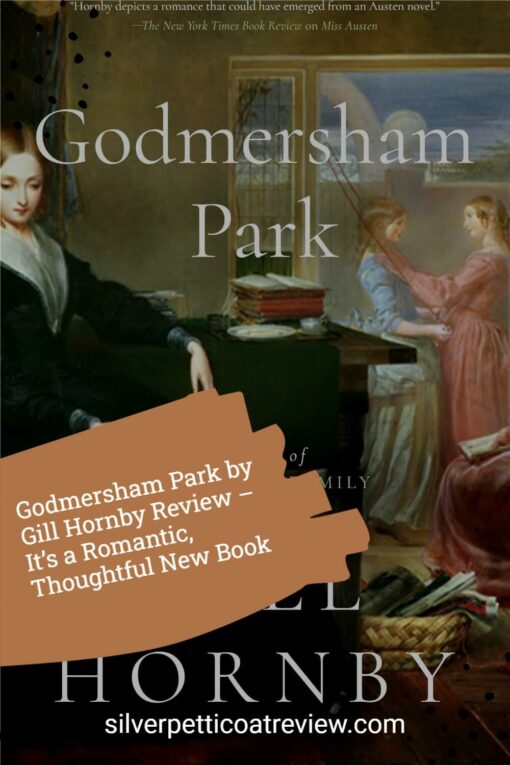 A richly imagined novel inspired by the true story of Anne Sharp, a governess who became very close with Jane Austen and her family by the #1 International bestselling-author of Miss Austen.

On January 21, 1804, Anne Sharpe arrives at Godmersham Park in Kent to take up the position of governess. At thirty-one years old, she has no previous experience of either teaching or fine country houses. Her mother has died, and she has nowhere else to go. Anne is left with no choice. For her new charge—twelve-year-old Fanny Austen—Anne’s arrival is all novelty and excitement.

The governess role is a uniquely awkward one. Anne is neither one of the servants, nor one of the family, and to balance a position between the “upstairs” and “downstairs” members of the household is a diplomatic chess game. One wrong move may result in instant dismissal. Anne knows that she must never let down her guard.

When Mr. Edward Austen’s family comes to stay, Anne forms an immediate attachment to Jane. They write plays together and enjoy long discussions. However, in the process, Anne reveals herself as not merely pretty, charming, and competent; she is clever too. Even her sleepy, complacent, mistress can hardly fail to notice.

Meanwhile Jane’s brother, Henry, begins to take an unusually strong interest in the lovely young governess. And from now on, Anne’s days at Godmersham Park are numbered.

The business of Jane Austen continues to soar in today’s publishing and entertainment industries – each book, film, or show adding something new to Austen’s world.

Godmersham Park is another delightful addition to literary books about Austen with Gill Hornby of the bestselling book Miss Austen (now being adapted by PBS), back with a new story – this time about the little-known confidante of Jane Austen – Miss Anne Sharp.

The attention to historical detail is exquisite, with page-turning prose that will keep you reading all night. Godmersham Park is part Jane Austen, part Jane Eyre, and absolutely absorbing from start to finish.

Godmersham Park uses meticulous research (partly from the detailed diaries of Fanny Austen Knight) to imagine the story and thoughts of the witty, intelligent, beautiful, although somewhat serious and thorny Anne Sharp.

In Hornby’s imagined tale, Sharp is abandoned by her father for mysterious reasons after the loss of her mother. Single and without much income, she’s forced to marry without affection or become a governess.

Anne chooses the latter – much to my respect as a reader.

She soon finds herself employed by Mr. and Mrs. Edward Austen, governess to the 12-year-old Fanny Austen.

Anne must now be on her guard and put on the role of a lifetime – that of the governess. She knows she could be dismissed at any time and for any reason. So, despite suffering from migraines, she sets out to be the best governess possible.

Meanwhile, Anne crosses paths with Henry Austen, the handsome and charming brother of Edward, her employer – who often comes to visit.

She’s torn between her dislike of him and her attraction to him. But she chooses to keep her distance because he’s married and because she’s below his station. Not to mention, she could be fired.

Still, the two are drawn together – he to her intellect and spirit – and she to his joviality and warmth.

And then there’s the question of Jane Austen – Henry’s witty and talented sister. Soon, Anne finds herself pulled into the world of the Austen family – as she deals with an unexpected friendship with Jane and an impossible attraction with Henry.

But could her connection to them, a triangle of sorts, ruin her chances to support herself as a governess?

Anne Sharp is a delightful protagonist: intelligent, thoughtful, and determined. While the novel has an overall melancholy tone, I was fascinated by Anne’s choices and thoughts.

Sharp makes intentional choices – not based on her heart – but on logic and circumstance. She’s determined to support herself. And that’s hard not to respect even if I wanted her to do a couple of things differently.

I wanted Anne to have her Jane Eyre moment – to shout to the world and admit what’s in her heart.

But that’s not who Sharp is.

I had to let go of that expectation and recognize that Anne is a different sort of character – she doesn’t have to confront the men or anyone else who mistreat her – as cathartic as that would have been to read.

She doesn’t have to claim equality and her freedom. Anne is a character based on a real person who lived in a world of inequality and a lack of choices.

She chose the best ones possible and ultimately created an independent life for herself as a teacher. And it was full of happiness, friendship, and love, against all odds.

Oh, how I loved reading about Henry Austen! He’s given the romantic treatment here, although since he’s married, you know things aren’t quite going to work out. I only wished for more scenes with Henry.

Then there’s Jane Austen. Hornby brings her to life with ease! Even though Austen doesn’t appear till about halfway through the book, she becomes a significant person in Sharp’s life – even more so than Henry.

The two intellectual women meet under less-than-ideal circumstances and instantly connect. And the more they get to know each other, the more they become attached.

But life and circumstance are against them and their friendship.

Overall, Godmersham Park is a great historical fiction read anyone who’s experienced unrequited or impossible love will relate to – even if I wanted a little more emotional resonance from the ending.

But the book is based on historical figures, after all. So, even if I wanted a slight rewriting of history, it’s hard not to appreciate and enjoy what is a splendid addition to the literary world of Jane Austen!

Ultimately, Godmersham Park is a historical fiction book that takes historical facts seriously, albeit with a couple of surprising liberties. It’s witty and well-written, and I wholeheartedly recommend it.

Godmersham Park would make an excellent film or limited series. And since Miss Austen is already being adapted as a four-part miniseries, it’s certainly possible this film could receive similar treatment if Miss Austen does well.

Miss Sharp would make a unique protagonist in an Austen-inspired film that I would love to see on the big or small screen.

MORE ABOUT THE GODMERSHAM PARK BOOK

Gill Hornby is the author of the novels Miss Austen, The Hive, and All Together Now, as well as The Story of Jane Austen, a biography of Austen for young readers. She lives in Kintbury, England, with her husband and their four children.