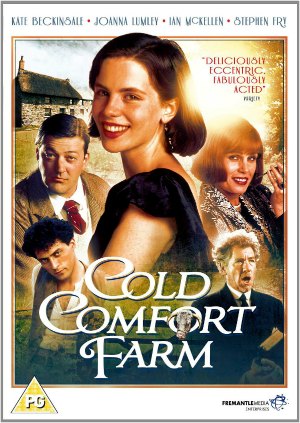 Way back when, I rented this film and promptly forgot about it. Since it’s quite memorable I really don’t know how this happened. Yet I begin this review with no truer words. Only in the last few months did it spring to mind when one of my period drama searches turned this up. Because of that, a new interest was rekindled and though I couldn’t remember whether or not I liked it, I was ready to rediscover this one.

Kate Beckinsale plays Miss Flora Poste, a recent orphan who has very little to her name. An aspiring author who’s really not very good, Flora winds up staying with her good friend (Joanna Lumley), but only for a short while. After all, she needs something to “tidy.” This inspires her to write to all of her distant relatives and decide from among them who sound most interesting to stay with. Her curiosity is piqued when she receives a letter from her cousin Judith (Eileen Atkins), whose mother Ada once saw something “nasty” in the woods. Among their brood are Judith’s son, Seth (Rufus Sewell), Elfine (Maria Miles) and the preacher of the family, Amos (Ian McKellen). All of whom reside at Cold Comfort Farm under the controlling voice of Ada Doom.

If only one word could describe this film, it would be quirky. This story has the definition of the word cornered. That being said, I cannot help but adore this whimsical 1930s comedy. There is something uniquely singular about it that I find, not only amusing but curious. The comedy balances its hilarity with bursts of sweet romance here and there really well. From the stark opening (shot in black and white) to the ending, everything that takes place layers the places, people and events with hilarious fun, and I think a second viewing left me with a more favorable opinion. Flora’s charming personality is sure to win over audiences as soundly as she does her crazy family members. Her sweet interference is just what the film needs to soften the otherwise unbalanced cast of characters; and oddly enough, I couldn’t help but think of A&E’s Emma (which also starred Kate Beckinsale) while watching this. The progression of Flora’s influence is a brilliant example of good writing as is the acceptance of her that her relations extend. 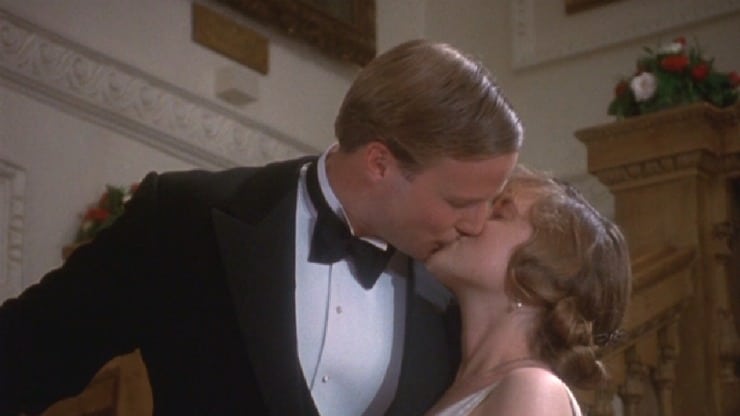 The cast list drips with talent and also includes a young Rupert Penry-Jones (Persuasion, The 39 Steps) as well as Miriam Margoyles (Miss Fisher’s Murder Mysteries). Meanwhile, Kate Beckinsale is tailor-cast in these “stiff upper lip” period films. She plays the society girl with aplomb to great success. In fact, this might be the best role I’ve seen her play. She has a kind of presence when she plays these characters who know best. It’s really entertaining to watch the change she provokes in the lives of these characters. In short, the character of Flora Poste quite suited her.

Putting aside the cast, this film succeeds even without the star power. This is partially because most of these stars don’t look themselves, but also because it’s a weirdly addictive little comedy. There isn’t the same kind of grandeur other ’30s era films possess because the settings are in the country side, but the one ball we are swept inside is lovely as are the two little romances that blossom. If there are any faults, they lie in two things. The first being the flurry of characters we are thrust into meeting. In a sense, that’s part of the “charm,” because it’s meant to be a direct counter to Flora’s ordinary world. Aside from knowing that Starkadder’s “have and always will live at Cold Comfort,” I’m still unsure who everyone is. Secondly, there can be the lack of completion to every detail. While some will surely be bothered by this (given the repetitive nature of these events), in reality the loose threads probably suit the story better. When all’s said and done, I loved every second of living in this vibrant world, even if only for a little while.

Have you seen Cold Comfort Farm? Tell me your thoughts down below…

Cold Comfort Farm is available on DVD, to rent on Netflix and Amazon’s Instant Video service.

Our romance-themed entertainment site is on a mission to help you find the best period dramas, romance movies, TV shows, and books. Other topics include Jane Austen, Classic Hollywood, TV Couples, Fairy Tales, Romantic Living, Romanticism, and more. We’re damsels not in distress fighting for the all-new optimistic Romantic Revolution. Join us and subscribe. For more information, see our About, Old-Fashioned Romance 101, Modern Romanticism 101, and Romantic Living 101.
Pin this article to read later! And make sure to follow us on Pinterest.
By Rissi JC on October 13th, 2015