When I was a senior in college, one of my housemates introduced the rest of us to a show she enjoyed. It was a Japanese drama called Hana Yori Dango, or Boys Over Flowers. Quickly, we all became obsessed with the story. So, when I learned there was a 2012 Korean version of the same story, I knew I had to check it out. 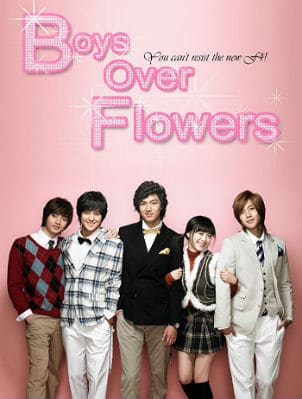 The story opens with an explanation of what the Shinhwa schools are: schools for the children of the wealthiest families in Korea.

Boys Over Flowers then follows a young high schooler named Jan-di who can’t even dream of attending one of these exclusive schools. One day, while doing a delivery for her family’s dry-cleaning business at the exclusive Shinhwa High School, she saves the life of a student who is trying to commit suicide due to severe bullying. In fact, after he was named a target by F4 (four wealthy and attractive young men who rule the school), he is violently bullied by the entire school which leaves him desperate.

After Jan-di saves this young man’s life, Shinhwa High School begins to face a public backlash. To save face, Jan-di is soon offered admission as a scholarship student, to give the school some better press. She does not want to attend. However, between pressure from her family and a chance to join the swim team, she gives in.

Right from the start, Jan-di does not fit in at Shinhwa, especially when she encounters F4 for herself. F4 is made up of four young men, Gu Jun-Pyo, Yun Ji-hu, Lee Jeong, and Song Wu-bin. When Jan-di stands up to Jun-Pyo after he humiliates her only friend at school, she becomes a target. Jun-Pyo and the entire student body try to make Jan-di so miserable that she will leave. She is stubborn, however, and refuses to back down.

She also soon catches Jun-Pyo’s attention by her refusal to be intimidated or chased away by him. He begins to fall for her, and, eventually, she begins to fall for him as well. Of course, this is a drama, so the road to true love is not going to be smooth. This story has it all. Love triangles, misunderstandings, amnesia, and the conflict that is brought about by being in different social classes all play a part.

Jan-di is a plucky young lady who does not take insults lying down. She is protective of her friends and family which is what initially gets her targeted by F4. And it is her kind yet feisty personality that attracts both Jun-Pyo and Ji-hu to her. She is also a driven young lady with goals to become a champion swimmer and a doctor.

Jun-Pyo is the leader of F4, who have all been friends since they were in kindergarten. He starts out the series as an arrogant jerk who does not care for the feelings of people around him. Except for maybe the other members of F4. He appears callous and uncaring, even putting ducks in the pool to disrupt Jan-di’s swimming time. However, he finds himself drawn to her sweet but fierce nature. His personality is softened by his feelings for Jan-di.

Ji-hu is the sole survivor of a car crash that killed his parents when he was a child and the grandson of a former president. He is shy. He is also very musically talented. In a series of strange coincidences, he seems to always be around to help Jan-di when she needs it. Sometimes he gives her shoes and sometimes he saves her from an attack. In the end, he becomes a doctor like Jan-di. One little girl calls him “Doctor Prince.” He, Jun-Pyo, and Jan-di make up the main love triangle of the series.

Lee Jeong is not only wealthy, he is also a skilled potter with a reputation as a bit of a playboy. Eventually, he becomes protective of Jan-di and begins to develop feelings for her friend Chu Ga-el. Song Wu-bin is the last member of F4. He is the heir to a construction company that has ties to the underground. He is caring, but kind of intense.

Okay. Here’s the thing. I have this problem when I watch the Japanese version. If I were to ever read the manga, I believe I also would have the same issue. The show focuses on the romance between Jan-di and Jun-Pyo. I get that. However, I’ve always preferred her with Ji-hu. I just think he’s a genuinely nice guy who protects her and deeply cares about her. I thought that the ending was a little more open-ended in this version, though. Maybe she did chose Ji–hu? This idea makes me happy. I thought that this version made their romance a bigger deal in general. Which I enjoyed.

However, as viewers, we’re supposed to root for Jun-Pyo and Jan-di. Once he stops trying to get rid of her, he immediately falls for her sweet and sassy personality. He even buys her a pair of expensive swimming goggles. Jun-Pyo actually becomes a little sweet himself at times, though only when he’s around Jan-di.

Still, their romance is rocky at times. This is because of class struggles, his arrogant nature, his mother, love triangles, and amnesia. Since they both kept fighting for each other through most of the series, I suppose they can have their happy ending. However, I kept thinking that she could do better. I thought he was selfish and rude, personally, but that’s just me.

There are a couple of side romances in this series as well. One of these is a gradual romance that is sweet. I enjoyed watching this romance unfold. The side romances add to the story and don’t detract from the main couples, which I enjoyed.

While the Japanese version of this drama holds a special place in my heart, I love the Korean version as well. The story is full of drama and suspense. While this can be a little overwhelming at times, I found myself wishing that they could just have a happy ending after all! I think this is because the characters are so likable.

Even Jun-Pyo, who is not my favorite character, had enough redeeming qualities that I couldn’t quite hate him. This might be because of the story, the actors, or a combination of both.

There are several other versions of Boys Over Flowers. These include the Japanese manga and the Japanese anime. called Hana Yori Dango. Meteor Garden, produced in Taiwan, is another adaptation, and there are live-action shows that have been made in Japan, Korea, China, India, and Taiwan.

If you are looking for a new Kdrama to check out or are a fan of one of the other versions, 2012’s Boys Over Flowers is worth a watch. It is twenty-five episodes of fluffy, drama-filled fun with compelling characters and a whole lot of heart.

Where to Watch: Boys Over Flowers is available on Dramafever, Viki.com, Hulu, and Viu.

Content Note: TV-14. This is a drama set during high school and college, so there are scenes of drinking. There are also instances of serious bullying, sexual assault (though not explicit), references to suicide, and attempted suicides.

Have you seen Boys Over Flowers? Which one is your favorite? And do you prefer Jun-Pyo or Ji-hu? Let me know in the comments!

Our romance-themed entertainment site is on a mission to help you find the best period dramas, romance movies, TV shows, and books. Other topics include Jane Austen, Classic Hollywood, TV Couples, Fairy Tales, Romantic Living, Romanticism, and more. We’re damsels not in distress fighting for the all-new optimistic Romantic Revolution. Join us and subscribe. For more information, see our About, Old-Fashioned Romance 101, Modern Romanticism 101, and Romantic Living 101.
By Bailey Cavender on April 14th, 2018

9 thoughts on “Boys Over Flowers, a Fun and Fluffy Bingeable K-Drama With Romance and Heart”