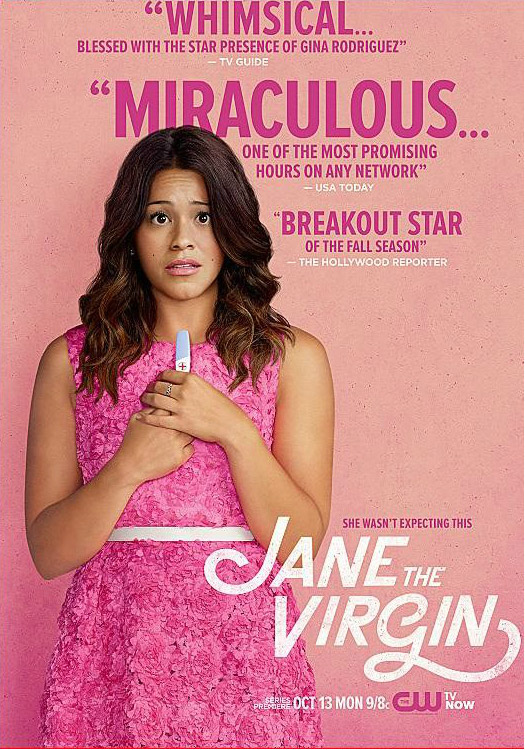 THE SETUP: Jane, a young woman (and also a virgin) in her 20s, is artificially inseminated by accident. 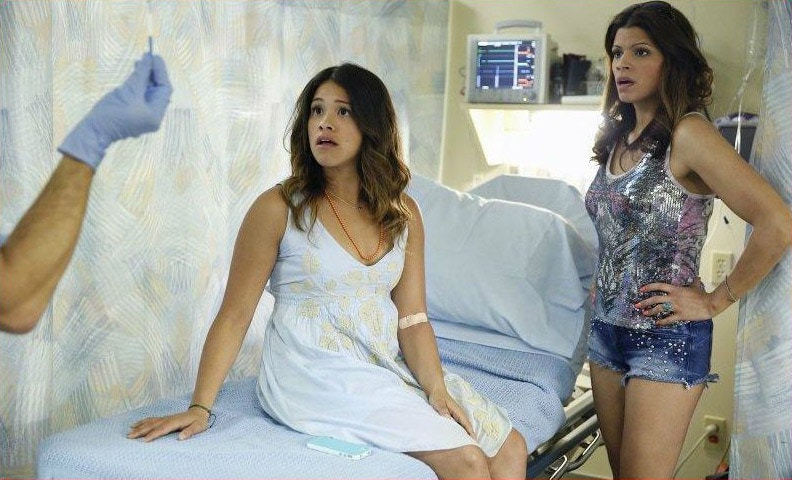 Jane the Virgin is one of the best and most promising new shows of the Fall TV Season so far with great characters, good writing and a zany premise. Based on a Venezuelan telenovela, this show embraces some soapy additions, while also being dramatically engaging. What really sells the series (besides the clever dialogue) however, is Gina Rodriguez as Jane Villanueva. She is a breakout star for sure who we will no doubt see more of from here on out. Like a young America Ferrera, she will steal everyone’s heart in the first five minutes. And if you’re in need of an Ugly Betty fix as much as I was, this may be the perfect series to tune into. Basically, if you don’t take shows too seriously and appreciate a female driven, diverse cast, then you may love this show as much as I did.

One thing I really liked about the series is the promise of romance between Jane and the father of the baby. They had a connection in the past that really makes this whole situation they’re stuck in more interesting. While she has a boyfriend (many might even root for), I was immediately drawn to the chemistry between Jane and Raphael. So, I already know what “team” I’m on.

There’s also a lovely relationship between the three generations of Villanueva women. There’s Jane, her mother (who had Jane when she was a teenager) Xiomara and the grandmother Alba. The interactions between them show real family dynamics with women having real conversations (even if a bit satirized for effect). I look forward to seeing more of this family and getting to know who each of them are.

By the end of the first episode, there’s a hilarious twist that will introduce all sorts of engaging developments for the future. I don’t want to give it away, but when you watch the episode you’ll know exactly what the twist is and hopefully laugh (in a good way) as much as I did.

After the episode, the audience was given a sneak peek of what’s to come in a music video promo with lots of promising clips that hopefully will hook people to future episodes. From my perspective, this extended preview was a very smart move and more shows should follow suit.

In all, while I wouldn’t say Jane the Virgin is as good as Ugly Betty, it’s still very funny with memorable characters, great casting, good writing and hilarious twists and turns that will keep people tuned in weekly. And while the pilot episode isn’t perfect, it’s clear to see the writers are already on their way to developing a fantastic series with a unique voice and a fun premise people will remember for years to come. If only people will give it a chance…I rate it 4 1/2 corsets with 5 vintage hearts for romance. 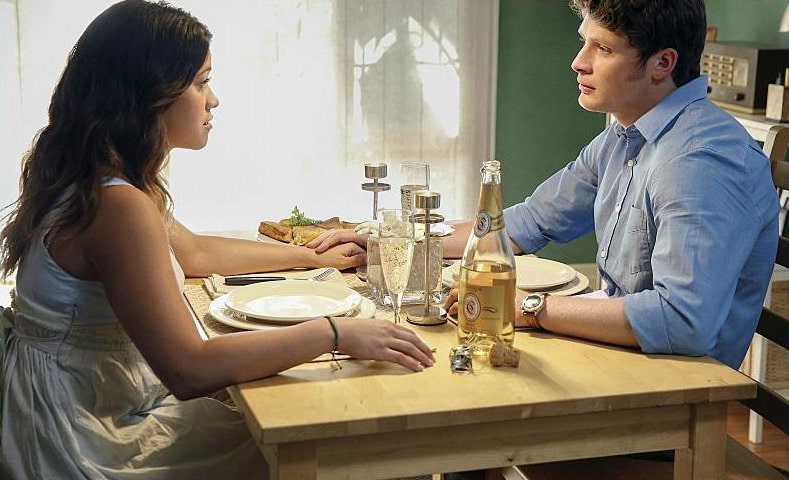 In the style of Ugly Betty, Jane the Virgin remakes a popular telenovela for American audiences. The result is both adorable and charming with writing that will make you smile and even laugh out loud. While the title sounds slightly wonky, don’t let appearances scare you off. With a similar type whimsical humor as Pushing Daisies as well (narrator and all), I knew this was a keeper within the first minute, a keeper easily enjoyed for those who don’t take the show too seriously. Understanding why Jane holds onto her virginity so tightly is downright hilarious, the ridiculous flower analogy pure comedic gold.

Aside from the stellar writing, the cast lives up to all the hype, particularly due to the star quality of the leading lady. Gina Rodriguez is so likable that she will have audiences around the world rooting for Jane… if they give the show a chance that is. For those who loved Ugly Betty, there are even some welcome similarities (without being TOO similar), including the single mother that had a child too young (Jane’s mother reminds me A LOT of Hilda), living at home with Jane’s grandmother instead of Betty’s father, a playboy, and even a Wilhelmina Slater. You see, the father to Jane’s baby is married to a master schemer. While the wife isn’t nearly as equal to Vanessa Williams’ comedic genius, the soapy scheming to hold onto her husband (and his money) seems already like a fun time!

The potential love triangle is also rather compelling. As Jane becomes engaged to her two year cop boyfriend (who seems to have a secretive past), she’s already met the father (a playboy) years before and shared a magical kiss. Both guys are intriguing, but I already find myself rooting for Raphael (the father and playboy). Overall, while I do see a couple of hang ups (such as extremely religious Jane being so nonchalant about considering getting an abortion), this is an enjoyable show I hope to see last a long time. Something needs to fill my Ugly Betty void. I rate Jane the Virgin 4 and ½ corsets and 5 vintage hearts for romance.

What did you think of Jane the Virgin? Let us know in the comments.

Our romance-themed entertainment site is on a mission to help you find the best period dramas, romance movies, TV shows, and books. Other topics include Jane Austen, Classic Hollywood, TV Couples, Fairy Tales, Romantic Living, Romanticism, and more. We’re damsels not in distress fighting for the all-new optimistic Romantic Revolution. Join us and subscribe. For more information, see our About, Old-Fashioned Romance 101, Modern Romanticism 101, and Romantic Living 101.
Pin this article to read later! And make sure to follow us on Pinterest.
By The Silver Petticoat Review on October 15th, 2014