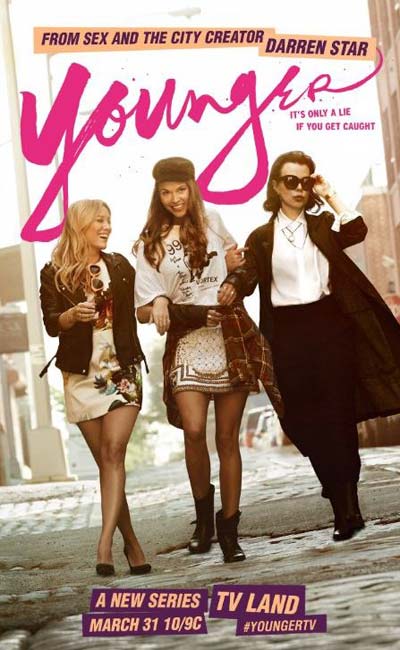 WHERE: TVLAND (Pilot episode is available on Hulu and Amazon Instant Video)

Due to serious Bunheads withdrawal, I was really excited to see the adorably funny Sutton Foster finally headlining another TV show, and for the most part, Younger does not disappoint.

After being left by her husband for a younger woman and forced to sell her house (thanks to her ex’s gambling debts), Liza Miller has very little to look forward to in life. Not only did her husband leave her, but her daughter’s in India and she has no job to top it all off. No one wants to hire an “older” woman who took a break from the publishing world for 15 years to raise a daughter after all. Liza just seems stuck.

Then she meets a cute guy at a bar who mistakes her for being in her 20s (I get the sense Josh will stick around as a love interest). Suddenly, her best friend (played by the hilarious Debi Mazar) has an idea: why not pretend to be 26? Liza has always looked younger.

With a new look, new gmail account instead of AOL and knowledge of One Direction, Liza is ready to begin interviewing. And this time it works! She has a new job working for the divorced 43 year old big time editor Diana Trout, who likes to make “younger” women suffer. She becomes friends with Hilary Duff’s character Kelsey, who promises to help her live through Diana’s demands in the process. Of course hilarious antics ensue as Liza doesn’t quite act like she’s 26…

While some of the jokes are over the top (including too much focus on Liza’s “bush”), Sutton Foster is so likable that you can’t help but root for Liza’s new endeavors. You want her to be happy and will likely empathize with her dilemmas.

As for the romance, at this point, it’s unclear if it will become interesting or not. I’m not sure how I feel about the younger guy that works in a tattoo parlor. Depends on where they take it. Still, it’s refreshing to see a woman dating a younger guy for a change. Of course there is the twist of Josh not knowing how old she really is…

Overall, this is an enjoyable sitcom that has a lot of room for growth. Yes, some of the humor doesn’t work (the differences between women in their forties and women in their twenties is over exaggerated to a ridiculous and shallow degree at times), but that doesn’t take away from the show’s enormous potential. If you’re looking for a lighthearted comedy with a fabulous female character in the lead, Younger is well worth your time. Hopefully, a few of the kinks will work out in future episodes.

Will you be tuning into Younger? What are your thoughts on Sutton Foster’s new show? Sound off in the comments…

Our romance-themed entertainment site is on a mission to help you find the best period dramas, romance movies, TV shows, and books. Other topics include Jane Austen, Classic Hollywood, TV Couples, Fairy Tales, Romantic Living, Romanticism, and more. We’re damsels not in distress fighting for the all-new optimistic Romantic Revolution. Join us and subscribe. For more information, see our About, Old-Fashioned Romance 101, Modern Romanticism 101, and Romantic Living 101.
Pin this article to read later! And make sure to follow us on Pinterest.
By Autumn Topping on March 31st, 2015