THE MOMENT: Miss Fisher and Jack share a martini and their fortunes as Jack’s feelings come out, if only in subtext.

Who doesn’t love a good battle of the wits? From the very beginning of the series Miss Fisher’s Murder Mysteries, the audience is given treat after treat of intelligent bantering between Lady Detective Phryne Fisher and Detective Inspector Jack Robinson. Miss Fisher always knows how to work her way in on a case much to Jack’s (or so it would seem) chagrin. But even he couldn’t resist the charm of this modern woman for long, gradually making them unofficial partners more than anything else.

The series 1 finale brought them even closer as he not only filed for divorce (married for years only in name) but helped Phryne put to rest the mystery of her missing and murdered sister (carrying her out in epic, grand style after being poisoned was just an extra bonus). …the romantic teasing between the two leads just gets more dynamic with each passing episode.

Now in series 2 and only two episodes in to Acorn’s online streaming event for this Australian import (one a week for 13 weeks), the chemistry and the romantic teasing between the two leads just gets more dynamic with each passing episode. In this past weeks’, “Death Comes Knocking,” Phryne and Jack investigate some spiritualists after an unfortunate murder in a graveyard that leads them to look into the death of her Aunt Prudence’s less than stellar godson from back in the war. But what makes this mystery of the week so fantastic is that a spiritualist psychic allows for some fun romantic play in the script. Case in point, when Jack first meets the psychic, she grabs his hand and warns him: 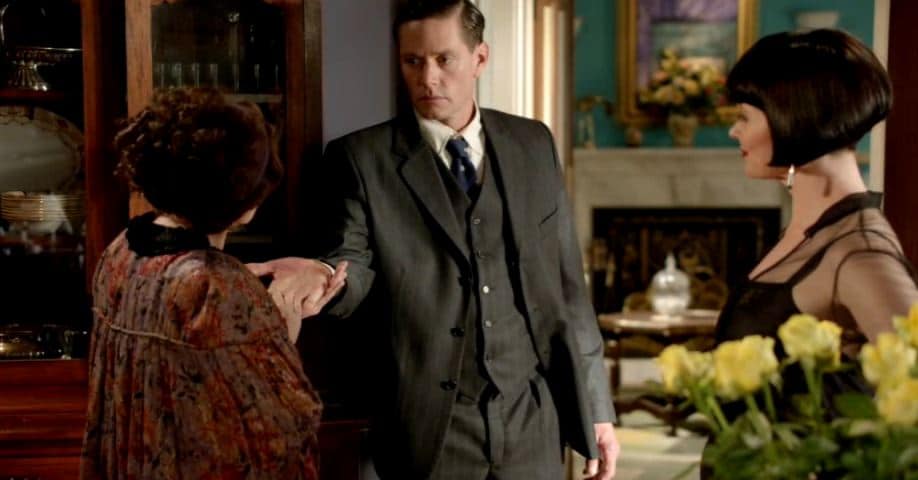 Of course, Miss Fisher is looking on at this point VERY interested. Even Jack can’t help but glance over at Phryne, the subtle glances revealing the hidden emotions behind the pairing and also implying who he considers to be his “true love.” 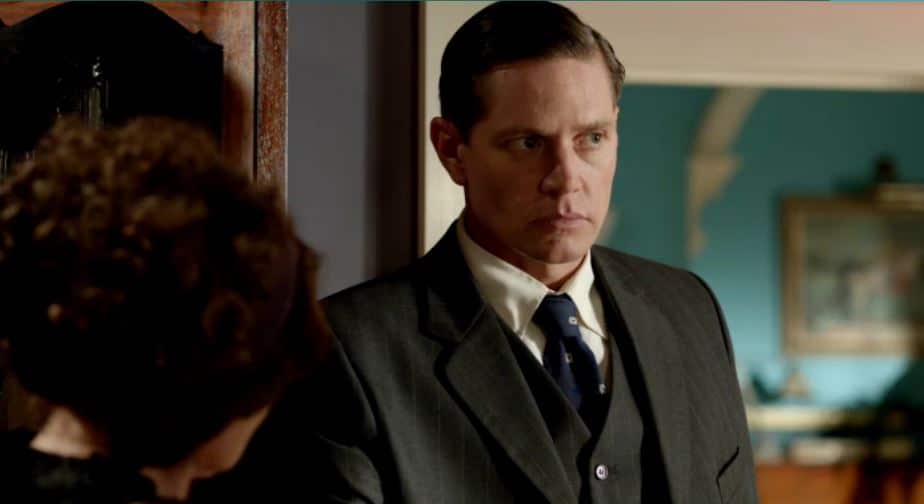 As the episode continues, Phryne typically has a new dalliance with a man, the psychic’s manager who later becomes a suspect in the case. When he does, Jack can’t help but learn of their time in the ‘boudoir,’ much to his clear distaste with maybe even some jealousy going on not too deep beneath the surface. This ‘jealousy’ and hand reading of Jack’s, lead to my choice for romantic moment of the week.

Almost every episode, the series ends on a drink and witty banter between Phryne and Jack. This week was no different but I loved the subtext in this one especially. For after talking about their case of the week, Jack can’t help but bring up Phryne’s lover as being in the clear. Phryne cheekily responds: PHRYNE: I presumed as much, otherwise you wouldn’t have let him leave the country.

Jack just takes a drink because we and she know exactly why Jack helped the romantic threat leave the country, he even pointing it out. Now that Hamilton is out of the way, he changes the subject. Jack can’t reveal TOO much of his inner feelings, returning to more flirty sparring between the two, claiming ‘disappointment’ about the psychic for now he would “never know what the future holds for” him. Phryne just laughs and holds her hand out with a psychic story of her own: 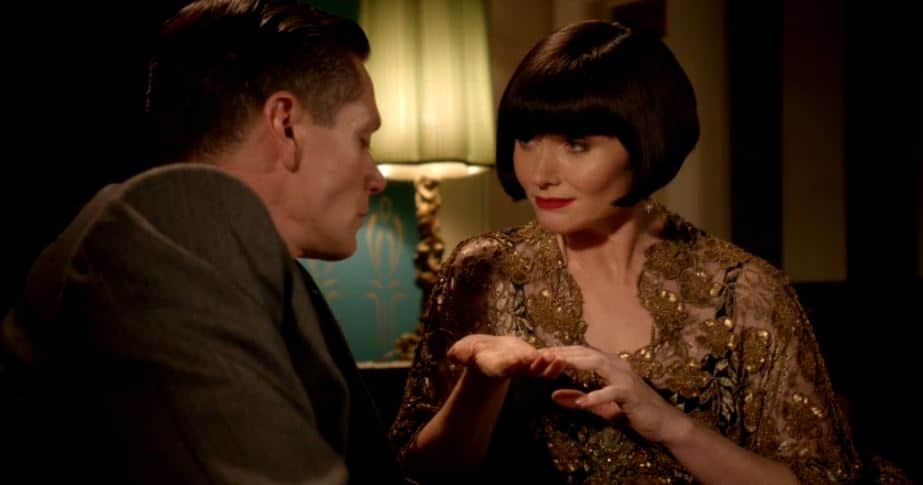 PHRYNE: A fortune teller once told me that I would marry well, have 4 children, and play a lot of croquet. What do you think of that?

JACK: I can almost seeing you play croquet. 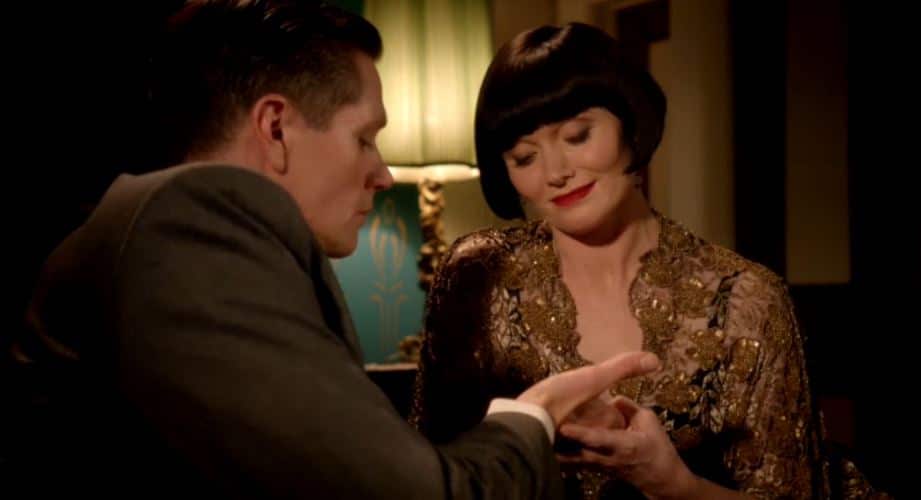 Jack takes out his hand and Phryne takes it as if she is now the fortune teller, boldly offering her own personal insight into the Detective Inspector, she taking a more serious tone of voice and expression:

PHRYNE: I see a very careful man who professes to be cynical in the face of mysteries he can’t explain. (Pause). And claims to have no passions in spite of a heart that runs as deep as the Pacific Ocean.

The atmosphere sizzles with chemistry and attraction, clearly their hearts belonging to one another as they stare into each other’s eyes for this one quiet moment, a moment that cannot last of course if the writers want to continue with their teasing and build up. 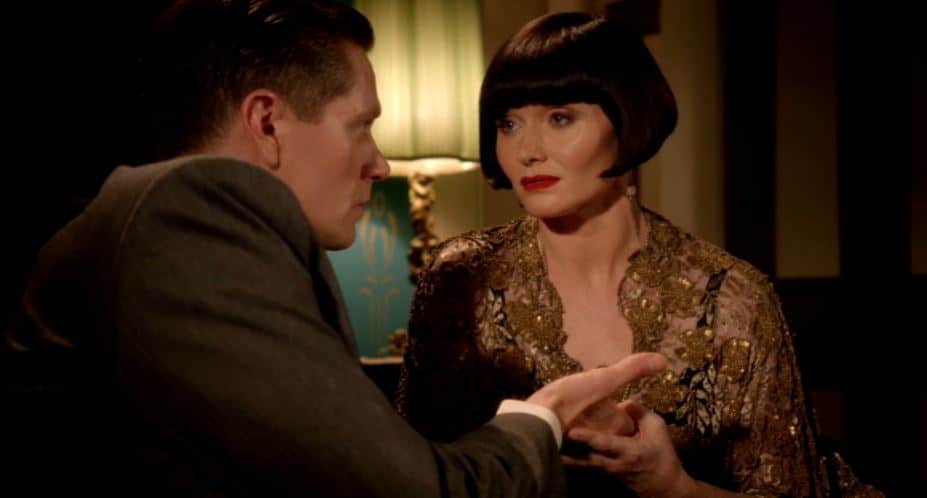 Jack breaks the mood and leans down to stare into his hand, making sure to have the last word as he snarkily and flirtatiously adds with tongue-in-cheek: JACK: That’s strange. All I can see is another martini.

Their eyes meet again but this time with more sensual and playful looks, the episode ending on two sassy smiles. I don’t know about everyone else but the sparring with each episode just gets better and I can’t wait to find out what happens next with Australia’s best Lady Detective and Handsome Detective/Inspector!

Anyone else love Jack and Miss Fisher? Excited for the next episode or even next season? Sound off below…

Our romance-themed entertainment site is on a mission to help you find the best period dramas, romance movies, TV shows, and books. Other topics include Jane Austen, Classic Hollywood, TV Couples, Fairy Tales, Romantic Living, Romanticism, and more. We’re damsels not in distress fighting for the all-new optimistic Romantic Revolution. Join us and subscribe. For more information, see our About, Old-Fashioned Romance 101, Modern Romanticism 101, and Romantic Living 101.
Pin this article to read later! And make sure to follow us on Pinterest.
By Autumn Topping on January 18th, 2014

5 thoughts on “Romantic Moment of the Week: Jack and Miss Fisher”