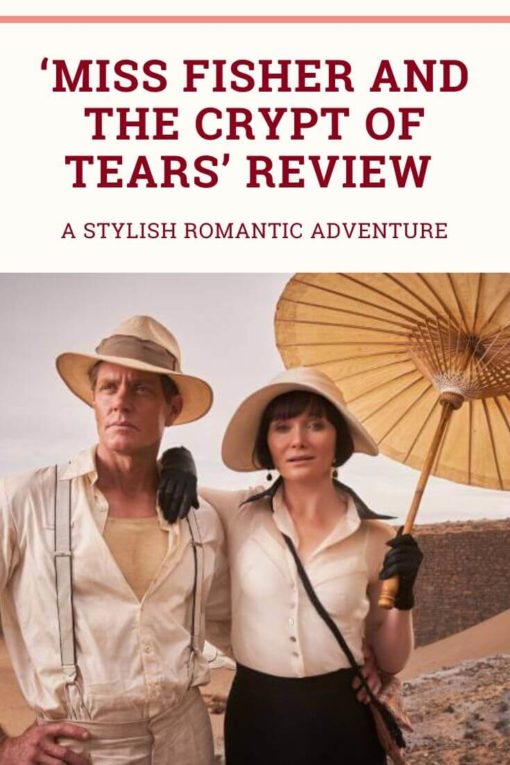 Essie Davis and Nathan Page return in the epic new Miss Fisher movie, Miss Fisher and The Crypt of Tears! Let’s celebrate and discuss the chemistry, the costumes, and why we deserve another movie.

Miss Fisher is back! Finally, five years after the last series ended (the first three seasons now stream exclusively on Acorn TV), our favorite female detective returns, and she returns in glorious style, gold handgun and all. Miss Fisher and the Crypt of Tears released this week as an exclusive Acorn TV feature film. And the excruciatingly long wait was worth it! With absolute certainty, I attest that this romantic mystery is just what the doctor ordered as good, escapist entertainment.

For the uninitiated into the fabulous and fashionable world of Miss Fisher, the original Australian series is a 1920s period mystery. Vivacious, intelligent, and particularly independent for the period, Miss Fisher returns to Melbourne and begins a career as a private detective, much to the dismay of the handsome Detective Inspector Jack Robinson.

Eventually, Phryne wins him over with her charm as they solve crimes together and slowly fall in love (even though she isn’t the marrying type at all.)

The original series based on Kerry Greenwood’s novels is exciting, hysterical, and sweet (don’t forget the adorable romance between Phryne’s assistant Dot and constable Hugh). Did I mention unabashedly romantic? Oh, how I loved the passionate stares between Jack and Phryne. A dance here, a flirty look there, and maybe even a kiss to build the momentum.

However, let’s not forget the real star: Miss Fisher’s sensational wardrobe. Exquisite in detail and elegant, sometimes outlandish in the best of ways, each of Phryne’s chic outfits emphasizes not only the time period but also her independent and flirtatious personality. She’s a woman who loves being a woman, and she won’t apologize for it.

Plus, she refuses to follow the rules set out for her gender. Thankfully, Miss Fisher and the Crypt of Tears continues to recognize how vital Phryne’s wardrobe is to the product of this lively and fabulous female character.

The new fan-funded movie, while filmed much later, continues presumably only a few months after the last episode. (Although it also works as a standalone.) This time, however, Phryne, our private detective, solves crimes on a much more global scale, the opening scene in British occupied Palestine reminiscent of James Bond or an Indiana Jones film. (With Miss Fisher’s stylish costumes as important as Indy’s whip.)

Sure, I miss the Australian setting. But presenting Miss Fisher and Detective Inspector Jack Robinson as a mystery-solving duo traveling the world works seamlessly for the romantic adventure genre, which is what the new movie is: a romantic adventure in the style of an old-fashioned adventure serial.

Near the beginning, after rescuing Shirin, a girl from unjust imprisonment, Phryne is presumed dead. Soon after, several friends and family go to London to mourn the loss, including Jack. He travels to grieve over Phryne with a broken heart only to realize she’s not dead at all!

Unfortunately, the two are more estranged than the last time we saw them, and Jack wants nothing to do with her. How will Phryne seduce and charm him back all while solving an international crime?

Meanwhile, ancient curses, treasures, imperialism, and Alexander the Great collide as Phryne and Jack set out to discover the mystery behind the massacre of Shirin’s family. Not to mention how all the strange pieces connect.

Indeed, while Miss Fisher’s Murder Mysteries initially was a cozy mystery series, The Crypt of Tears is more supernatural with a mystical, archaeological bent.

Furthermore, it isn’t the mystery that stands out here at all. Instead, it’s about romance. The drama. The adventure.

Assuredly, the romance between Jack and Phryne still smolders. You’ll swoon as the two argue, flirt, and save each other from danger. And yes, there may even be quicksand. Miss Fisher and the Crypt of Tears offers up an excellent romantic adventure that we sadly never get anymore (Does anyone else love The Mummy?!).

Honestly, the stylish film succeeds because the filmmakers wholeheartedly embrace romance. While the movie’s mystery falters at times with the pacing and reveals and, yes, I wish Dot and Hugh did more than their cameo appearances, I don’t care because what does succeed is why I watch the genre in the first place.

Overall, once you accept the movie as an old-fashioned, yet fun, sensational, romantic adventure movie with a feminist twist, you’ll overlook the weak components of a rushed mystery. The film never aims to be a serious award winner, and that’s refreshing. Plus, for the Jane Austen fans, there’s also Rupert Penry Jones as a bonus. Enjoy! You won’t be sorry.

Where to Watch: Acorn TV

Content Note: NR but it only has mild innuendo and mild violence.

What did you think of Miss Fisher & the Crypt of Tears? Did you enjoy it as much as we did? And what about that ending? Let’s discuss it!