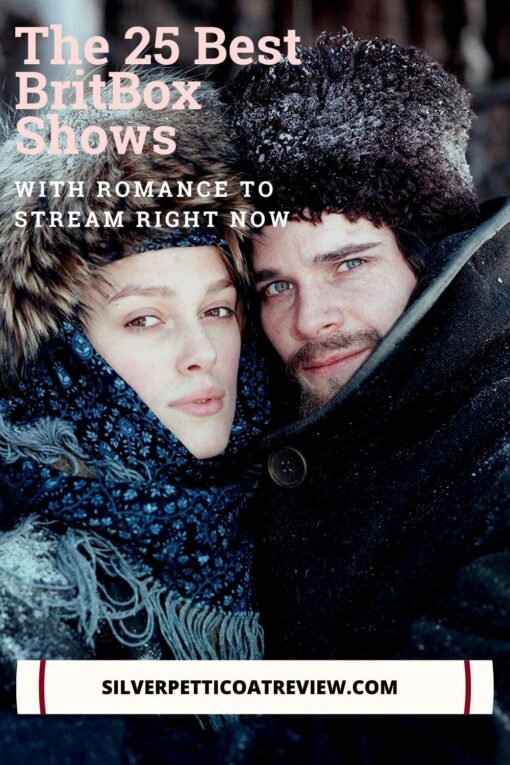 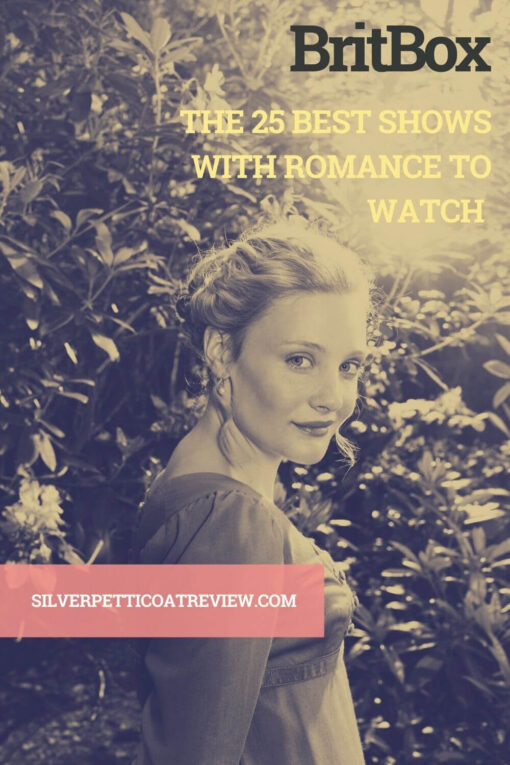 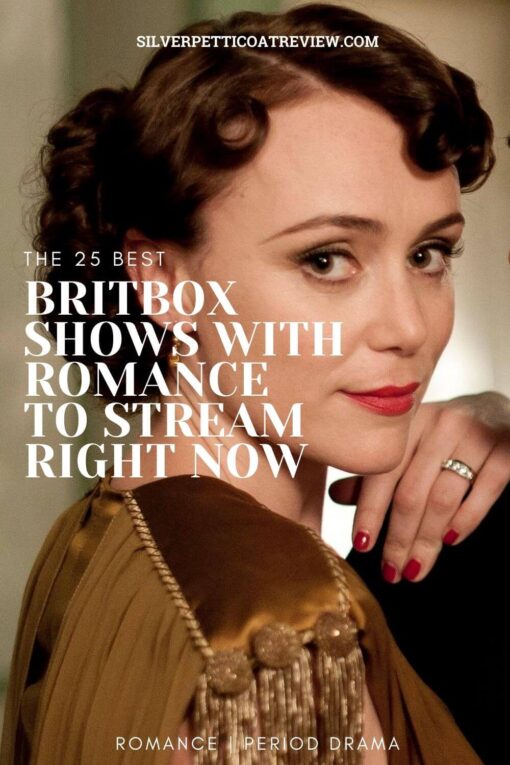 These are the best BritBox shows for Anglophiles in the mood for romance!

When it comes to deciding which BritBox shows to watch, it’s hard to know what to stream next. (Though who isn’t always in the mood for watching Colin First as Mr. Darcy?) If you’re like me, it probably depends on your mood.

On BritBox, you’ll find mysteries, soaps, classics, sitcoms, drama, and their popular romantic period drama series and miniseries. From Pride and Prejudice to Jane Eyre, no one does the romantic series quite like the British with their smoldering stares and swoon-worthy dialogue.

So, what currently are the best BritBox shows to watch when you’re in the mood for romance?

The list below of BritBox shows include different genres to match every mood. From a contemporary spy series with great TV couples to romantic dramas to classic rom-com sitcoms.

Now, if you’re into super explicit romance stories, this probably isn’t the list for you. However, if you’re in the mood for some sweet, classic romances or some engaging dramas and comedies, check out this list of the 25 best BritBox shows to stream with love stories right now! There’s something here for everyone.

BritBox Synopsis: Based on a true story by Stella Tillyard, a chronicle of the turbulent lives of the Lennox sisters, daughters of the Duke of Richmond, in the eighteenth century.

Why You Should Watch: This British miniseries has a fantastic cast telling fascinating stories about real women from history. It’s an intriguing series you won’t want to miss!

BritBox Synopsis: Love gets a second chance – 38 years on – in this warm and witty comedy. Sweethearts Jean (Judi Dench) and Lionel lost touch after a whirlwind romance in the early 1950s but are reunited when Lionel returns to England to write his memoirs.

Why You Should Watch: Judi Dench stars in this sweet romance series full of nostalgia.

BritBox Synopsis: A young English priest discovers that life in a rural Irish village isn’t what he expected. For starters, he must contend with driving and local gossip-mongers.

Why You Should Watch: If you enjoy quirky small-town shows and slow-building romance, this is must-watch television! There’s an intriguing forbidden romance between a priest and a pub owner.

BritBox Synopsis: Gillian Anderson and Denis Lawson head a star-studded cast as acclaimed writer Andrew Davies turns his talents to one of Charles Dickens’ most brilliant novels – arguably the greatest ever depiction of Victorian London. At its heart is the story of the icily beautiful Lady Dedlock, who nurses a dark secret, and merciless lawyer Tulkinghorn, who seeks to uncover it.

Why You Should Watch: This romantic period drama miniseries is brilliant and was even nominated for 2 Golden Globes.

BritBox Synopsis: Evelyn Waugh’s drama about a generation of wealthy, careless, independent men and women clinging to a way of life eroded by one war and soon to be swept away by another. Starring Anthony Andrews and Jeremy Irons.

Why You Should Watch: For the excellent script and acting. The miniseries deservedly won numerous awards.

BritBox Synopsis: The incomparable Judi Dench stars in this story of Cranford, a small-town hub of intrigue where everyone talks – and everyone is talked about. The town is on the cusp of change, and the lives of its residents push ever forward.

Why You Should Watch:Cranford is simply delightful! With an all-star cast including Judi Dench, Eileen Watkins, Michael Gambon, Tom Hiddleston (season 2), and more, this is a romantic series worth your time.

BritBox Synopsis: Dramatization of the classic Charles Dickens novel. A young man attempts to overcome adversity after he is sent away by his stepfather.

Why You Should Watch: This is the best adaptation of the famous novel to date! Plus, it includes a fabulous cast such as Maggie Smith, Daniel Radcliffe, Ian McKellen, Imelda Staunton, and Bob Hoskins.

BritBox Synopsis: Set within the fictional realms of Charles Dickens’ novels, Dickensian brings together some of literature’s most iconic characters, including Scrooge, Fagin, and Miss Havisham, as their lives intertwine in 19th century London. With a wealth of backstories sourced from the novels, Dickensian delivers fast-paced storylines with surprising twists and turns.

Why You Should Watch: If you enjoy literary prequels or retellings, you’ll want to watch this underrated series. It’s like Once Upon a Time but with Charles Dickens’ characters and much darker.

BritBox Synopsis: Set in 1959, after decades away from his native Australia, Blake returns to his rural hometown to run his late father’s medical practice. But his inquisitive nature draws him into the task of solving murders that perplex local law enforcement.

Why You Should Watch: If you enjoy romantic mystery shows, this Australian series should work just fine! It’s wonderfully acted with a romance everyone will root for.

BritBox Synopsis: The sweep and scale of the Russian Revolution acts as the backdrop for the intense and ultimately heart-breaking love story of Doctor Yury Zhivago, the physician and poet who wrestles with the anguish of being torn between the love of two women, Tonya and Lara.

Why You Should Watch: While it’s not as good as the classic ’65 adaptation, it is well done. I also think Keira Knightley was a little too young for the role, but it’s still a good miniseries with an excellent cast, including Sam Neill.

Why You Should Watch: Arguably the greatest adaptation of Jane Austen’s beloved novel, the miniseries length gives ample time to explore the characters. Plus, Romola Garai and Jonny Lee Miller are perfect onscreen together.

Why You Should Watch: I have not seen this series, but if you enjoy British comedies, I’ve heard it’s a good one.

BritBox Synopsis: Violence and Victorian gentility meet in one of Dickens’ greatest creations, and this adaptation is appropriately dark, sometimes savagely comic, and wholly unsentimental.

Why You Should Watch: Ioan Gruffudd is the king of starring in good period dramas! The ’99 miniseries is my favorite version of the novel, mostly because I love the actors.

Why You Should Watch: If you’ve never seen an adaptation of Jane Eyre, the 2006 miniseries is the one to watch! It has a fantastic script, and the romantic chemistry between Ruth Wilson and Toby Stephens sizzles onscreen. It’s definitely one of the best Britbox shows to watch!

BritBox Synopsis: Rich, funny and emotional, the first season follows the relationship of two contrasting communities. Seen through the eyes of young Laura, their inhabitants endure many upheavals and struggles as the inexorable change comes; their stories by turns poignant, spirited and uplifting.

Why You Should Watch: If you enjoy heartwarming romantic period dramas, trust me, this series will become your one weakness! It’s an addictive and outstanding drama series.

BritBox Synopsis: Bored bank worker Amanda Price literally becomes lost in her favourite Austen book, after she finds a portal in her bathroom and swaps places with its heroine Elizabeth Bennet.

Why You Should Watch: If you’re into any fandom, or have ever dreamed of marrying your own Mr. Darcy, you won’t want to miss this hilarious and fun take on Pride and Prejudice.

BritBox Synopsis: Welcome to the thrilling underworld of MI-5, Britain’s clandestine security service and the elite spy team who work around the clock to safeguard the nation against organized crimes, terrorist activities, embassy sieges and so much more.

BritBox Synopsis: Five-part drama series based on the detective novel by Wilkie Collins in which a man must find a stolen diamond to win the heart of the love of his life.

Why You Should Watch: The Moonstoneis considered the first detective novel! This lovely adaptation of the book is a fun and entertaining watch.

BritBox Synopsis: Season One is the story of East London lass Molly Dawes’ emotional rite-of-passage as a young medic and woman in the British Army’s final deployment of troops to Afghanistan.

Why You Should Watch: I have not seen this show, but I’ve heard good things about the romance. So, if you enjoy more contemporary shows, check out this popular series.

BritBox Synopsis: Colin Firth in his wet shirt was the television moment of the 90s. This irresistible, sophisticated and sexy saga launched Firth and Jennifer Ehle to international fame and inspired a modern Jane Austen renaissance.

Why You Should Watch: It’s the ultimate romantic period drama! If you haven’t seen it yet, watch it as soon as possible. The Jane Austen adaptation is a modern masterpiece.

BritBox Synopsis: Heroine Sally Lockhart (Billie Piper) is recently orphaned and on the quest for the truth. Matt Smith (Doctor Who) co-stars, in his first professional role.

Why You Should Watch: The romantic mystery series (only two episodes) is must-watch television for Doctor Who fans. But it also stars JJ Field as the love interest for Billie Piper. And yeah, he just excels at romance. Hayley Atwell also stars.

Why You Should Watch: Watch for the fantastic cast! I haven’t seen this one yet, but it’s now at the top of my list. If you’re in the mood for a more serious drama, this one sounds like a good pick.

BritBox Synopsis: The true story of Howard Carter’s epic quest to discover the lost tomb of the Boy-King Tutankhamun, set against the sweeping backdrop of an Egypt caught in the violent spasms of World War One and Revolution.

Why You Should Watch: This one’s for people in the mood for escapist entertainment.

BritBox Synopsis (original): Popular period drama series. 30 years in the life of the Bellamy family and their below stairs servants between the years 1903 and 1930.

BritBox Synopsis (2010 continuation): Jean Marsh returns as maid Rose Buck, six years after the classic Seventies period drama ended. It is 1936, and 165 Eaton Place has a new family moving in.

Why You Should Watch: It was one of the most popular period drama series to ever air in Britain!

BritBox Synopsis: Dawn French stars in this beloved BAFTA-winning sitcom as the Vicar of the sleepy rural parish of Dibley. Co-written and created by Richard Curtis (Four Weddings and a Funeral, Notting Hill, Love Actually).

Why You Should Watch:It’s one of the funniest shows ever to be on television, and there is a lot of romance. Unfortunately, the most romantic episodes (with Richard Armitage) aren’t included on the streaming channel yet. But maybe that will change in the future!

What do you think are the best BritBox shows with romance to watch? What’s your favorite on this list? Let me know in the comments.