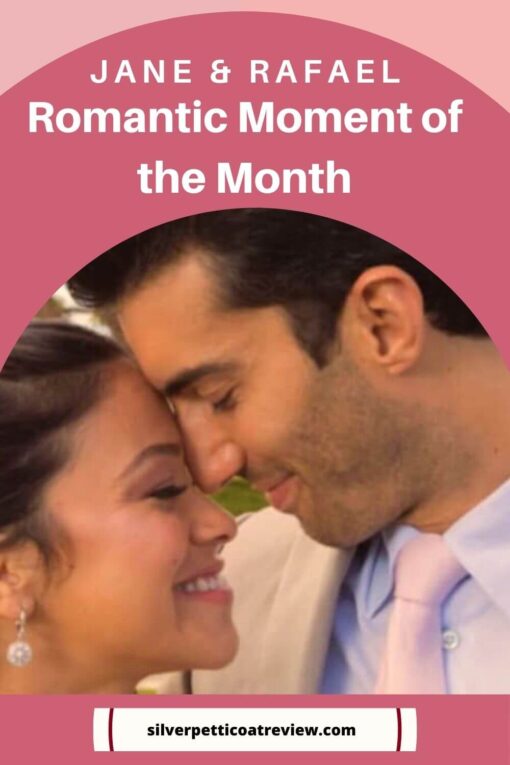 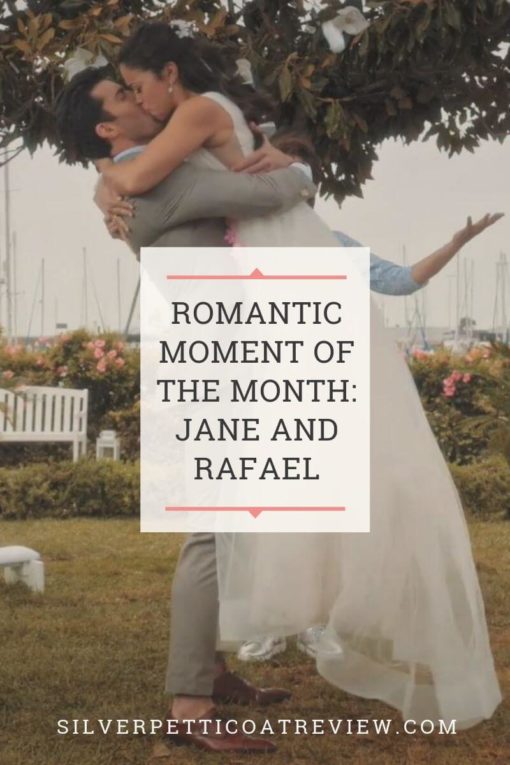 The romantic moment of the month belongs to Jane the Virgin‘s Jane and Rafael.

After five brilliant seasons and 100 “chapters,” it was finally time to find out if Jane and Rafael got their happy ending or if a dark twist was still in store for these two romantics. Thankfully, when the Jane the Virgin series finale aired this week, the romantic dramedy series ended true to telenovela style…

…with a wedding and a glorious happily-ever-after!

Romantic Moment of the Month

While there were a few standout romantic moments this month, it’s hard to top the blatantly optimistic and romantic ending of Jane the Virgin. The Logan and Veronica wedding, for example, was beautiful and long overdue, but the shocking ending ruined the romance of it.

So, Jane the Virgin shines as an example of how to tell a unique story without subverting the audience’s expectations. Giving unhappily ever afters may be common from cynical writers in today’s jaded world, but with the audience, the HEA (happily ever after) is as popular as ever. And it’s for that reason we’re picking the Jane (Gina Rodriguez) and Rafael (Justin Baldoni) wedding for the romantic moment of the month.

With the defeat of the big-bad, Rose, and Michael, given his happy ending in Montana in the penultimate episode, the finale became about giving the rest of the good guys their deserved happy endings rather than adding in new baddies or unexpected cliffhangers.

But before Rafael and Jane can have their wedding and HEA, a few “fun” obstacles get in their way.

When Rafael makes a grand romantic gesture by bringing her revised novel to the publisher before it goes out for advanced readings, he gets arrested for speeding out of the publisher’s parking lot. So, Jane needs to pick up Rafael and get them both to their wedding on time! But she doesn’t have a car.

To get there, Jane bargains with a local bus driver to allow her to use the bus for the day. After he agrees (with $5000 in payment), Jane and Rafael make their way to their wedding.

The Romantic Moment: Jane and Rafael

Jane walks down the aisle with tears in her eyes, making her way to a smiling (and crying) Rafael. It’s a touching and genuine moment.

Then, with the ceremony in full swing, Alba shares a few powerful words, setting the tone for this dreamy, idyllic wedding:

“Isabel Allende once said, ‘You are the storyteller of your own life.’ And Jane and Rafael, you have taught me how very true that is. Because your journey has had more twists and turns than a telenovela. But through it all, you fought for each other. And made sure that you ended up here, now–exactly where you are destined to be.”

After Alba’s powerful speech, she invites Jane’s parents to participate in a “special Mexican tradition.” Jane and Rafael kneel on small white stools and have a “lazo” placed around both of them to symbolize everlasting unity.

What’s great about this moment is that not only has the writer, Jennie Snyder Urman, given us time to enjoy the “full” wedding experience of Jane and Rafael (something rare in television), she has also added authentic Mexican wedding traditions some viewers may not be familiar with. And that’s something special and empowering to watch.

Then it comes time for Jane and Rafael to exchange their vows of holy matrimony. Only they’re both too emotional to do it. So, they read each other’s vows, keeping this moment intimate and private with each other; the happy tears freely flowing.

Next, Petra finally brings them the rings to finish out the ceremony. Rafael and Jane then exchange rings as a symbol of “love and fidelity” and even sneak in two quick kisses. And after years of obstacles, Alba shares the magical words:

“I now pronounce you husband and wife. You may resume kissing the bride.”

The camera zooms in on a gorgeous romantic shot of Rafael lifting Jane in the air in a swoon-worthy kiss. A perfect homage to telenovelas and romance novels.

But their story doesn’t end with a wedding kiss.

The family (and close friends) then join in for traditional wedding photos with love in the air for everyone.

Then to top off the magical end of the Jane the Virgin journey, Jane and Rafael sit against a tree (another shot alluding to romance novels), taking in the beauty of their happy day.

He asks Jane how she ended her “book” about their lives. And she reveals that their story becomes a telenovela. Jane looks into the camera and at the audience, winking in a meta moment. It’s a thank you for watching, a triumph of the HEA, and ultimately a celebration of the love story of Jane and Rafael.

No doubt about it. This show will be missed.

Were you happy with the Jane the Virgin finale? Did you love the Jane and Rafael ending, or were you still holding out for a Jane and Michael reunion? Let me know in the comments!

ROMANTIC MOMENT OF THE MONTH: MATTHEW AND DIANA IN ‘A DISCOVERY OF WITCHES’