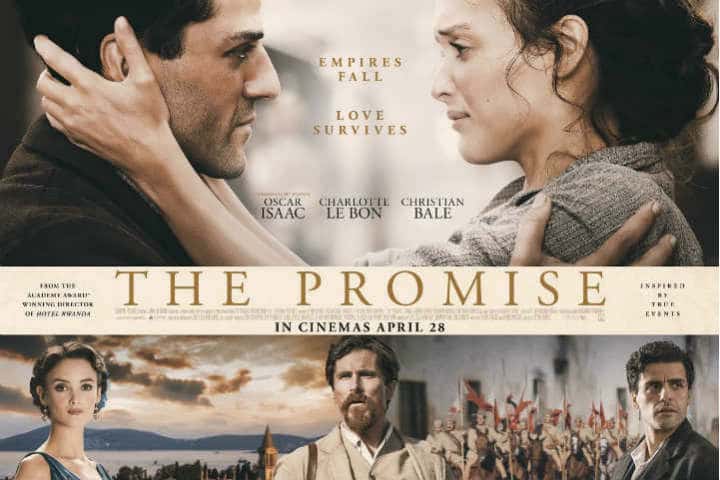 The Promise tackles a culture and history rarely portrayed in American film, which, of course, became a huge draw for me. The caliber of the director and actors was also a huge draw. However, I was less excited about writing the review after reading many other professional reviews which were not exactly filled with glowing remarks. Although these reviews didn’t squelch my interest in seeing the film, they did leave me a bit intimidated in sharing my own opinions.

The Promise is set in the last days of the Ottoman Empire, now Turkey, during the early years of World War I. Young Mikael Boghosian comes from a family of apothecaries, but his real dream is to leave his mountain village to attend medical school in Constantinople so that he can return to doctor his people. This dream has always been out of reach. That is until he betroths himself to a local girl in order to gain her dowry for the school fees. He plans to complete a three-year medical degree in two, and then return home to marry her. He believes he will learn to love her eventually.

In Constantinople, Mikael boards with a wealthy relative. Then he meets Ana, a fellow Armenian raised in Paris who has returned to her home country with her American reporter boyfriend Chris Myers. Although an immediate attraction between Mikael and Ana stirs, they hesitate to pursue it since they are both committed to other people. Mikael also becomes friends with Emre, a fellow medical student who is the son of a high-ranking Turkish official. 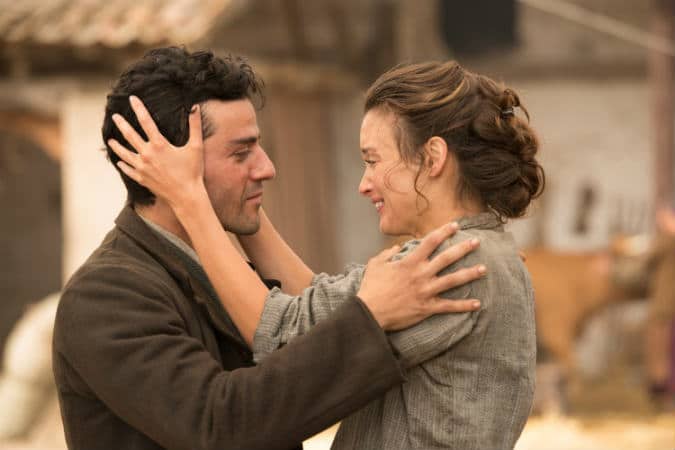 When the Ottoman Empire enters the war allied with the Central Powers of Germany and Austria-Hungary, it also begins a brutal campaign against its’ minority citizens in the belief that these groups, including the Armenians, are allied with the enemy against their own nation.

It is not long before the shadows of war and the prejudices of the Turkish people towards minority citizens begins to show its’ ugly face and to throw the relationships and lives of Mikael, Ana, and Chris into total upheaval. Mikael’s friendship with the light-hearted and loyal Emre gets put to the test because of their cultural and religious differences. All four of them must decide where their personal and national loyalties lie and choose how to respond to the destruction they witness.

I’m not going to lie. When I saw the previews for The Promise and realized that Christian Bale, Charlotte Le Bon, and Oscar Isaac were co-starring in this film I knew I had to see it. Bale and Isaac are both top-notch actors who bring intensity and nuance to every role they play. And I fell in love with Le Bon, a delicate Audrey Hepburnesque French actress, after seeing her in The Hundred Foot Journey. 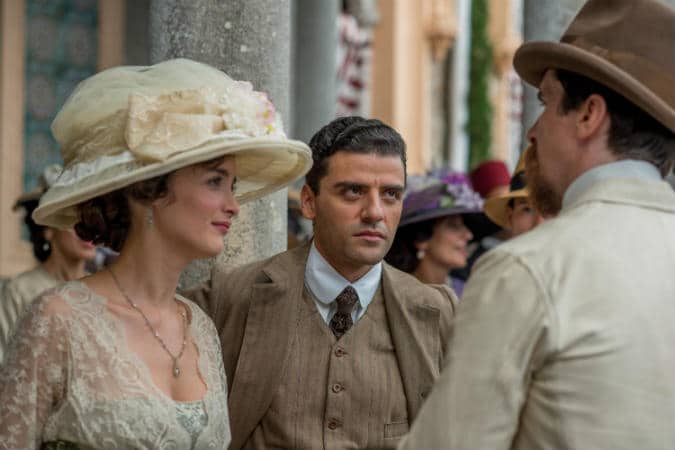 These three have the challenging job of playing a love triangle in the midst of war and horror. Many of the other reviews I read for The Promise complained about the love triangle, saying that it slowed the film down and that it was a distraction from the more important topic of the systematic destruction of the Armenian people who lived in the Ottoman Empire at this time.

I disagree. Perhaps in the hands of less capable actors, this could be true. At times, the romance story did move slowly but consider that in times of war and chaos, the development of relationships takes a back seat to the priority of survival. Bale’s portrayal of journalist Chris Myers shows his commitment to capturing and reporting the truth of the events unfolding around him, even though the necessity of doing so leaves the woman he loves alone and vulnerable. Oscar Isaac’s acting interpretation shows a man torn between honor and his heart. He falls in love with the delicate Ana but refuses to break his promise to marry. 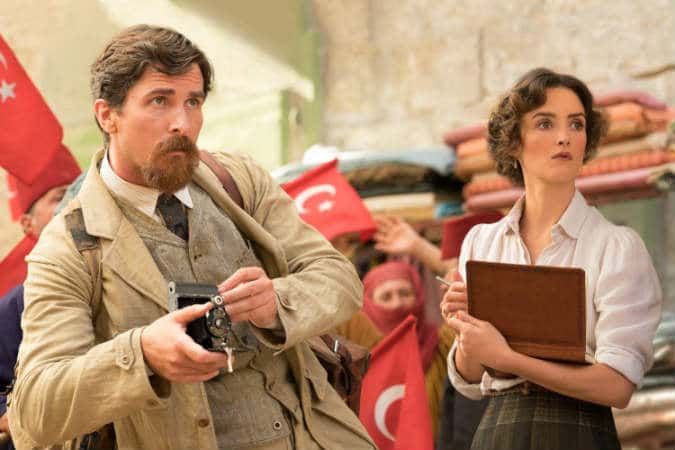 Charlotte Le Bon somehow manages to make Ana a sympathetic character despite being in love with and torn between two different men. In other hands, Ana’s character may have seemed sordid and of questionable integrity, but Le Bon gives Ana innocence and heart. This Ana is trying to determine her loyalties between the man who rescued her after her father’s death left her an orphan and honored her wish to return to her homeland and the man whose culture matches her own giving them so much in common.

One of the things I appreciated is that even though this is a love triangle, it doesn’t devolve into melodramatic territory. Chris is patient and understanding with Ana’s attraction to another man which leaves her confused. Mikael sacrifices his own desires to keep his promise to marry. As the film and time move on, the three are brought back together again. And, despite hints of jealousy, both Chris and Mikael come to respect and trust each other. They also work together to protect Ana. 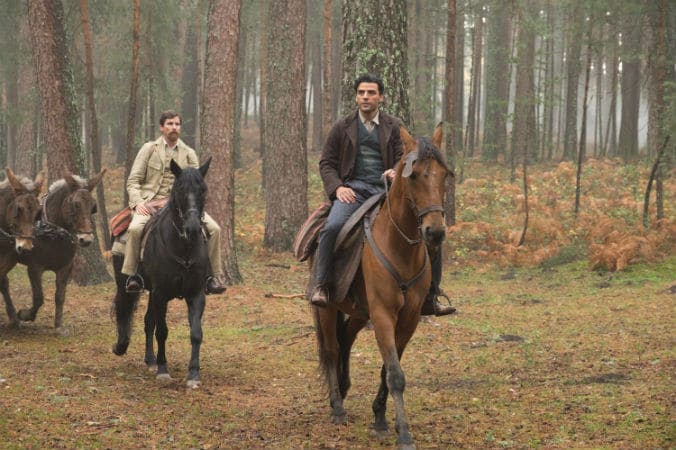 The other aspect of this film which motivated my desire to see it is that it covers the systematic elimination of the Armenian people by the Ottoman Empire. This is a historical event which is not nearly as well known as it should be. Especially considering that there are so many similarities between this and the later annihilation of the Jews and other dissidents by Hitler in World War II. Sadly, to this date, Turkey still refuses to acknowledge the destruction of the Armenians as genocide.

Director Terry George has addressed this topic before in the 2004 film Hotel Rwanda. By most accounts, his film version of the Armenian genocide portrays the events with historical accuracy. Instead of focusing on one particular event or historical figure, George gives a broad overview of the events that occurred. The alliance with German soldiers, the shifting loyalties between former friends now torn apart due to ethnicity and religion, the round-up and deportation of entire villages, the forced starvation marches into the desert, the conscription and outright disappearances of Armenian men into labor camps and graves, and the confiscation of businesses, property and wealth. 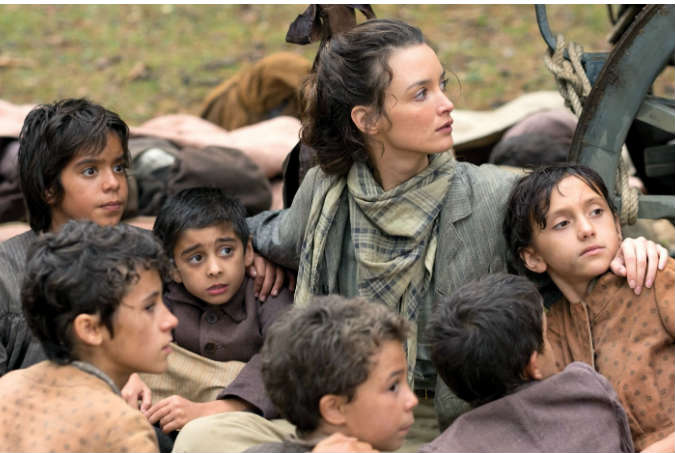 As I watched The Promise I saw so many parallels between what happened to the Armenians and what happened to the European Jews and others who Hitler hated. There were the death march scenes, the labor camps, the roundups, deportations, and killings without mercy. The lack of compassion and humanity by those in charge, the people stuffed into cattle cars, violence without mercy. Yet, it also shows scenes of kindness and bravery. Turks who risked their lives for the sake of Armenians, missionaries working to rescue and save orphaned children, etc. Not to mention, the bravery and resilience of a hunted people.

Despite the complaints of other reviewers about the love triangle, I felt that this actually served to humanize and personalize the larger on-going events of the film. We see how those events affect each of the characters and how their response reflects the bravery and the dogged persistence to keep going, to continually risk their lives for the greater good. It shows how the best of humanity responds to the worst. As Ana says in the film, “Our revenge will be to survive.”

One of the nice surprises of this grim yet hopeful film is the appearances of other well-known actors in smaller roles. Film fans like me will be pleased to see actors like Tom Hollander, Rade Serbedzija, Shohreh Aghdashloo, Jean Reno and James Cromwell appear unexpectedly. Cromwell portrays real historical figure American Ambassador Morgenthau whose meeting with the Turkish Interior Minister Talaat Pasha is an actual historical event. Talaat was instrumental in the planning and implementation of the destruction of the Armenian people. Morgenthau was Jewish and their conversation in the film eerily alludes to the future genocide of the Jewish population.

The Promise is an interesting look at an often overlooked historic event. Though it can be hard to watch some of the tragedy unfold, I would recommend it to those who are interested in learning more about the Armenian genocide or who just appreciate historical dramas.

Where to Watch: The Promise is currently playing in theaters.

Content Note: This film is rated PG-13 and includes war violence and some disturbing images. There is some sexuality, but no nudity or graphic sex scenes.

Will you be watching The Promise? Sound off below…

Our romance-themed entertainment site is on a mission to help you find the best period dramas, romance movies, TV shows, and books. Other topics include Jane Austen, Classic Hollywood, TV Couples, Fairy Tales, Romantic Living, Romanticism, and more. We’re damsels not in distress fighting for the all-new optimistic Romantic Revolution. Join us and subscribe. For more information, see our About, Old-Fashioned Romance 101, Modern Romanticism 101, and Romantic Living 101.
Pin this article to read later! And make sure to follow us on Pinterest.
By Brittaney B. on May 10th, 2017