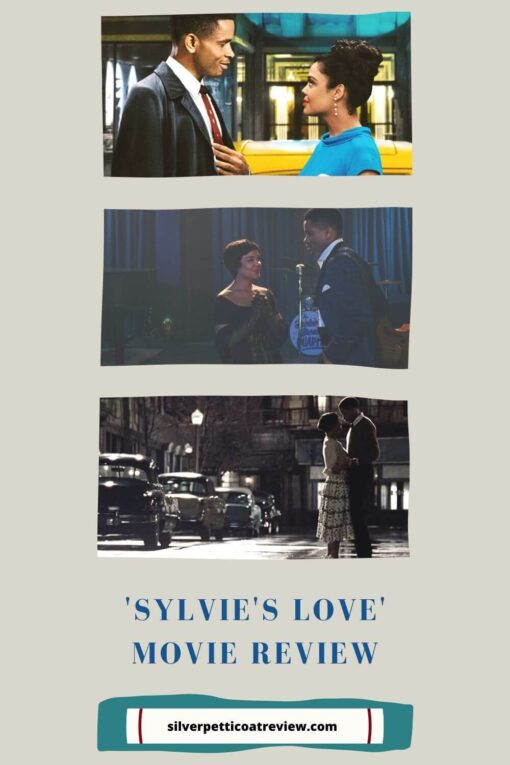 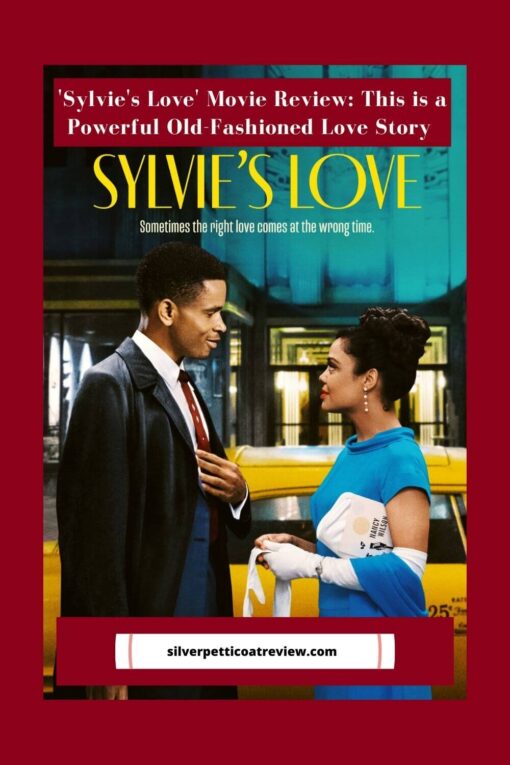 The look, sound, style – everything about Sylvie’s Love reminds you of the Classic Hollywood Romances of the ’50s, ’60s, and even ’70s. And that’s a good thing.

With Sylvie’s Love, the classic romantic melodrama is back but with more diversity, and I’m all for it.

Sylvie’s Love begins in New York in the summer of 1957 when Sylvie and Robert cross paths. It’s all a bit like The Notebook with Sylvie engaged to another man but daydreaming of something else.

She works in her father’s record store while dreaming of working in television (something relatively uncommon for a black woman at that time). Meanwhile, Robert is a budding saxophonist in a jazz quartet on the brink of greatness and success.

To earn extra money (and meet Sylvie), Robert gets a part-time job at the record store. Their friendship soon develops into love. But as their summer comes to an end, life brings them down two separate paths.

Years later, the two once again cross paths, and the spark is still there. But can they find a way to come together, or is it too late?

From the start, Thompson and Asomugha have sizzling on-screen chemistry and bring performances that stay with you. The film is categorized as a romance and stays blatantly and unashamedly true to that.

If you’re looking for a cynical exploration of love, this is not the movie for you. From deep conversations in the record store to slow dancing in the streets with a perfectly lit NYC background, Sylvie’s Love is old-fashioned Hollywood romance at its best.

One aspect of the film that stood out to me was the characterization of Sylvie and Robert. Sylvie is a fully developed female character with ups and downs, successes and failures, triumphs and disappointments. She makes mistakes but never leaves the world of relatability or believability.

The same goes for Robert. Seeing his highs and lows in the jazz world struggling to survive with Motown’s rise is fascinating to watch. It’s not something I thought about before, so I was intrigued to see how the changing years affected musicians in the jazz music scene.

Ultimately, I rooted for the two to follow their dreams and find a way to come together. I am a sucker for a happy ending, after all.

RELATED: Review: ‘Bridgerton’ is a Period Piece That Paves the Way for Future Romance Adaptations

Some of the other cast members include Regé-Jean Page (Bridgerton), Eva Longoria, Tone Bell, Lance Reddick (Fringe), and Aja Naomi King. Everyone plays their parts well in what is a brilliant and beautiful film.

Sylvie’s Love is the romance movie we all need right now. By centering the love story on characters Hollywood ignored in the past, it makes the genre feel fresh and contemporary.

It’s sweet but not mawkish with authenticity in the script, direction, a magnificent soundtrack, and believable chemistry between the actors. The lighting, production design, and cinematography are also excellent, giving the film the atmospheric feel of a romantic NYC that is no more.

Overall, it is one of the best movies of 2020, and more people should check it out.

Content Note: PG-13. While the movie pays homage to the classic romance film, there is some sensuality with a couple of brief love scenes that are not overly explicit. The film includes an extramarital affair and adult themes.

Have you seen Sylvie’s Love? What do you think of this romance movie? Do you agree with my review? Sound off in the comments below.