THE FILM: The Last of the Mohicans

THE MOMENT: A Plea to Survive

The Last of the Mohicans is a sweeping saga of love and loss set against the backdrop of the French and Indian war. The film’s success was due largely to its focus on characterization. Each character, no matter how minor, has a purpose, imbuing the film with depth and complex layers. The landscape is as essential to the movie as the characters. Along with the incredible cinematography and an achingly beautiful original score, The Last of the Mohicans is a heartbreaking romantic film. If you have not seen it, proceed with caution. Spoilers below!

After rescuing Cora and her sister, Alice, from a Huron war party, Hawkeye, his father Chingachgook, and his brother Uncas agree to escort the survivors to Fort William Henry. Hawkeye, also known as Nathaniel, is the adopted white son of Chingachgook, one of the last of the Mohican tribe. They are hunters and trappers, living peacefully alongside British colonists. Cora Munro is the pampered daughter of a British Colonel, recently arrived at the frontier. Despite their differences, or perhaps because of them, Hawkeye and Cora are drawn to each other.

Related Post – Vintage Review: The Last of the Mohicans: A Moving Historical Drama

Their pace to the fort is relentless but Cora remains steady, encouraging her more fragile sister along the way.  As the end of their journey draws nearer, Cora opens her mind and heart and finds beauty in Hawkeye’s unfamiliar ways. In turn, Hawkeye looks past her delicate façade and discovers her spirited nature.

THE LEAD IN – A Race for Survival

Upon arrival to Fort William Henry, the group finds it’s under attack by the French. Ultimately, the British surrender and march back to Albany. However, there is another Huron war party hidden in the forest, ready to attack. A war cry echoes in the quiet and Hawkeye’s sense go on full alert. In the blink of an eye, the war party races out from the forest and a battle ensues. It is brutal and in particuler, for the sole purpose of exacting revenge on Cora’s father. Part of that revenge is the death of Cora and Alice.

Hawkeye frantically searches the battlefield for Cora. From afar, he sees her come under attack and he shouts her name in anguish. Their eyes meet across the distance as he races towards her. Hawkeye cries out her name again, desperate to get to her. He is without mercy as he fights his way to her, rescuing her just in time. Hawkeye pulls Cora into his arms, his relief plainly etched across his features.

Escaping by river, the small group of survivors finds brief refuge in hidden caves behind the waterfalls. However, before long the Huron find them. Chingachgook knows the odds and in Mohican, insists they must go. Hawkeye argues. He does not want to leave Cora, but he knows it’s her best hope for survival. Cora watches this exchange and instinctively she knows what they are saying. She steps forward. Her voice shakes yet she is form. Cora insists Hawkeye leave. She insists he save himself. She knows that without her slowing him down, he will survive. Time is running out but Hawkeye takes the time to make sure she understands. This isn’t cowardice but a last effort to ensure she and her sister live.

ROMANTIC MOMENT – A Waterfall of Desperation

Hawkeye stares intently at Cora as he explains the situation. His eyes are darkly intense as they bore into hers. She must understand. They will have no chance if he and his family stay. None. This isn’t about his life but about hers. He will not risk her. If he goes, there’s a chance and he must give Cora that chance. Nonetheless, Hawkeye can’t hide his despair. Nor can he hide his fear at what may befall Cora. Hawkeye is fierce in his plea. His words a vow, a promise to her and one he’ll never break. 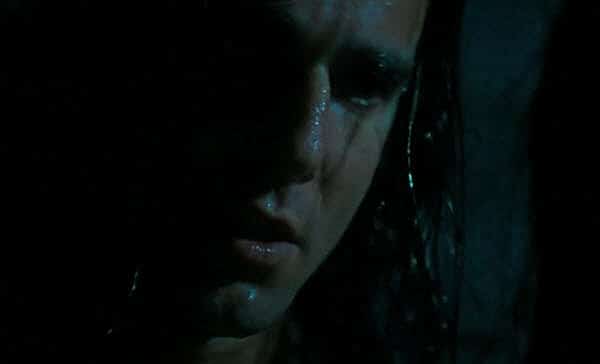 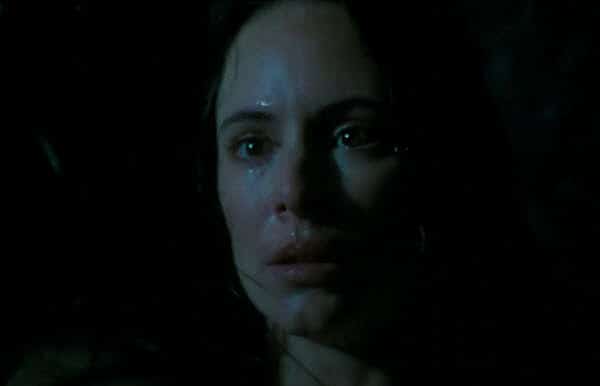 Cora is surprised at the power of his words. The force of them take residence in her heart and become her focus. There is fear in her expression. Dread. Still, Cora gives Hawkeye an almost imperceptible nod. For him, she will be strong. Just then, the flickering lights of the Huron party grow closer. They are out of time. Hawkeye turns away to grab his rifle. Turning back, he goes very still as he stares at Cora, memorizing every feature. He hides nothing from her and his passion is there for her to see. His words still echo between them. He will find her. He will come for her. 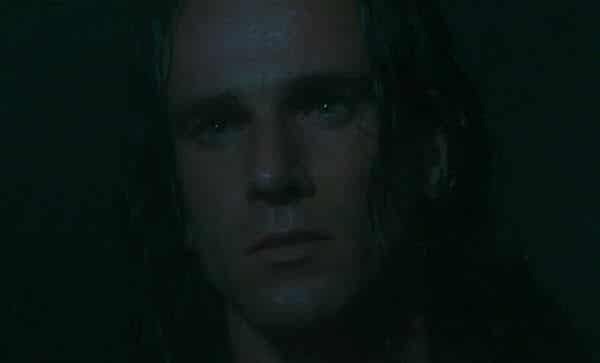 Cora meets his gaze calmly. She too hides nothing from him. Her determination, faith, and love are plainly visible. 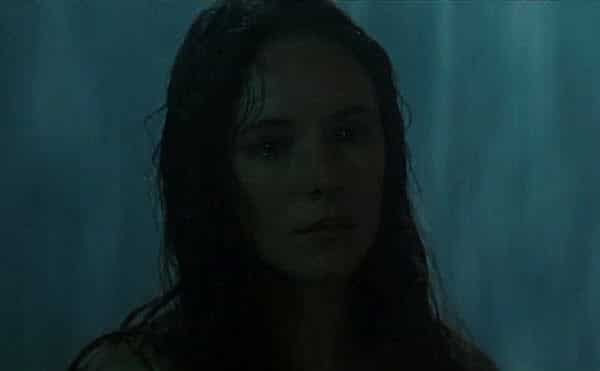 The pounding of the waterfall echoes between them, becoming louder as the inevitable draws near. There is no need for more words. With a tortured expression, Hawkeye runs toward Cora and then leaps past her, out into the void.

Related Post – Wartime Romances in Film: A Look Back

I was unexpectedly moved by this moment. The tension between Hawkeye and Cora was so thick, it was palpable. The despair was just as deep. Neither knew if the other would survive. Yet, there was so much faith it was impossible not to believe. 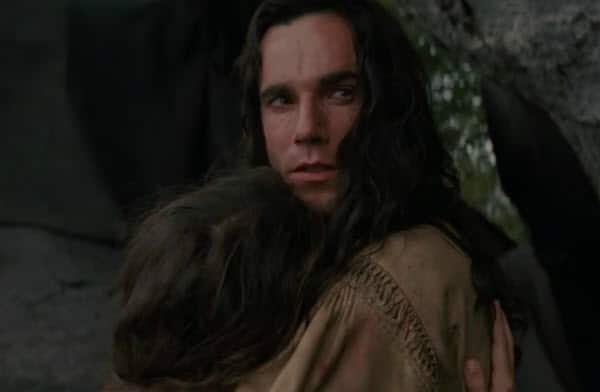 The Last of the Mohicans is not a happy film, it’s ending tragic. However, the love story between Hawkeye and Cora lifts it, adding beauty amidst the sorrow. When Hawkeye does find Cora, grief marks their reunion. Still, they are able to find comfort in each other as they move on.

Tell me, did you find this scene as romantic as I did? What other scenes in The Last of the Mohicans spoke to you? Share your favorite with me in the comments below!

Our romance-themed entertainment site is on a mission to help you find the best period dramas, romance movies, TV shows, and books. Other topics include Jane Austen, Classic Hollywood, TV Couples, Fairy Tales, Romantic Living, Romanticism, and more. We’re damsels not in distress fighting for the all-new optimistic Romantic Revolution. Join us and subscribe. For more information, see our About, Old-Fashioned Romance 101, Modern Romanticism 101, and Romantic Living 101.
Pin this article to read later! And make sure to follow us on Pinterest.
By Catherine on May 14th, 2017

8 thoughts on “Romantic Moment of the Week – The Last of the Mohicans: Hawkeye and Cora”