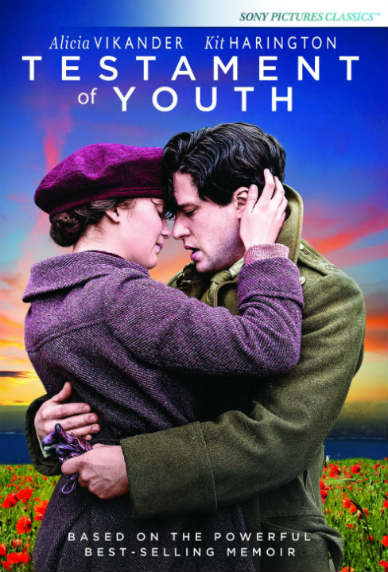 I can be “careful” when it comes to my choices in cinema. Because I’m of the opinion that films should uplift more than disappoint, I tend to fall into the happy ending honey trap. Anything less and I tend to shy away. But in the past 2-3 years I feel like I’ve “grown up,” if you will, in my choice of films. It’s this that has led me to watch more productions like Testament of Youth. Based on the memoirs of Vera Brittain, this film was… beautiful. I feel like more needs to be said than merely that because as much as I did overall feel this was an elegant drama above the fray, I did have some reservations.

The story follows Vera Brittain, played by the rising star Alicia Vikander. Vera lives a comfortable life where her greatest fear and challenge is getting her father to give permission for her to attend Oxford. Instead, her parents (Dominic West, Emily Watson) anticipate their daughter will marry well like a normal and proper lady. Not about to let them beat her, she obtains her father’s permission to take the entrance exam and then, WWI breaks out.

This plunges not just her country into war, but her family. She remains behind as her little brother, Edward (Taron Egerton) joins up and all of his pals, including the sweet Victor (Colin Morgan, known from BBC’s Merlin) and Roland (Kit Harington), the one man who changes Vera’s determination to never marry. 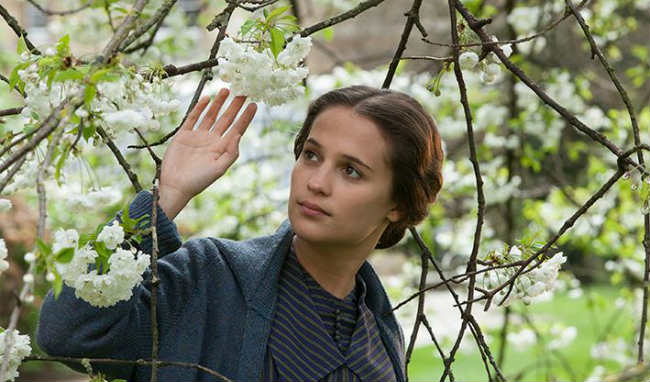 Everything about this film is stunning. From its stark soundless opening frame (transitioning into a bustling hubbub of misery for its heroine) to the unique approach of an ending, this has the feel of an artistic film done right. Based on the memoir of its heroine, Testament of Youth is still in print today and is considered one of the foremost WWI memoirs to date (this according to the printed facts you’ll see at the end of the DVD). I am ashamed to admit until watching Testament of Youth, I wasn’t familiar with this woman’s story or her life. This film felt like something of an education. Though I know nothing of Vera’s life, as it drew to a close, I really felt like I had witnessed someone’s true-to-life story.

Though plenty of things can be praised about Testament of Youth, what raises it up as being most impressive was the depth of the acting. It was fun seeing Alicia Vikander (who had a kind of “breakout” in the summer flick The Man from U.N.C.L.E.) lead the cast here. She affected the role of Vera with a unique understanding. It played like she really knew what she needed to get out of this performance in order to stir a weighty emotional reaction in the viewer. Without displaying much emotion (she makes her character rather stony-faced for the majority), her performance is heartbreaking. Explaining it any more thoroughly than this is impossible. The supporting cast is equally brilliant, helping to push the film to new heights and emotions. I hadn’t seen Kit Harington in anything, but he led the men well and I loved seeing Colin Morgan able to work in something more serious. 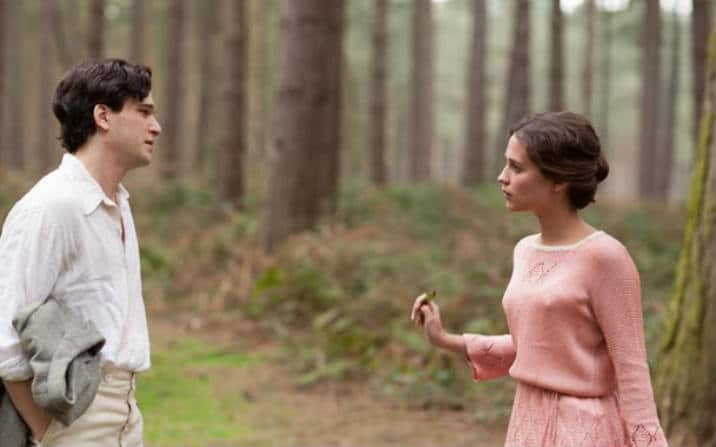 This is definitely a haunting drama that even wanders into a more “sensual” side of the romantic entanglement (lots of elegant and interesting up close film work) without crossing a line. Vera’s voiceovers, and the stark ways the war and the memories flood her are used really brilliantly. However, there is a bit of a pacing issue as regards to the romance. We’re asked to believe Vera falls in love with barely a civil word spoke between her and Roland. But on the other hand, the relationship has a kind of unique quality to it; she’s intrigued by his intellectual pursuits and writing, which I think catered to her fancy of Romanticism (and her desire to be an Oxford student). Plus, Roland sees Vera as a woman unlike any he’s ever met. Given the fact that a Guardian article reveals Vera and Roland only had 17 days together with their letters making up the rest of their relationship, perhaps I can understand why everything about their whirlwind romance felt rushed. 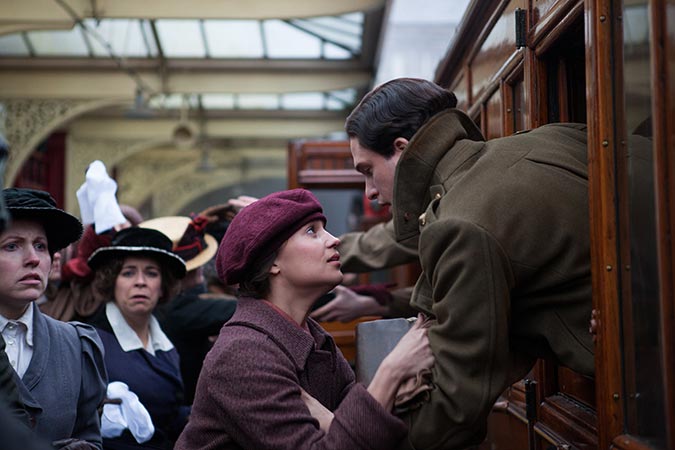 Those looking for a new period drama might be interested in this romantic biography. Its messages aren’t always ones I agree with, but I loved the film for its conviction in telling this woman’s true story. There are plenty of tears to be shed and for that reason alone, Testament of Youth is a powerful one. I’d have liked a slightly different ending just to capitalize on what Vera’s future ultimately was leading towards, but that’s wishful thinking. The settings, the costumes and the story, everything combined created a beautiful story of hardship, triumph and ultimately, the distant promise that happiness can be achieved.

Testament of Youth is available on Bluray/DVD and can be rented on Amazon Instant Video.

Have you seen Testament of Youth? Are you planning on checking it out? Share your opinions down below. I’d love to read them.

Our romance-themed entertainment site is on a mission to help you find the best period dramas, romance movies, TV shows, and books. Other topics include Jane Austen, Classic Hollywood, TV Couples, Fairy Tales, Romantic Living, Romanticism, and more. We’re damsels not in distress fighting for the all-new optimistic Romantic Revolution. Join us and subscribe. For more information, see our About, Old-Fashioned Romance 101, Modern Romanticism 101, and Romantic Living 101.
Pin this article to read later! And make sure to follow us on Pinterest.
By Rissi JC on November 20th, 2015