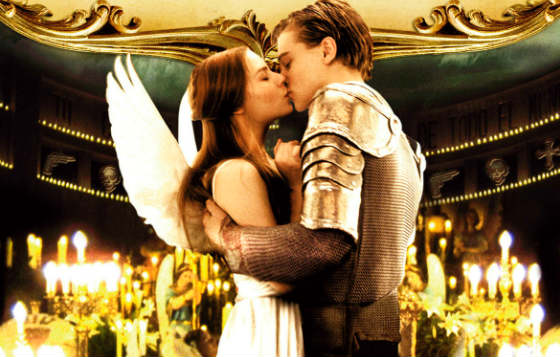 Continuing with The Red Curtain Trilogy we have Baz Luhrmann’s second film William Shakespeare’s Romeo + Juliet. I was excited to see this film as I have heard many things about it. I have heard everything from praise of its visual style from those who embraced what Luhrmann did with the story, to contempt from Shakespearean purists who thought it a travesty. Nevertheless, I was looking forward to seeing what this adaptation of the classic love story would offer.

The film closely follows Shakespeare’s story, leaving very little out and keeping the original Elizabethan dialogue intact. We all know the story, spoiler warning if you have not either read or watched some variation of this story. Two families are at war with each other. And. two star-crossed lovers from each side see each other and fall in love. The two families say it is forbidden and the lovers end up taking their lives because they cannot live without the other.

The story is about youthful love and prejudice. Luhrmann takes the classic story and brings it into modern times, updating it for a new generation. Instead of horses, characters drive cars. Instead of swords, guns are wielded bearing the name of their respective houses with the sound effect of a sword every time a firearm is drawn. And, instead of Verona, Italy events take place in a seaside city called Verona Beach which looks like a cross between Miami and Mexico City. Another interesting detail is having the Capulets and the Montagues as rival corporate families with the Capulets being Hispanic and the Montagues being Anglo. Those of the Montague house tend to wear Hawaiian shirts and have unnatural, brightly colored hair while the Capulets favor leather and metal-heeled boots.

So many scenes in this film stood out to me and were visually interesting and memorable. One of the most interesting scenes to compare in this film with the source material is the opening scene. In the play, members of the house of Montague and from the house of Capulet bicker in the village market about which family is superior. This leads to a fight that continues until Benvolio arrives to play peacekeeper and tells them to put away their swords. Tybalt shows up and continues the fight through taunts and insults.

In the film, Benvolio and the “Montague boys” are riding along the freeway in a bright yellow convertible. They pull up to a gas station and Benvolio goes inside. Soon afterward, Tybalt and the “Capulet boys” arrive on the scene. They exchange hate-filled glares and juvenile taunts until the Capulets are about to drive away when they see one of the Montague boys bite his thumb. In the fight that follows the characters battle with their guns and makes use of the surrounding cars and various buildings of the gas station. However, their reckless, prejudice induced behavior causes the gas station to go up in flames. This perfectly illustrates the severity of the feud between the two families.

I also really like the water imagery used throughout the film. It could be seen as a visual expression of Juliet’s promise that “My bounty is as boundless as the sea, My love as deep; the more I give to thee, The more I have, for both are infinite.” The scene of Romeo and Juliet first meeting also uses water imagery and is simply brilliant. They see each other through a fish tank, though water. Each refracted in the others’ eyes, made larger, deeper and more beautiful in their young eyes. It is the perfect visual metaphor for the depth and naivety of first love.

There is one thing I did not like. The two main leads, Leonardo DiCaprio and Claire Danes seem to have difficulty matching their words with the emotion and the emotion with the words that are being conveyed through the Elizabethan dialogue. The only times they can match is when they are screaming the lines or crying. It is a shame because the language they are speaking is still English and yet the two lead actors act like they have no idea what they are saying. So their dialogue comes off as stiff and flat. Seeing as how they are the two characters with the most lines, it can easily become irritating and boring. Every other actor does incredibly well, especially Harold Perrineau as Mercutio. Pete Postlethwaite as Father Laurence is so good he practically sings his lines.

The music of the film is an interesting mix. It has musical styles from hip-hop and electric guitar to a chorus chanting Latin. Shakespeare often used different kinds of music to reach his varied audience in the Globe Theater: church music, folk music, and other kinds of popular music of the time. Luhrmann continues this tradition in his version of the drama and I think that is admirable and effective.

For the most part, the characters in this adaptation are the same characters that we know from the play. Lord Capulet and Lord Montague are still just as fierce with their rivalry and as uninvolved in their children’s lives as they are in the play. Capulet is still a male chauvinist who would rather his daughter do what he says then see her happy. The nurse is still loud, does not know when to stop talking and more of a mother to Juliet than her biological mother. This film’s vision of Tybalt is just as saucy as the original.

Benvolio is still the peacekeeper and loyal friend of Romeo. Mercutio is a black drag queen who sings to a seventies disco anthem. That is certainly different. But at the same time, he is just as cynical, perverted and mischievous and full of disdain for the Capulets as his theater counterpart. Romeo and Juliet are both risk takers, they care about their family very much but not to the point they want to be controlled by them. They are determined, emotional, and angry but can still show their softer and more vulnerable sides to the one they love. They are the same characters, even if their attires are different.

The film keeps Shakespeare’s messages intact. Parental neglect is still prevalent in both the Capulets and the Montagues and we get to see the results of how they raised their children and witness their rather distant parent-child relationship.

The other important message is about young love. In most young loves, the only thing that matters is the emotions the individual is feeling. It does not matter if it was the right person or if it would last for the long term. All one knows is the pure feelings of bliss and nothing can knock one down from it. It feels so good, it must last forever. Some people I’m sure stayed with their first love. But for many other people, the chances are it was broken off and the individual dated other people to find the right person for them.

Romeo and Juliet were never allowed to go through that and this is what makes their story so tragic. Because the families did everything they could to keep the young lovers apart, that just convinced them that they loved each other even more. And they wanted to prove how wrong everyone was. The stronger the backlash, the more the teenagers resolved to be together, first to lying, then to marriage then to running away, then to ultimately taking their lives.

Read in this way, it could be said that the story is more about the tragedy of prejudice. If the prejudice of the two families was never there, the changes are the relationship between Romeo and Juliet could bloom more naturally. They could discuss it with others and figure out if this person is truly the one. However, since the strong and confusing feelings are met with such hostility, the situation is dealt with more like a battle. A battle when one must fight for who they are rather than a discovery and thus “all are punished” because every person played a part in leading to their demise.

Shakespeare understood the strong emotions of youth, the impulsive and rebellious choices that can be made and the damage that can be caused when the adults of the world are blinded by hate and do not show proper guidance. It is a story about when love is discovered but not allowed to be explored and how damaging closed minds can be and how much damage can be prevented through acceptance and listening. In the end, it is an excellent love story.

RELATED | Robin and Marian (1976) Vintage Film Review: What It is to Love a Legend

William Shakespeare’s Romeo + Juliet is not a perfect adaptation. It has its problems. But it is still memorable and fun. I recommend it if you are looking for a version of the story a bit visually different. You won’t be disappointed. Romeo and Juliet has been retold so many times. I’m sure it will continue to be retold for years to come.

Where to Watch: Romeo + Juliet is available for purchase on DVD or for rental on Amazon.

What did you think of Baz Luhrmann’s Romeo + Juliet? Do you agree or disagree about the performances of Leonardo Dicaprio and Claire Danes? Share your thoughts about the film in the comments below!

Our romance-themed entertainment site is on a mission to help you find the best period dramas, romance movies, TV shows, and books. Other topics include Jane Austen, Classic Hollywood, TV Couples, Fairy Tales, Romantic Living, Romanticism, and more. We’re damsels not in distress fighting for the all-new optimistic Romantic Revolution. Join us and subscribe. For more information, see our About, Old-Fashioned Romance 101, Modern Romanticism 101, and Romantic Living 101.
Pin this article to read later! And make sure to follow us on Pinterest.
By Moriah Burbank on April 18th, 2015