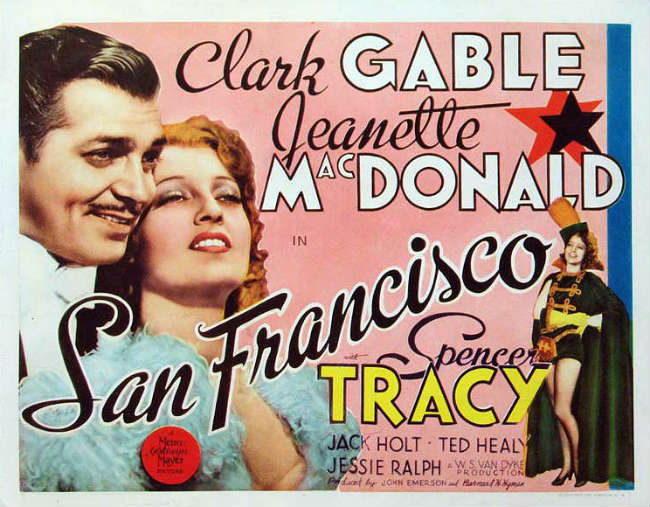 The San Francisco 1936 movie is a film I watched on a whim. It was taped on my DVR from when it aired a while back on Turner Classic Movies. I’m always looking out for another great story and this one sounded promising. One, it’s starring Clark Gable. Two, it’s a romantic period drama (my favorite). Three, it is historical fiction based on an intriguing famous event from history. And four, it’s a disaster film made before CGI and during The Great Depression. So I was definitely interested in seeing how the filmmakers would bring all these elements together. Thankfully, the film is a memorable and even essential classic worth watching with a fantastic cast including Spencer Tracy and Jeanette MacDonald, all of who give wonderful performances as the film builds to a religious climax meant to pay tribute to San Francisco and inspire hope in a time of great hardship.

The San Francisco 1936 movie (which was a huge hit that year) is a romantic period drama set in 1906 right before (and later during) the infamous earthquake that destroyed most of San Francisco. This doesn’t play out like a modern disaster film, however. Most of the movie works as a build up as we get to know the characters and follow the romance between the two leads. In fact, I wouldn’t be surprised if James Cameron was influenced by this movie when he made Titanic. 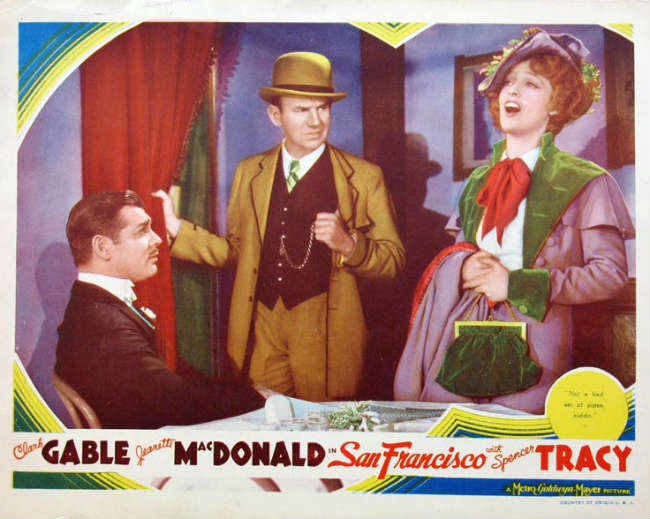 But it’s not just Titanic that I saw similarities with. For the first three quarters of the film, the story hits similar notes as the French novel The Ladies Paradise (1883) by Emile Zola. You have the young ingénue Mary Blake who comes to the big city in hopes of reaching her dreams, only to be enveloped in the world of “The Paradise,” owned by Blackie Norton (a handsome and very selfish rogue who falls for her). Instead of a department store, “The Paradise” is a nightclub, and Mary is an aspiring opera singer rather than a shopgirl. Now don’t get me wrong, San Francisco is not an adaptation of The Ladies Paradise with an earthquake thrown in, the similarities appear to be coincidental, but at times they are strikingly similar. 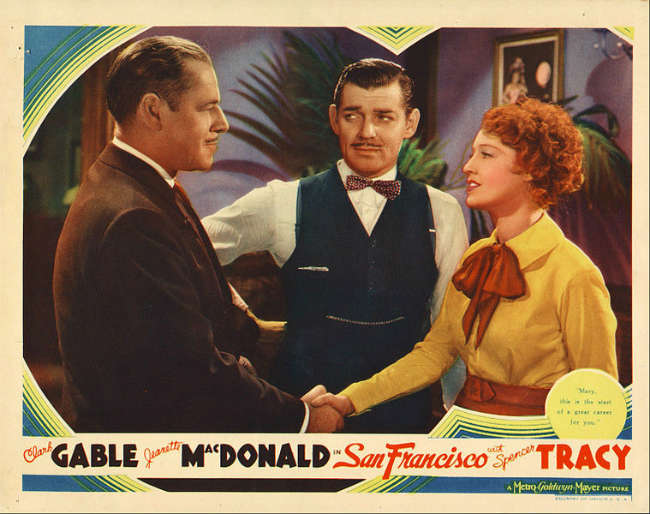 Once Mary becomes engaged to the other man Burley (who runs the opera house she eventually sings at), the similarities fade away, especially when the story becomes more about Blackie’s spiritual transformation. And then the earthquake hits. For a 1930s film, the special effects are quite impressive. It is obvious entire sets were used to film some of the earthquake scenes, which is fascinating to watch on the screen. The entire earthquake sequence with the city in flames keeps you glued to the screen. Yes, you can tell it’s fake. But what they were able to pull off was no easy feat and I was engrossed by every minute. Not to mention the epic scope of it all with seemingly hundreds of extras shown in the aftermath. Seeing the people watching the city crumble to the ground was like witnessing a piece of history. And not just the San Francisco fire – but also the Great Depression. The symbolism is clear as Blackie and the people of San Francisco triumph over hardship. And when you witness the despair, hope and even optimism in the characters, it is obvious this is meant to represent what the people felt sitting in the theater.

Besides the engaging earthquake sequence, the romance in this film is also entertaining to watch. I mean, it is Clark Gable doing what he does best – playing a rogue who falls in love. That said, in this movie there are times where he is truly unlikable and even misogynistic. So there are definite moments where you’re like: “Why would she fall for this guy?” And then you remember, “Oh yeah, it’s Clark Gable.” But it is a redemption story, and he’s so darn charming it’s hard not to forgive the guy and fall for him as much as Mary does. 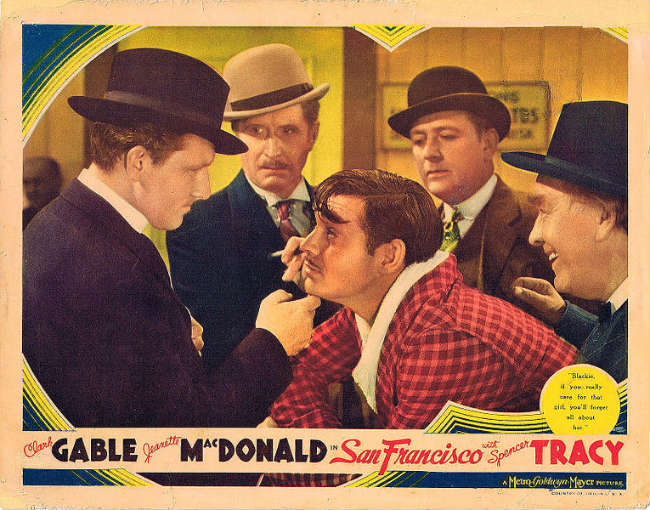 Another great part of the movie belongs to the breakthrough performance from Spencer Tracy as Father Tim Mullin, Blackie’s childhood friend who is trying to reform him. He even received his first Oscar nomination for this performance. While complete opposites, the relationship between the two reveal a heart of gold behind Blackie that helps endear him to the audience.

On top of all that, the music in the film is pretty great too, most notably the now very famous anthem song, “San Francisco.” 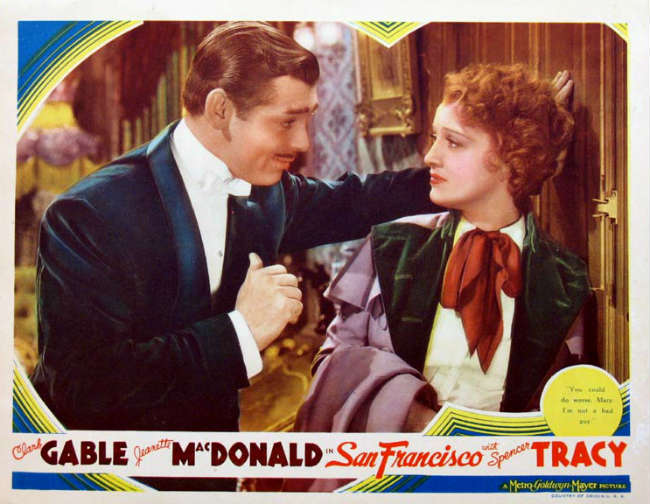 Overall, if you love classic films with an epic scope and a lot of romance, you’ll love this film. However, it’s important to remember the time period the movie came out in. This is not a movie that can be appreciated from a modern perspective. While the ending is a little heavy handed and preachy by today’s standards, no doubt at the time with The Great Depression in full swing the ending must have felt very inspirational and triumphant. So from that perspective, I found the ending quite moving. Hard times come, but people triumph. No doubt this is a movie that belongs to the people who lived through The Great Depression even if it takes place in San Francisco during an earthquake.

Our romance-themed entertainment site is on a mission to help you find the best period dramas, romance movies, TV shows, and books. Other topics include Jane Austen, Classic Hollywood, TV Couples, Fairy Tales, Romantic Living, Romanticism, and more. We’re damsels not in distress fighting for the all-new optimistic Romantic Revolution. Join us and subscribe. For more information, see our About, Old-Fashioned Romance 101, Modern Romanticism 101, and Romantic Living 101.
Pin this article to read later! And make sure to follow us on Pinterest.
By Amber Topping on December 14th, 2014