Just before World War II, Lady Sarah Ashley arrives in Australia to force her philandering husband to sell his failing cattle station, Faraway Downs. Upon arrival, she discovers her husband dead and the fate of Faraway Downs resting in her hands. Sarah slowly falls under the spell of Faraway Downs and grows attached to the land, and a little boy, Nullah. When she discovers her station manager, Neil Fletcher, is working with rival cattle rancher, Lesley “King” Carney, she fires him.

Desperate to save her ranch, and protect Nullah from Fletcher, Sarah enters into an agreement with a Stockman, Drover, to drive her cattle to Darwin in competition with Carney. What follows is a tale of adventure and romance. How one can find family, in whatever its form, in the most unexpected of places. Directed and written by Baz Luhrmann, Australia stars Nicole Kidman and Hugh Jackman.

I love romantic adventure films. I adore romantic dramas that pull you in deeply from beginning to end. When a movie leaves you dazed, an ache in your heart, you know you experienced something special. Australia promises that experience. It’s visually stunning, and there are beautiful moments. Unfortunately, Australia never quite finds its footing and falls short of the sweeping epic it tries so hard to be.

Related Post: My Journey Into Old Movies – Gone with the Wind

This isn’t to say that Australia is not an enjoyable film. It is. It’s simply an imperfect film. In fact, there is more good than bad about Australia. These bright moments are deserving of mention because, without them, Australia would have fallen flat.

The Good in Australia 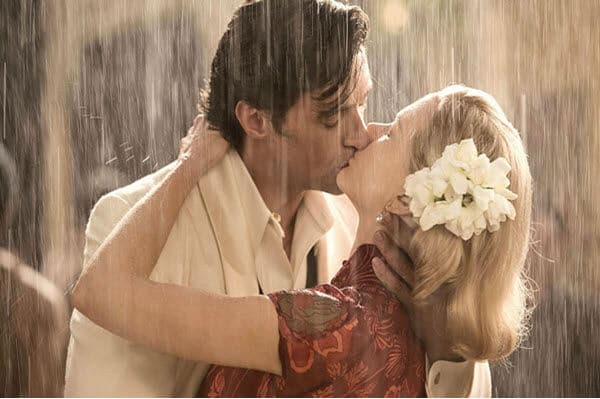 The incredible chemistry between Nicole Kidman and Hugh Jackman is breathtaking in its intensity. From the moment they meet to their romantic kiss in the rain, sparks fly between Drover and Sarah. While Drover expresses amusement and exasperation at Sarah’s expense, he also shows deep appreciation for her spunk. Sarah may appear haughty while she looks down her nose at Drover, but deep in her eyes, admiration and interest glimmer. Every scene is electric between them. 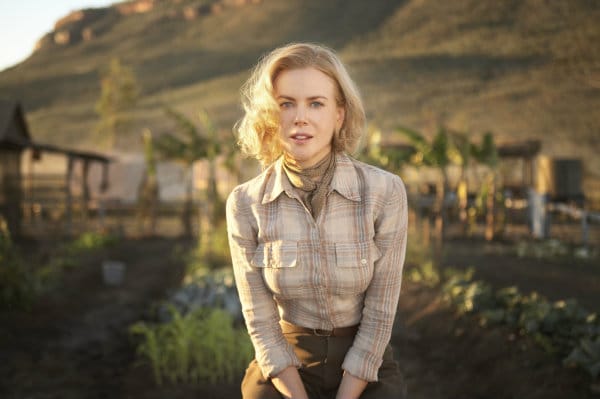 It’s hard to imagine other actors that would give Australia the same classic Hollywood feel Kidman and Jackman bring to the film. While at times I found Sarah almost too uptight or “breathy,” there was a charming naiveté to her character. Despite hard lessons learned, that innocence stays with her even as she changes.  The film beautifully captures Sarah’s journey down to the tiniest of details. From beginning to end, we see Sarah evolve. Not just in how she dresses, or talks. But also, in her gestures, her inflection and how she carries herself. More importantly, she opens her mind and heart. 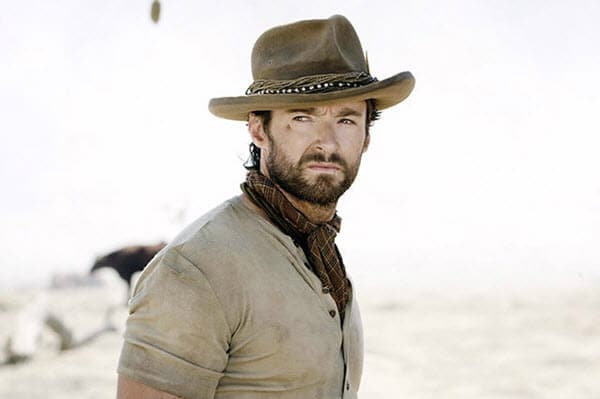 Jackman is gorgeous to look at, gorgeous to listen to, and just plain gorgeous. Drover is as comfortable in the Outback as he is in a ballroom. He knows who he is. He is firm in his convictions. As a result, confidence sits on him like a second skin. Drover doesn’t doubt, but he does fear. Jackman pulls off these complex aspects of Drover’s character in a roughly vulnerable way. It doesn’t strip Drover of his masculinity but rather heightens it. Drover hides his heart beneath a prickly exterior. Yet, Sarah (and Nullah) slowly pick away at him. While he forces her to see what she tries hard to ignore, she forces him to see her and Nullah and all they could be together. 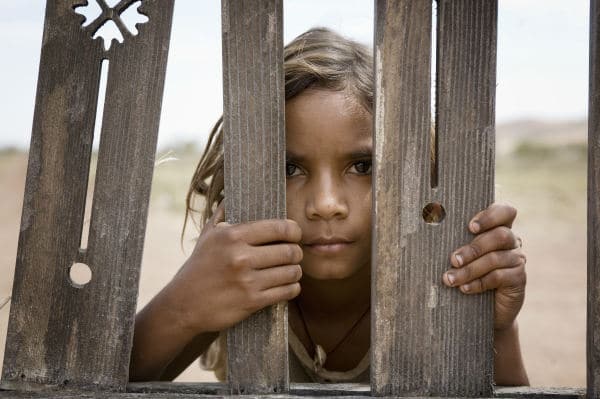 The true star of Australia is Brandon Walters. He stole this film, gave it depth and heart where it was lacking. Nullah is both innocent and ancient. His eyes are knowing even as they spark with childish delight. Polite society rejects Nullah because of his mixed blood. Yet, his family, his heritage, accepts him as he is. He is wholly perfect. In Sarah’s eyes, he is equally perfect. So much so, she often needs reminding of Nullah’s heritage. It is Nullah that reaches her, with that inner gentle wisdom so at odds with his child exterior.

Last but certainly not least, the bad guys. Australia found its primary bad guy in Neil Fletcher. As Neil, actor David Wenham was brutal. From his cold fixed stare to the very tenor of his voice, he was shiver-inducing evil. He lacked redemption and was thus the perfect foil to Drover and Sarah. Bryan Brown added his talents to the line up as King Carney. Carney is the face of polite society. Yet, beneath the veneer of polish is a ruthless businessman. What Carney wants, Carney gets.

The Not So Good in Australia

The writing is uneven throughout the film. This is likely due to the number of storylines the film packed into 165 minutes. Yes, 165 minutes. The film is long. It had to be. Along with romance and adventure, saving Faraway Downs, the Japanese invasion, the aftermath of that invasion and the feud between Neil, Sarah and Drover, director Baz Luhrmann also tried to tackle what he called “the greatest scar” in Australia’s history. I use the word “tried” because, in my opinion, Luhrmann failed.

In the early 20th century, the Australian government and church missions forcibly removed Aboriginal children of mixed race from their homes. Known as the Stolen Generations or Stolen Children, this act was a terrible period in Australian history. Yet, the film painted a gloss over it. Even romanticized it to further Sarah’s journey.

Since Australia is set just before World War II, an omission of the Stolen Generations would be glaring. Unfortunately, with all the other stories Luhrmann wanted to tell, there simply wasn’t time to do justice to the Stolen Generations. As a result, it lacked the depth it sorely deserved.

The cinematography in Australia was beautiful work. The wild color of the Australian Outback saturated every scene. Beautifully juxtaposed were lush scenes during the wet with Drover and Sarah’s fledgling romance and her growing relationship with Nullah. With a setting such as this wild country, the romance of Australia truly does shine. Don’t expect a sweeping epic but I think you’ll still enjoy the easy experience that is Australia.

Where to Watch: Australia is currently available on HBO OnDemand and to rent through streaming video services.

Our romance-themed entertainment site is on a mission to help you find the best period dramas, romance movies, TV shows, and books. Other topics include Jane Austen, Classic Hollywood, TV Couples, Fairy Tales, Romantic Living, Romanticism, and more. We’re damsels not in distress fighting for the all-new optimistic Romantic Revolution. Join us and subscribe. For more information, see our About, Old-Fashioned Romance 101, Modern Romanticism 101, and Romantic Living 101.
Pin this article to read later! And make sure to follow us on Pinterest.
By Catherine on August 4th, 2017