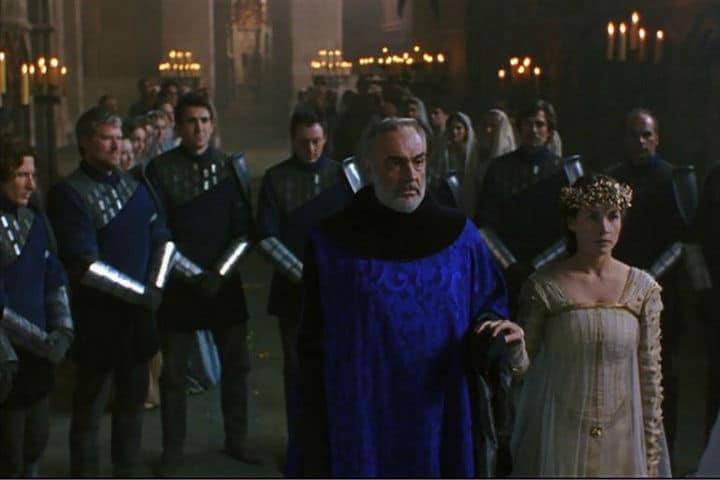 First Knight is a slightly unusual retelling of the story of Arthur, Guinevere, and Lancelot because this adaptation of the legend focuses more on the historical fiction side of things rather than the magical. It is also an old-fashioned romance and action-filled drama.

Lady Guinevere of Leonesse has accepted the hand of King Arthur in order to protect her lands from neighbouring Warlord Malagant. She also harbours genuine affection for him. While travelling to Camelot, Guinevere’s caravan is ambushed.  However, Lancelot, a mysterious travelling fighter, rescues her. Despite an initial attraction, Guinevere determinedly goes ahead with the marriage. Lancelot then follows her to Camelot and manages to rescue her again from Malagant, earning himself a knighthood in the process. Despite fighting her feelings, Guinevere soon finds herself torn between the desires of her mind and heart as Malagant closes in on Camelot. 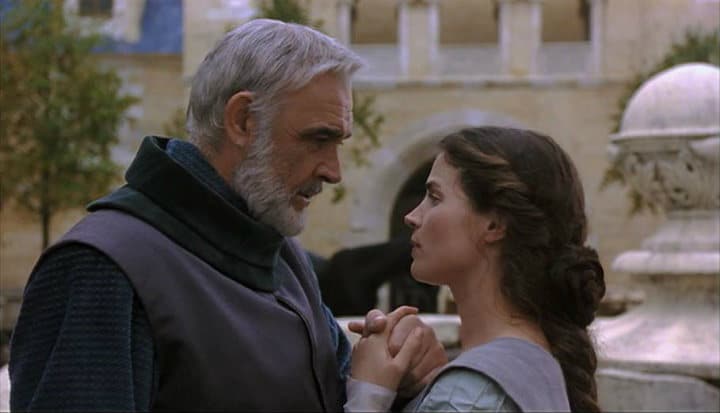 Julia Ormond is extremely likeable as Guinevere. She is written as a capable, strong heroine who takes an active role in her own rescue and is not afraid to speak her mind. First Knight showcases Richard Gere in an unusual role for him, at least in terms of genre.  He manages to be charming though his accent is a little distracting given the setting. Sean Connery is at home in the role of King Arthur, playing him with a believable balance between authority and kindness. Ben Cross does a good job of making Malagant seem like a real threat. However, the character is a little two dimensional. You might also recognise a few familiar faces playing small parts such as Liam Cunningham, John Gielgud, and Alexis Denisof.

Filmed in North Wales, the locations in First Knight are splendid and otherworldly. This creates the perfect feel for such a story. The costumes, though simple, are still quite lovely even if the designer went a little mad with the colour blue. The soundtrack has a grand, sweeping feel to it which well conveys the stakes of the tale. 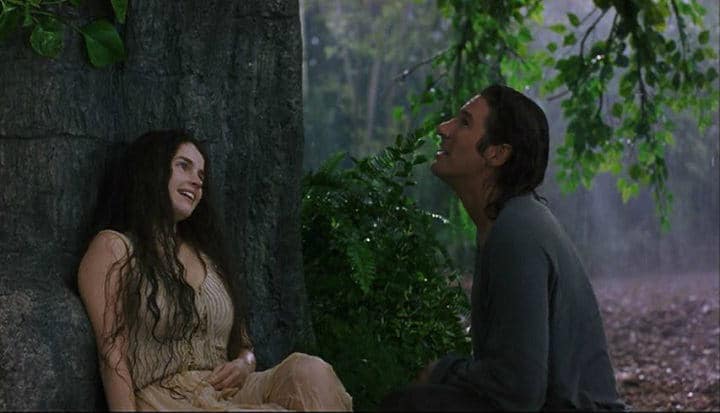 In terms of romance, most of the screen time was given over to the love story between Guinevere and Lancelot. And there are many dramatic and romantic scenes between the two. However, the film also includes a few sweet and moving moments between Guinevere and King Arthur. It is easy to understand why Guinevere is so conflicted. I feel that overall the romances were written well. 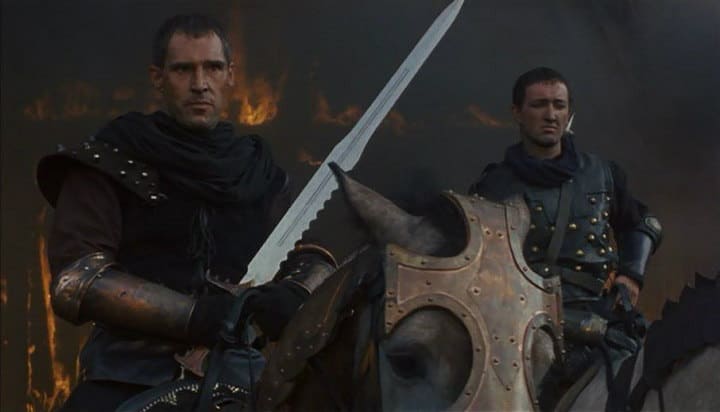 My only problem with the film was the lack of a complex villain and perhaps that the ending was a little too convenient. Other than that, First Knight is an enjoyable historical drama, with plenty of action and romance.

Where to Watch: Amazon Video and DVD

Our romance-themed entertainment site is on a mission to help you find the best period dramas, romance movies, TV shows, and books. Other topics include Jane Austen, Classic Hollywood, TV Couples, Fairy Tales, Romantic Living, Romanticism, and more. We’re damsels not in distress fighting for the all-new optimistic Romantic Revolution. Join us and subscribe. For more information, see our About, Old-Fashioned Romance 101, Modern Romanticism 101, and Romantic Living 101.
Pin this article to read later! And make sure to follow us on Pinterest.
By Elinor Cackett on July 6th, 2017