I find “simple joy” in the discovery of a new period drama. Such was the case when I found this Canadian series called, Frankie Drake Mysteries. Knowing very little about it, I promptly tracked down the first season and settled in one evening to meet Frankie Drake and her mates.

Gutsy and determined, Frankie Drake (Lauren Lee Smith) is no shrinking violet. As one of two female detectives in Toronto, Frankie knows she has to work twice as hard, but she’s learned how to throw a punch or two. Alongside her business partner, Trudy Clarke (Chantel Riley), Frankie’s making strides for her name and for women who wish to work in unconventional professions. One of the people on whom Frankie has made an impression is Ernest Hemingway (recurring guest star Steve Lund).

But a harmless flirtation must take a back seat for now. You see, all of Frankie’s attention is on her latest case, which involves the theft of a necklace and the return of someone from Frankie’s past.

Set in the 1920’s, this period drama is, without question, one of the most fun I’ve seen in a while. Created in part by the team behind Murdoch Mysteries, it’s no wonder Frankie Drake Mysteries entertains, especially given how fond I am of the 1800’s crime drama. Plus, to add a deeper connection, one episode guest stars Jonny Harris as his ‘Murdoch’ character, George Crabtree.

Razzle dazzle abounds in this mystery series. From the sets and music to the costumes and wit, this series is sure to transport its viewer to the ’20s. Speakeasy’ and morality officers are the norms in the plotting and characters. This is where we’ll begin, with the characters. Of course, everything hinges on the titular character whom we get to know well over the (all too short) ten-episode first season. 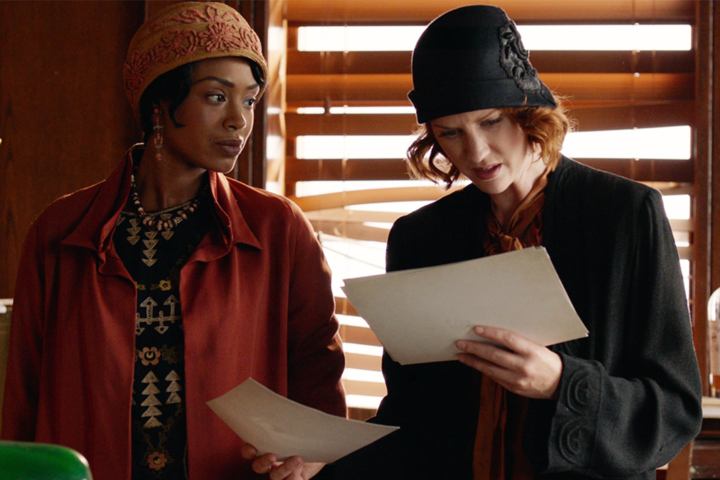 Each installment slowly builds towards the secrets of Frankie’s past, and what she did. Let’s not forget Trudy (she’s also a fascinating character in her own right along with her endearing family), and then there’s Mary. Played by Rebecca Liddiard, Mary is the one character I’d like to know more about. All we know is she’s an adorable, buttoned-up morality officer whose father was a beat cop.

This entire production is to be admired. None of the small details are overlooked, and the mysteries keep the pace quick. Some of the enigmas that walk through the doors of the Frankie Drake detective agency is the mystery of the Russian princess Anastasia, jewel thefts, and even espionage! The mysteries have “just enough” intrigue to keep the viewer guessing without becoming too dark, which I appreciate. Frankie’s witty and sassy personality makes her fun and keeps the humor lighthearted. Plus, the good news is, a second season is in the works.

For those of us who love period dramas like Miss Fisher’s Murder Mysteries or Murdoch Mysteries, this series doesn’t disappoint. It’s brimming with sass and personality but never forgets its primary goal is to entertain. In today’s TV landscape, that’s a hard thing to find.

Content Note: There’s some adult content off and on throughout the ten episode series. There are tense moments, violence and dead bodies in the morgue. Nothing is graphic. Depending on the episode, the ratings would range from TV-PG to TV-14.

Where to watch: Unfortunately, this is a Canadian series that isn’t readily available in America yet. But you can purchase a Canadian region DVD set on Amazon which is the same region as US DVDs. For UK viewers or anyone who can watch UK PAL formats, you can also find the DVD set in a UK region first season set.

Have you seen this series? Do you watch ‘Murdoch’? What are some of your favorite 1920’s period pieces? Sound off below with all of your thoughts!

Our romance-themed entertainment site is on a mission to help you find the best period dramas, romance movies, TV shows, and books. Other topics include Jane Austen, Classic Hollywood, TV Couples, Fairy Tales, Romantic Living, Romanticism, and more. We’re damsels not in distress fighting for the all-new optimistic Romantic Revolution. Join us and subscribe. For more information, see our About, Old-Fashioned Romance 101, Modern Romanticism 101, and Romantic Living 101.
By Rissi JC on June 12th, 2018