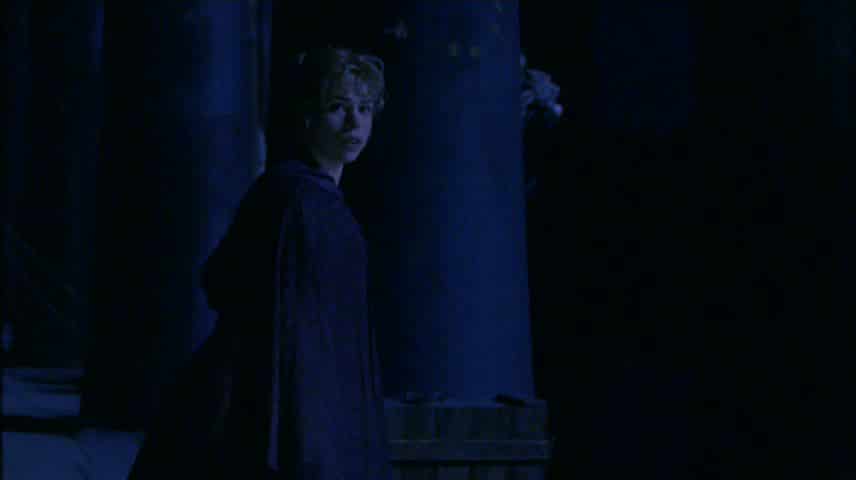 The Ruby in the Smoke Review

The Ruby in the Smoke is the first in a pair of BBC adaptations of The Sally Lockhart Mysteries by Philip Pullman. It is part mystery, part adventure, part crime story and part period drama, with a formidable and resourceful heroine. The production has many familiar faces from British television, including two from Doctor Who that fans may appreciate seeing share screen time together. Overall, The Ruby in the Smoke is a fun and exciting story with a little something for everyone.

Set in Victorian London, the story follows young Sally Lockhart who has recently lost her father in a terrible shipping disaster. When she goes to the offices of her father’s business, the mention of a supposedly innocuous phrase ‘The Seven Blessings’ causes the untimely death of his colleague. This strange encounter, along with an unusual message, will lead Sally on a perilous journey to find the ruby in the smoke and the truth about her past.  Along the way, she makes many new friends and finds an enemy in the sinister Mrs. Holland who also seeks the ruby. 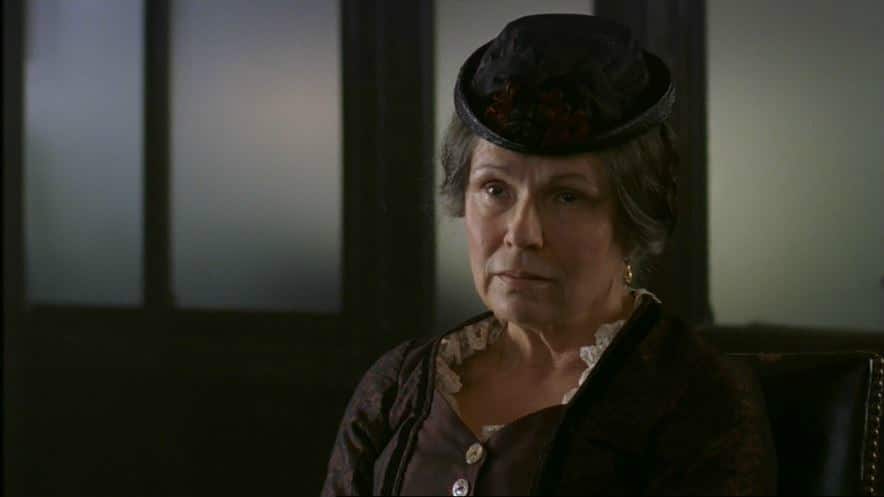 Sally is a refreshing heroine for the time period who refuses to submit to the rigid gender roles her society has placed before her.  Equipped with skills more fitting an explorer than a proper English lady she is not well suited to the options available to her. Rather than becoming a dependent on family or a governess, she strikes out on her own and builds a life for herself. 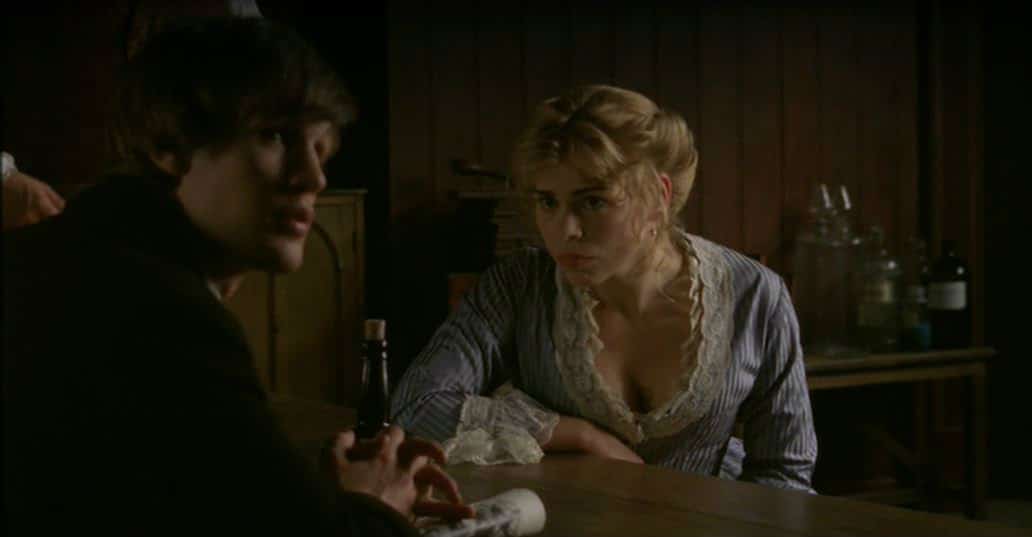 One of the most noteworthy aspects about this adaptation of The Ruby in the Smoke is the remarkable cast. Billie Piper is great as the headstrong and unique Sally Lockhart, JJ Feild (Northanger Abbey) is as charming as ever as Frederick Garland and Hayley Atwell (Agent Carter) is also fun as his sister. Then there’s Julie Walters who is actually quite sinister as the Dickensian villain of the piece, while Elliott Cowan appears as a mysterious threatening man, though barely recognisable from his other roles. As for Matt Smith, he is his usual enjoyable and playful self as Jim in a way not unlike the character he would go on to play in a hit TV series. It is strange, however, that they chose older actors to play parts written with teenagers in mind. It does at times show in the writing that the original characters were much younger than the way they are portrayed in the film, especially with Matt Smith’s character. 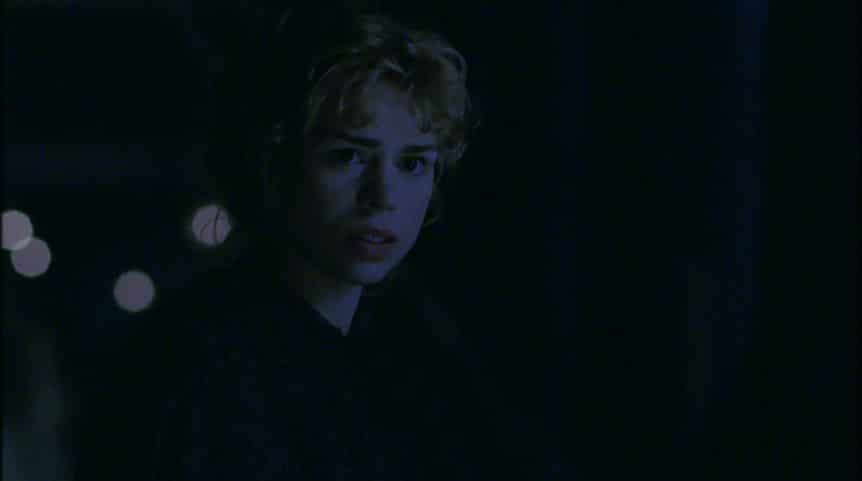 The story is engaging, taking many unexpected twists and turns. The characters are really likeable and enjoyable, as is the atmosphere.  The costumes are full of character and suit the story well. While not as large in scale or as fantastical as the series of books Pullman is best known for, The Ruby in the Smoke is nevertheless thrilling and a great choice if you are looking for a fun adventure or just an enjoyable period drama.

There is a love interest in the form of Frederick Garland, a photographer that Sally meets by chance. He helps her when she is being followed and later takes her in as a bookkeeper when she has nowhere else to go. Very little occurs between them, at least in the first book, but they have an immediate and enjoyable connection, each interaction absolutely brimming full of chemistry. 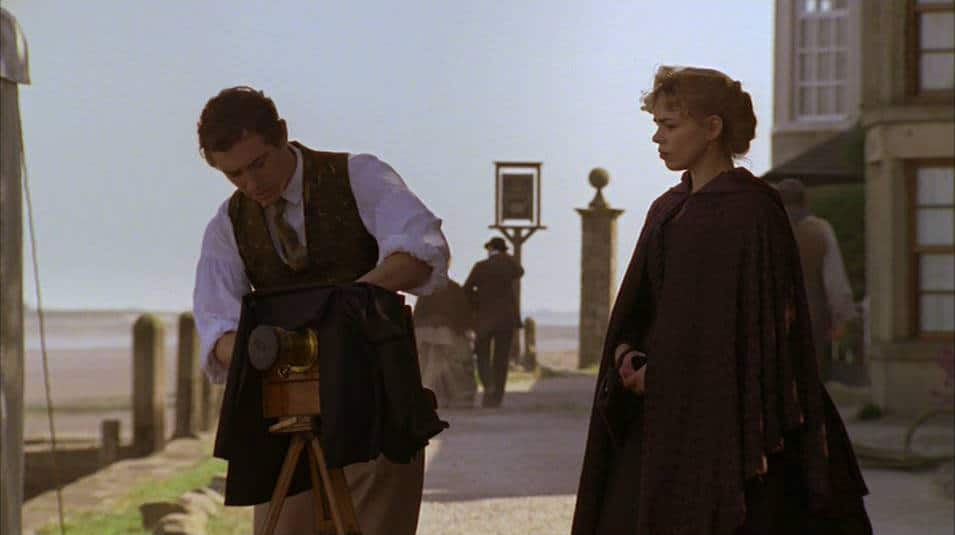 The Ruby in the Smoke is a well-written story with an awesome heroine, a good mystery, and a genuinely chilling villain. I really recommend it. While more difficult to find on DVD (more copies may become available soon), you can get used copies on Amazon or check it out on youtube!

Have you read The Ruby in the Smoke? What did you think of the adaptation and its sequel? Sound off below..

Our romance-themed entertainment site is on a mission to help you find the best period dramas, romance movies, TV shows, and books. Other topics include Jane Austen, Classic Hollywood, TV Couples, Fairy Tales, Romantic Living, Romanticism, and more. We’re damsels not in distress fighting for the all-new optimistic Romantic Revolution. Join us and subscribe. For more information, see our About, Old-Fashioned Romance 101, Modern Romanticism 101, and Romantic Living 101.
Pin this article to read later! And make sure to follow us on Pinterest.
By Elinor Cackett on November 13th, 2015