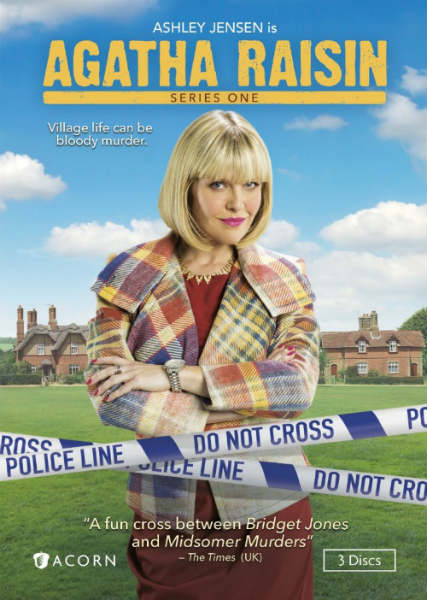 Agatha Raisin is a new cozy mystery series that is a whole lot of fun to watch. Part cozy mystery, part British comedy, each episode is filled with small town charm, fun witticisms, murder, romance, and quite a bit of laughs.

Agatha Raisin tells the story of a public relations specialist (Ashley Jensen), who leaves her “glamorous” life in London behind, to move to a quaint village. However, she soon becomes the suspect in a murder. To prove her own innocence, she sets out to find the real killer. It’s then she discovers she’s actually quite good at solving murders.

Agatha Raisin may also include one of the least likely crime-solving teams ever. You have the PR Queen, Agatha Raisin herself who is struggling with a bit of a mid-life crisis, the next door neighbor and handsome love interest James, the intelligent single Mom in her thirties Gemma, the sweet boyish Detective DC Bill Wong, and Agatha’s gay colleague Roy.

Sure, the mysteries aren’t especially difficult to solve. But this cozy mystery series is much more about the quirky characters and comedic situations anyway.

If you enjoy cozy mysteries like Miss Marple or Miss Fisher and British comedy, then you’ll likely enjoy Agatha Raisin.

I also enjoyed the romantic aspect of the series. In fact, the series has one of the most entertaining romantic quadrangles ever. You have Agatha who likes her handsome next door neighbor James, the sweet Detective who has a crush on Agatha, Gemma who is secretly in love with the Detective, and James who doesn’t know what he wants! The quadrangle puts the characters in some entertaining situations.

However, the main romance between Agatha and James does have some problems. James is a bit indecisive toward Agatha which can be rather frustrating. Still, for the most part, you’ll find yourself rooting for the two. That said, I was more invested in the “possibility” of a romance between Bill and Gemma – who have known each other their whole lives.

While not as memorable, if you enjoy cozy mysteries like Miss Marple or Miss Fisher and British comedy, then you’ll likely enjoy Agatha Raisin. It’s a fun new addition to the genre.

You can stream the TV Pilot/TV Movie and the entire first season on ACORN TV.

Content Note: This series is TV-14 and includes sexual innuendo and some mild violence.

Have you seen Agatha Raisin? What are your thoughts on this new series?

Our romance-themed entertainment site is on a mission to help you find the best period dramas, romance movies, TV shows, and books. Other topics include Jane Austen, Classic Hollywood, TV Couples, Fairy Tales, Romantic Living, Romanticism, and more. We’re damsels not in distress fighting for the all-new optimistic Romantic Revolution. Join us and subscribe. For more information, see our About, Old-Fashioned Romance 101, Modern Romanticism 101, and Romantic Living 101.
Pin this article to read later! And make sure to follow us on Pinterest.
By Amber Topping on October 19th, 2016