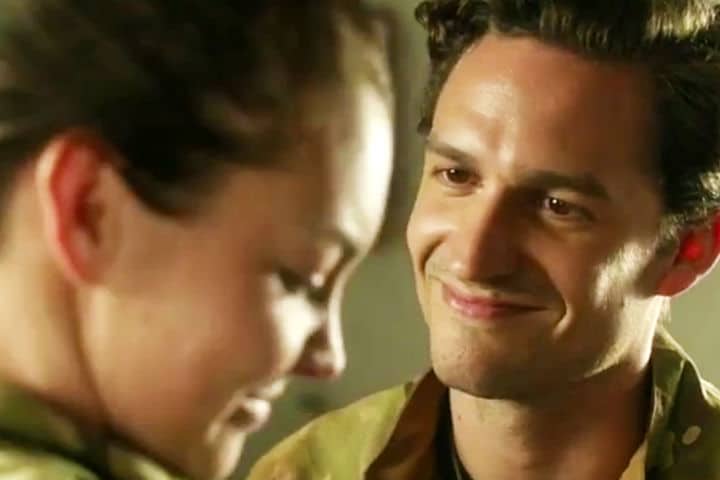 THE SHOW: Our Girl

THE ROMANTIC MOMENT: “Come back to me” aka “Rosabaya”.

Afghanistan serves as the backdrop of this BBC drama, Our Girl. Molly Dawes (the Our Girl the title refers to) is a newly qualified medic in the Royal Army Medical Corps. The show follows her on her first international deployment. Molly is headstrong, independent, uncannily frank and a little disobedient at times. Ironically as you can already surmise, she is the antitheses of what the harsh, regimented environment requires.

RELATED: Romantic Moment of the Week – Descendants of the Sun and Shoelaces

At any rate, with Molly adapting to hostile climes, one hardly expects to find love blooming amidst explosions and the very real threat of danger. On the other hand, now that I read that back, that’s potentially exactly the conditions under which the best romances tend to develop. You know the trope I’m referring to right? The forbidden attraction between soldiers of differing ranks where protocol dictates that the rules always supersede affection of any kind. Yes, the good kind!

Captain James is Molly’s superior officer and is, therefore, the man responsible for ensuring she makes it through her deployment alive. Consequently, from the moment they meet, Molly is the proverbial fish out of water around the calm, composed handsome Captain. In addition, she is always saying the wrong thing, is intimidated by his rank and education and therefore struggles to form her thoughts coherently under his inscrutable gaze. As a result, James doesn’t know what to make of the outspoken young women who unwittingly challenges his purpose and beliefs with her candour and honesty.

Compounding the problem is the fact that they couldn’t be more different – textbook opposites attracting like moths to a forbidden flame. James is well educated, from a wealthy family, controlled and lives his life by observing the rules. By stark contrast, Molly has barely finished her formal schooling, has been poor her entire life, is street smart, emotional and wears her heart on her sleeve. I know, fertile ground for epic romance to smoulder its way into a fiery blaze! Careful now, spoilers ahead!

The Lead In for Molly and Captain James: You’re Going Home 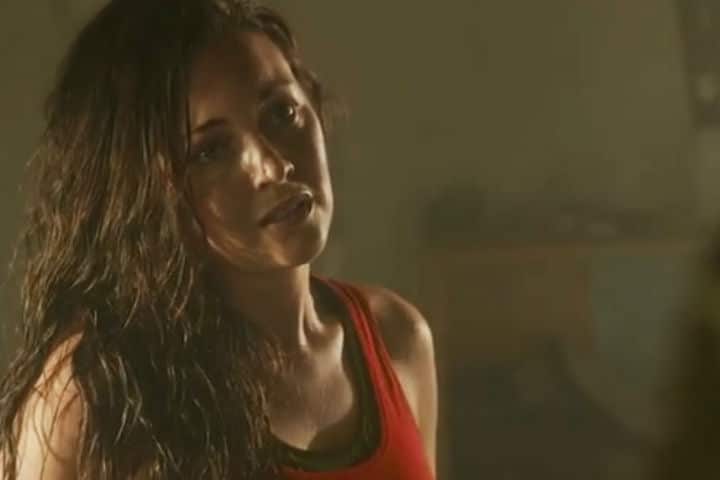 Molly is due some leave and must return to England for a short stint. While she is packing, James visits her tent to spend a tantalizing moment alone with her. Well, not really. I made that up. Subconsciously, however, I tell myself that’s exactly what he was up to. In any case, in the context of the scene, he’s there to tell her a replacement medic is on the way to relieve her while she is off duty. However, Molly’s experiences have irrevocably changed her. She’s also hesitant to leave her team – and James – behind. James realises something is bothering Molly and against his better judgment, stays and listens. Usually, he is prone to being curt and to the point. Surprisingly, he offers her some advice instead of his usual lectures. “I do not get involved, you should not get involved, DO NOT get involved!”

Don’t think too much. Just do the job you’re bloody good at and we’ll be home by Christmas.

“I just feel so sad about it all sometimes,” she says. Her seemingly endless compassion for others continues to surprise him. However, James has also come to ask a favour.

The Romantic Moment Between Molly and Captain James: I Have a Request 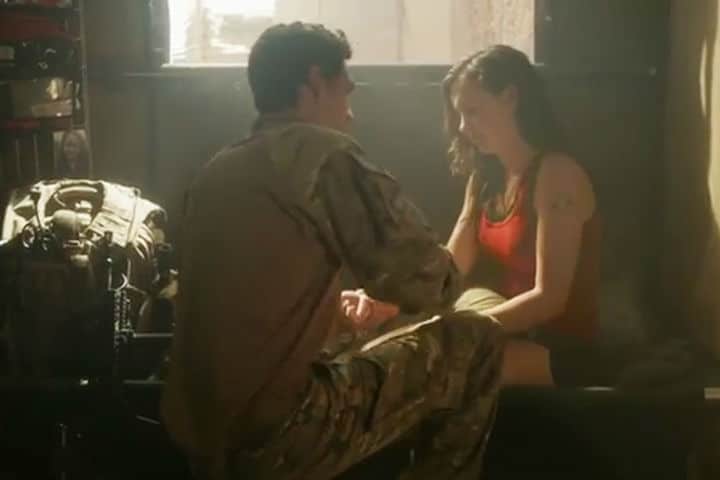 Now dear reader, we’ve reached the moment of imminent swooning. Therefore, reach for your invisible seatbelt and buckle up – you are not prepared.

Now Dawes, London, the Nespresso shop on Regent Street. Go and buy me some Rosabaya coffee capsules and I will adore you for always.

Kneeling beside her as she sits on her military-issued cot, James retrieves a black felt marker and reaches for her forearm. In a handwriting that might be best served as an official Microsoft word font, he writes Rosabaya on her skin in elegant cursive letters. 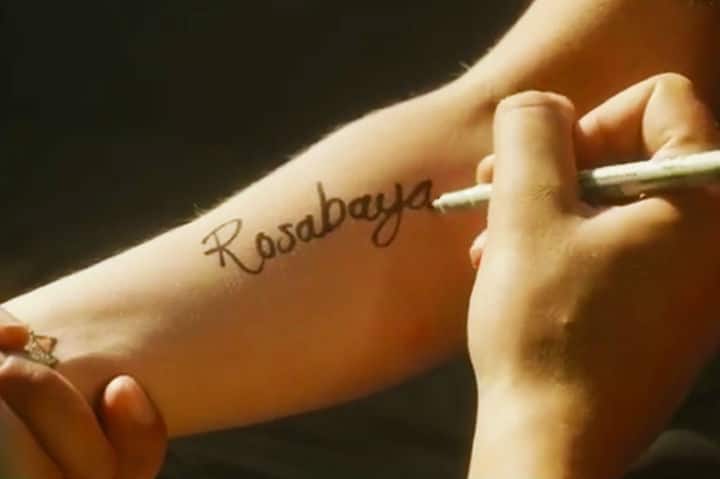 Since when is a man scribbling his fave coffee order on your arm supposed to be so strongly correlated to cardiac arrest? Also, I don’t know how Molly (who’s a medic I remind you) isn’t reaching for some version of army-approved smelling salts and sniffing – nay snorting – for dear life. In any case, I doubt a hastily ripped page from a notepad with the very same words would have had quite the same effect. 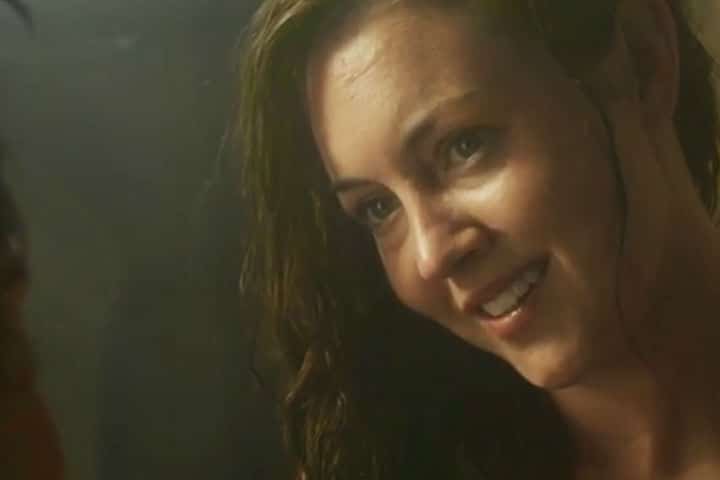 Surprisingly, James has never been this overt and as a consequence, Molly’s in shock at his reveal. No doubt she is probably flailing uncontrollably on the inside – lecturing herself on how to Be Cool!

But dear reader, now he’s touched her, there’s no going back. Their fingers brush tentatively and it’s poignant and romantic as they’re both moved and unsure in equal measures. And so, as a consequence of his honesty, the stunning role reversal in their usual behaviour is why I love this moment. In a show of uncanny vulnerability, James is wearing his heart pinned to his chest. Listen, I feel quite mindless at this point, figuratively rolling about in the gutter as I fangirl shamelessly. Shame-less-ly. Molly and Captain James’ fingers interlace, the bright Afghan sun illuminating this tentative step towards the release of their repressed feelings. But this is a functioning military base camp and regrettably, privacy does not exist. They are jarred back to their harsh reality. James steps back quickly, placing the appropriate distance between them. His mask back in place, he stoically nods his goodbye, leaving Molly – and me – with our collective emotions a swirl. And so the only proof Our Girl Molly has that anything inappropriate passed between them is the felt-tipped temporary Rosabaya tattoo on her forearm.

I know, all together now… *sigh*

Have you seen Our Girl or tried Rosabaya coffee capsules? Do you love the romance between Molly and Captain James? What do you think of Captain James and Molly’s romantic moment and did it make you swoon? Or should I seek medical advice to control my fainting spells? Comment below and let me know!

Our romance-themed entertainment site is on a mission to help you find the best period dramas, romance movies, TV shows, and books. Other topics include Jane Austen, Classic Hollywood, TV Couples, Fairy Tales, Romantic Living, Romanticism, and more. We’re damsels not in distress fighting for the all-new optimistic Romantic Revolution. Join us and subscribe. For more information, see our About, Old-Fashioned Romance 101, Modern Romanticism 101, and Romantic Living 101.
Pin this article to read later! And make sure to follow us on Pinterest.
By Naazneen Samsodien on May 27th, 2017