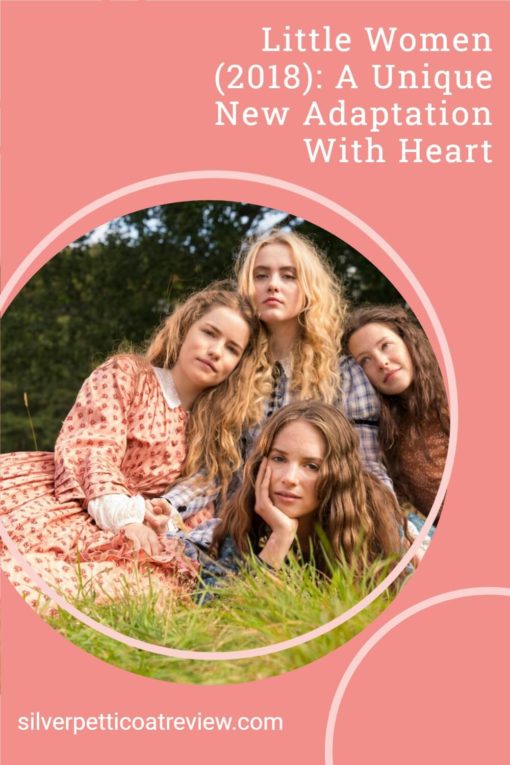 Little Women is an ageless story. Like many others, I grew up with Meg, Jo, Beth, and Amy. However, my first introduction to Louisa May Alcott’s classic children’s novel wasn’t as a reader (though I did eventually read the book as well). Instead, my foray into the world of Little Women was on the big screen.

And, for me, the Winona Ryder film was magic (except for the terrible ending as I saw it). So, how could any other interpretation of the famous novel live up to my lofty expectations, expectations I dare say others share with me?

No one could make me cry as much as Claire Danes’ Beth, enrage me like Kirsten Dunst’s young Amy, or laugh as much as Winona Ryder’s timeless performance as Jo March. And certainly, no one could compare to the sizzling chemistry between Jo and Laurie that hurt all the more when we don’t get that satisfying happy ending.

In comparison, the new BBC/PBS miniseries would always fail under such intense scrutiny. Nevertheless, when I heard Heidi Thomas of Call the Midwife fame had penned the screenplay, I had hope.

Even the casting was divine. Emily Watson, Michael Gambon, and Angela Lansbury sounded providential. On paper, everything was almost perfect.

I wanted the new version to be just as good as the 1994 film. Every generation deserves their own adaptation of Little Women after all. So, I went in believing the BBC miniseries could live up to the hype.

RELATED: Words of Wisdom From The Women of Literature and Literary Film Adaptations

Then 30 minutes into the first episode, I felt an emotion so unexpected, I was shocked. Boredom. Why was Little Women so dull? Something was missing. It took me a few days to contemplate the answer.

The emotion. The fun. The March sisters no longer put on plays or contemplated their “burdens.” Heidi Thomas modernized Louisa May Alcott’s morality novel for a more secular 2018 audience. Sure, religion is still there between the lines, but the essence of the characters are lost even if just a little.

What remains behind are the famous moments from the book but these are just moments. The true spirit of the novel never truly surfaces and the miniseries fails to feel quintessentially American in what is considered one of the best children’s novels of American Literature. Perhaps this was due to it being a British production.

That all being said, episodes 2 and 3 greatly improved on the first episode and that comes down to good writing and an excellent cast. So, let me talk about the many positives.

Maya Hawke, the daughter of Ethan Hawke and Uma Thurman, captured Jo March beautifully. I believed she was a tomboy passionate about writing with intense loyalty and love for her sisters. And if this miniseries was any indication, I see huge things in her future as an actress.

Then there is Emily Watson as the beloved Marmee. She captures brilliantly Marmee’s softness but also her hardness, a trait often ignored in adaptations.

Similar to Jo, she once had a bad temper. Here we see her always attempting to keep her strong emotions in check and I loved that.

As for the adorable Laurie, Jonah Hauer-King plays him to perfection. Indeed, he interprets him in a very Jonathan Crombie Gilbert Blythe sort of way. It almost felt like a nod to Crombie’s performance and as a HUGE Gilbert fan, I appreciated that immensely.

Unfortunately, this choice made my heart hurt all the more when Jo refuses to marry him, and then he goes off with Amy…Ugh. Can you tell I’m a Jo/Laurie fan?

But the actress who steals the show is hands down Angela Lansbury. Just one scene near the end of episode 3 gave me goosebumps. Suddenly, Aunt March became ever so real. So human. I could feel her emotions and in return I became emotional.

Generally, the miniseries does succeed. The story follows almost all the favorite scenes. And the writing, in true Heidi Thomas form, is spectacular with a lot of heart.

She knows how to write period dialogue and she does it well. I even appreciated her attempt to modernize and improve Professor Bhaer.

After his condescending remarks about Jo’s sensational writing (which always makes me roll my eyes), Jo defends herself and he apologizes. This does not happen in the original story.

Still, as someone who has never liked Professor Bhaer and all his fatherly condescension, I REALLY sort of wished we could see the story as it is: warts and all. Professor Bhaer is no romantic hero and not even an intellectual equal as this adaptation portrays.

Rather, he is a father stand-in who “teaches” Jo how to be a proper woman and housewife, giving up her dreams as a writer to run a boy’s school at Plumfield.

I’m still of the mind to believe if Jo refused to realize Laurie was her best friend and soulmate, that she should have pursued a writing career as a literary spinster. The novel is based on Louisa May Alcott’s life after all…

But I digress. Many may appreciate the modernism of the adaptation. It does make Professor Bhaer more tolerable. And everything else is fine if not amazing. Meg and Beth are likable versions of the characters.

Beth’s social anxiety or shyness is intensified here in a really interesting way. I do wish, however, I felt more emotion upon her death. I’m not sure why I failed to connect.

What doesn’t work at all is Kathryn Newton as Amy March. Not because the actress can’t act but because she plays both young and older Amy which was a creative choice that backfired.

Amy has always driven many of us crazy but we tolerated her because she was young when she burned Jo’s book. That is not the case here. Indeed, Amy never really ‘ages’ as she does in most adaptations. So, no young Amy versus mature Amy.

Instead, we have an adult performing scenes as if young but this comes across as extremely affected and narcissistic. She looks ridiculous with baby facial expressions and an immature voice.

By the time she marries Laurie, I could barely stand it. The choice made no sense at all and cast the entire series in a negative light. Perhaps Kathryn Newton would have fared better as an older Amy but we will never know.

As a whole, Little Women is a beautiful period drama with excellent acting, writing, costumes, and set design. But as an adaptation, it does lack something special. Just that touch of magic to make it soar all the more.

Next time, remember that the spirit of a story is more important than the plot.

What are your thoughts on the 2018 adaptation of Little Women? Do you agree with me? Which adaptation do you like best? Sound off below…

1 thought on “Little Women (2018): A Unique New Adaptation With Heart”