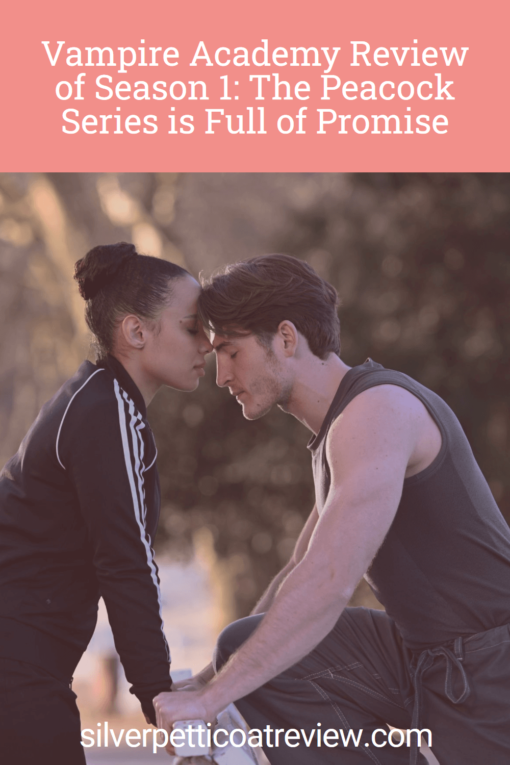 Vampire Academy, the bestselling teen romance YA series by author Richelle Mead, was first published in 2007. Fifteen years later, we finally have the TV show we’ve been waiting for!

But does the new adaptation live up to such high expectations? Would TV Dimitri be just as dreamy as the book Dimitri? And how about the characters? Would they be similar or drastically different from our book imaginations?

Produced and written by Julie Plec (The Vampire Diaries) and Marguerite MacIntyre (Sheriff Forbes in TVD), the co-showrunners have much to live up to.

But before I review Vampire Academy and how they handled the source material, let’s look at everything you need to know about the new paranormal romance series from Peacock!

The Vampire Academy television series premiered on September 15, 2022, on Peacock. The final episode aired on October 27, 2022, with ten episodes of Vampire Academy airing.

From the trailer alone, you can see tons of fight scenes, romance, intriguing worldbuilding, and a colorful visual atmosphere – all parts leading to the creation of an entertaining show.

The Official Synopsis from Peacock:

From executive producers Julie Plec & Marguerite MacIntyre comes a story of friendship, romance and danger. In a world of privilege and glamour, two young women’s friendship transcends their strikingly different classes as they prepare to complete their education and enter vampire society.

One as a powerful Royal, the other a half-vampire Guardian trained to protect against the savage ‘Strigoi’ who threaten to tear their society apart. That is, if Royal infighting doesn’t do the job first.

Vampire Academy has a promising cast of fresh, young talent with a few familiar actors.

In the main role, newer Australian actress Sisi Stringer stars as Rose Hathaway, the snarky and fierce Dhampir (half-vampire guardian) who is best friends with the Royal, Lissa, and begins falling in love with a new guardian, Dimitri.

Stringer has experience as an action star appearing in movies like Mortal Kombat. Her action experience makes her a perfect fit for a strong Dhampir ready to put up a fight.

Royal princess (and possible heir and queen to the Dominion) Lissa Dragomir is played by Venezuelan actress Daniela Nieves. When she loses her entire family in a tragic car accident, she’s forced into a new world of political responsibility – all while falling in love with a maligned fellow royal, Christian Ozera.

The main love interest, Dimitri Belikov, is played by newcomer Kieron Moore (The Sandman, Masters of the Air), a British actor and former boxing champion. He brings a brooding intensity mixed with expert fighting skills – making him believable in the role.

Next on the cast is a familiar favorite: André Dae Kim as Christian Ozera, a royal outcast because his parents knowingly chose to become Strigoi (soulless vampires). He’s starred in popular shows like Star Trek: Strange New Worlds, Lock & Key, and Salvation.

If anything, Vampire Academy is ambitious in scope. Take the royal luxury and steaminess of Bridgerton, add in Harry Potter boarding-school rule-breaking as well as the mythology’s version of a sorting hat (where the Moroi discovers their elemental powers), and blend that with all the previous supernatural tv series on the WB and the CW and you’ll find Vampire Academy.

Is it somewhat derivative? Yes. Is it addictive and entertaining? Also, yes. Most importantly, the Vampire Academy TV series is intensely romantic.

In Vampire Academy, there are three different types of vampires. First are the royal and upper-class Moroi vampires, the elite masters. The Moroi stay out of the sun and drink blood from feeders, but they do not kill.

Imagine the royal and upper society of a Regency novel; instead, vampire royals are hidden in the modern day. The Moroi also have power over the elements, each Moroi developing an affinity for one more than the others.

A Queen leads the Moroi with people under her scheming for the crown, especially since she’s about to announce the heir.

Below the upper classes are the Dhampir vampires, who are vampire-human hybrids with expert fighting level skills and enhanced strength.

The Dhampirs only have two purposes for their royal, and upper-class masters: Either become guardians to the Moroi, sworn to protect the Moroi with their lives, or become breeders to create more Dhampir soldiers to safeguard the Moroi.

Finally, are the Strigoi, the undead zombie-like immortal vampires who slay without conscience. The mysterious Strigoi are also more intelligent than they seem, with secrets of their own that unravel as the season progresses.

Unfortunately, the Moroi and Dhampirs can transform into Strigoi by killing or being turned by another Strigoi against their will. Dhampirs and the Moroi fear the Strigoi and the unexpected assaults against their kind.

But when the strikes start increasing and seeming more coordinated than in the past, our protagonists ask why.

The story follows two best friends: Rose, a free-spirited and rebellious Dhampir who fights against school/society rules, and Lissa, a royal Moroi who sees and treats Rose as her equal.

Rose’s only goal is to one day become Lissa’s Dhampir guardian, but after Lissa’s entire family dies in a tragic accident, Lissa may need to take the throne one day, and all their innocent plans change overnight.

Not to mention, Lissa’s elemental gift is spirit, a secret that she and Rose have to keep hidden from the establishment.

Meanwhile, Christian, a new Moroi student, comes to the school. Christian is quickly an outcast because both of his parents chose to become Strigoi. He struggles to understand their abandonment but finds solace in Lissa, who also recently lost her entire family.

Their romantic soul connection is beautiful to watch on screen, partially because the two actors are perfectly cast. Can the two be together? Certain political ambitions may get in the way of these lovebirds, but you’ll root for them and their chemistry.

Christian is a particular highlight of the show because he’s not a coward, unlike most other Moroi. He wants to do what’s right and will even use his elemental power of fire to protect the Dhampir and his friends.

Then there is Dimitri, the school’s head guardian and love interest for Rose. Dimitri is all about following the rules, but underneath is a brewing passion that intensifies as he gets to know Rose.

Their relationship builds more from equality in this version, unlike the teacher/student relationship in the books. There are other changes as well, including his not having a Russian accent, but overall, the essence of these two and their love is present.

RELATED: Romantic Moment of the Week: Dimitri and Rose

Indeed, the forbidden aspects come out more in a La Femme Nikita sort of way where love gets in the way of duty. The Michael/Nikita romance influences the show, and I appreciate it, particularly when Dmitri starts breaking the rules for the love he shouldn’t have for Rose. It’s swoony stuff.

At the same time, you worry these two can’t be together because that’s not the life allowed for the Dhampir guardians.

Victor Dashkov and the Throne

Aside from the romance are the political ambitions for the throne, bringing aspects of a political drama to the show. Victor Dashkov, a royal council member, wants to do what’s right for the Moroi and the Dhampir, particularly when the wicked and cunning Tatiana Vogel shows up to fight for the crown.

She has dangerous ideas, and Victor will do anything to stop her, but how far will he go to win? And how will he change along the way?

With royal scheming, fascinating vampire mythology, and several addicting romances, Vampire Academy is a paranormal treat for those who love the genre.

Nevertheless, the show has more than a few flaws, like the 2014 feature film adaptation starring Zoey Deutch, which was more like Mean Girls.

As a YA book adaptation, it’s disappointing that the 2022 version is explicit in a way the books (written for teens) never were. In particular, the F word is thrown in constantly, creating moments of clunky dialogue. The strong language feels forced, awkward, and sometimes even cringy.

Indeed, the writers should focus more on quality writing with dialogue that is more emotional than vulgar in a possible Season 2.

Furthermore, occasionally, there’s an unnecessary explicit sex scene. I say unnecessary because these scenes are entirely unimportant to the story.

Again, it’s awkward and tonally out of place. Throwing in strong language and explicit scenes without purpose to the story does not create great art or even a great show.

Do Mason and Rose need to sleep together when they never did in the books? No. Emotional connections can be stronger.

Vampire Academy is not Bridgerton, a book series written for adults, by the way. But they want to be. Bridgerton is steamy with a purpose (and Season 2 was far less explicit than the first season).

Vampire Academy’s steaminess has no purpose other than a desire for an unnecessary TV-MA rating, and it’s silly in what is an otherwise entertaining, if also a low-budget show. The show can be something other than True Blood, too. Instead, the writers should let the fantastic characters and mythology speak for themselves.

Nevertheless, I do love the story and most of the main characters. While I disagree with a few creative choices and deviations from the books, the show, much like The Vampire Diaries, is entertaining.

It’s also romantic, with several relationships to root for. So, give this a chance if you are okay with strong language and graphic scenes.

Here’s to hoping Vampire Academy will lessen the unnecessary content if given a second season. It would improve the show immensely.

But overall, the writers did a good job, this vampire show has a ton of potential, and it’s off to a promising start.

WILL VAMPIRE ACADEMY HAVE A SECOND SEASON?

At the time of this review, Vampire Academy has not been renewed for Season 2. The series has had mixed reviews from critics and the audience, but the show has a lot of promise to become a hit.

It is always a mistake to underestimate the power of the vampire genre in entertainment. Too many vampire romance shows like Moonlight and Blood Ties were canceled by networks too soon because executives ignored trends. (These shows were unwisely canceled just before the first Twilight movie was released.)

In promising news, Julie Plec, at the 2022 NY Comic Con, announced that they’ve planned for Season 2 and have many ideas.

Here’s to hoping there will be a renewal announcement from Peacock soon.

WHERE TO WATCH VAMPIRE ACADEMY

You can currently watch Vampire Academy on Peacock and Peacock Premium. The entire first season is available to stream.

Did you watch The Vampire Academy on Peacock? What did you think of season 1 of the new series? What do you hope to see in Vampire Academy Season 2? Discuss in the comments below.