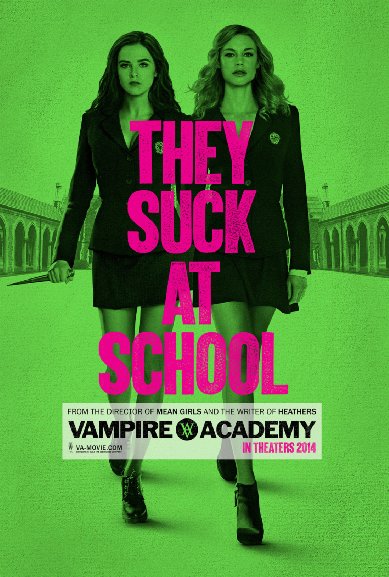 Rose Hathaway is a Dhampir, half human/vampire, guardians of the Moroi, peaceful, mortal vampires living discretely within our world. Her legacy is to protect the Moroi from bloodthirsty, immortal Vampires, the Strigoi. This is her story.

This movie may have been marketed as Mean Girls meets Harry Potter (more parody than Gothic), but the reality is far different and far more satisfying in my opinion. It’s much less Mean Girls and much more The Breakfast Club with a dose of vampires and magic. If you loved the 80’s Brat Pack movies, you will love Vampire Academy. Yes, it’s campy (in a good way), and yes, some people may not enjoy that. But, the camp is quite intentional, I assure you.

In this adaptation of Richelle Mead’s wildly popular series, we meet Rose (Zoey Deutch), a half human/half vampire hybrid called a Dhampir, who is training to protect her best friend Lissa (Lucy Fry), a Moroi which is one type of vampire. She’s also a princess. After having been on the run for a year, Lissa and Rose are finally discovered by the academy’s guardians and taken back to school. At the academy, both Moroi and Dhampir train to fulfill their future roles in this underground society of vampires. Moroi train to learn how to use their elemental abilities, and the Dhampir train to become guardians of the Moroi.

However, the dangers Lissa and Rose faced on the road may not be as bad as the danger they face at school. The Strigoi, evil vampires, may not be the only bad guys Rose needs to look out for. Not everything is as safe as it seems at this school, and we get to watch as plots unfold and danger arises for our daring heroine Rose.

Director Mark Waters’ take on the film is singularly unique in our 21st century vampire movie world. He harkens back to the good old days of 80s Brat Pack films such as Sixteen Candles, The Breakfast Club, and especially Pretty in Pink (Duckie reference and all). While the plot of the story mixes a great deal of Harry Potter like magic with vampire mythology, Waters doesn’t focus as much on this aspect of the tale. Rather, he centers in on the social aspects. While there may be blood, death, and fangs here, this is no Twilight wannabe. Mead’s story also focuses heavily on school rivalries, those mean popular girls, and cute angsty guys. We have the typical school cliques that Rose and Lissa have to deal with, along with the trials of being young, discovering boys, and other coming-of –age dynamics.

Rather than take things too seriously, Waters does an admirable job of having a bit of fun with the coming-of-age genre. He camps it up with Brat Pack  like sarcasm and wit from Rose, the back and forth between the different groups in the school, and the angst of young high school love whether between Christian and Lissa or Rose and Dimitri. For those fans of the book, you need not worry! Dimitri was perfectly cast, the romance quite good once it picks up in the second half of the film. Overall, Waters’ lighthearted irreverence makes the movie fly past in an enjoyable whirl, and leaves you wanting more. Here’s to hoping a sequel is in the works (if only more people would give it a chance in theaters).

If you liked those 80s Brat Pack films then you will like this. I thought Mark Waters did a fantastic job of not taking the vampire/fantasy genre too seriously, and giving us something lighthearted and fun, while knowing when to be serious as well. Rose is a singularly entertaining character and the drama that unfolds in the plot is just plain great entertainment. I give it two thumbs up.

What did you think of Vampire Academy? Sound off below…

For a deeper look into Dimitri and Rose, check out Autumn’s pick for Romantic Moment of the Week

Read all of our film Reviews here.

Love vampires? Read why in Autumn’s article, So You Love Vampires.

Our romance-themed entertainment site is on a mission to help you find the best period dramas, romance movies, TV shows, and books. Other topics include Jane Austen, Classic Hollywood, TV Couples, Fairy Tales, Romantic Living, Romanticism, and more. We’re damsels not in distress fighting for the all-new optimistic Romantic Revolution. Join us and subscribe. For more information, see our About, Old-Fashioned Romance 101, Modern Romanticism 101, and Romantic Living 101.
Pin this article to read later! And make sure to follow us on Pinterest.
By Rebecca Lane on February 14th, 2014