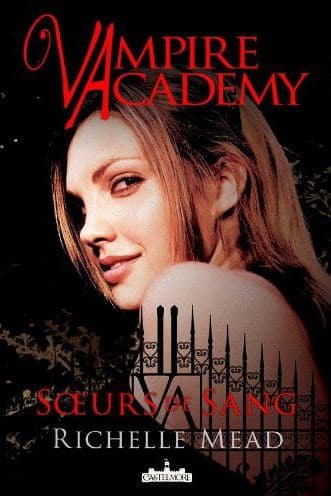 In the world of Vampire Academy the ruthless Strigoi (immortal dead vampires) seek the Moroi (mortal vampires) for their magical powers. Young Rose Hathaway is a Damphir (part vampire and part human), whose one goal in life is to train to become a guardian so she can protect her best friend, Lissa Dragomir, who happens to be the last of the ancient royal Dragomir Moroi.

A crush on a perfect mentor and fighting to ensure Lissa’s safety keeps Rose busy, while Lisa battles inner and outer demons of her own. Teenage social politics is the least of the girls’ worries as they fall for the temptation of forbidden romance and dark magic in this thrilling contemporary series.

Vampire Academy is a light engrossing read. The book is a thrilling mix of a vampire world rich in details, crafted deftly by Richelle Mead, interspersed with daily teenage boarding school drama.

The beautiful and hot headed Rose has to control her rebellious wild side so she can train to be a bodyguard for Lisa. Concentrating on training is specially tough when her mentor turns out to be irresistibly desirable. Dimitri is older, good looking, strong, silent and dangerous. The attraction between the two and any scene with both characters is sure to make you swoon and wish for more. Both are competent, invigorating and complement each other to perfection.

Lisa is also quite an interesting character. We get glimpses into her magical abilities and how special she is, but the more she embraces her powers the more despair enters her life. The bright spot for her is her enigmatic classmate Christian. Their conversations and hidden rendezvous are exciting and add a nice layer to the relationships.

Another interesting aspect is the unshakable bond between Rose and Lisa. Its true significance is never fully revealed which adds to the suspense. But, even though we don’t know all the implications yet, their firm friendship throughout the story is a pleasant surprise.

On the negative side, I did find the lead character, Rose, to be quite petty and childish at times. The writer tries to show how shallow and artificial society can be, but I would have enjoyed the story even without this element in it. I’m hoping that during the course of the other books in the series we get to see a more mature side to Rose. But, I also hope she retains her fun and spark throughout.

By the end of book 1, a plethora of questions remain unanswered and the political deceit deepens further. The ending has me rushing to get the next book in the series to find out more. Of course, I am also eager to read more of Rose and Dimitri.

The first book of Vampire Academy series has already been adapted into a movie Vampire Academy : Blood Sisters which released in 2014. The film was not too popular with the audience, but there is enough chemistry between the lead actors to make us wish for a continuation or at least a TV series.

RELATED | Five Reasons Vampire Academy Should Be a TV Show

Our romance-themed entertainment site is on a mission to help you find the best period dramas, romance movies, TV shows, and books. Other topics include Jane Austen, Classic Hollywood, TV Couples, Fairy Tales, Romantic Living, Romanticism, and more. We’re damsels not in distress fighting for the all-new optimistic Romantic Revolution. Join us and subscribe. For more information, see our About, Old-Fashioned Romance 101, Modern Romanticism 101, and Romantic Living 101.
Pin this article to read later! And make sure to follow us on Pinterest.
By Rhea Sinha on July 25th, 2015