Vampire Academy, the film that is, is getting a lot of bad buzz but I’m not sure critics are looking at the film objectively. Part gothic, part Mean Girls, part 80s brat pack movie (with Lea Thompson’s daughter even in the lead role), and mostly all Richelle Mead’s awesome YA book series, this is one entertaining film. Sure, I’ve read the books (which I love) but I was still hesitant about the movie. The advertising made the adaptation look just a little TOO much like a parody, with the romantic elements and female friendships barely even a focus in the trailers and TV spots (which makes me wonder if studios were participating in a little bit of devious sabotage).

I was sold on the romantic relationship and chemistry between Dimitri and Rose.

Thankfully, in reality, the film is NOT a parody though it does play with some excellent satire (this being directed by Mark Waters after all) and fabulously campy dialogue and even acting at times (Gabriel Byrne is AMAZING when he looks at his fangs in the mirror). But most importantly, this is a faithful adaptation of the books that knows when to become serious and when (since this is a romantic column) to actually concentrate on the romance. Sure, I had my own imaginings of Dimitri Belikov from the books and for the first half of the movie, I remained skeptical of the casting choice (the authentically Russian actor Danila Kozlovsky). Halfway through though? I was sold on the romantic relationship and chemistry between Dimitri and Rose. From the very beginning of the movie, they set up Dimitri as a guardian god and Danila certainly played this part well. When he takes down Rose (who had been in hiding from the school with her best friend Lissa) with one maneuver that sends her flying on her back, there was no question of his strength and power.

Here was someone to be reckoned with, someone who made a good match for the sassy and maybe a little too proud Rose Hathaway.

Once safely returned to school (and allowed back thanks to Lissa’s powers of compulsion), Dimitri becomes Rose’s personal instructor to help her become a guardian one day for her best friend, yet also royal princess. 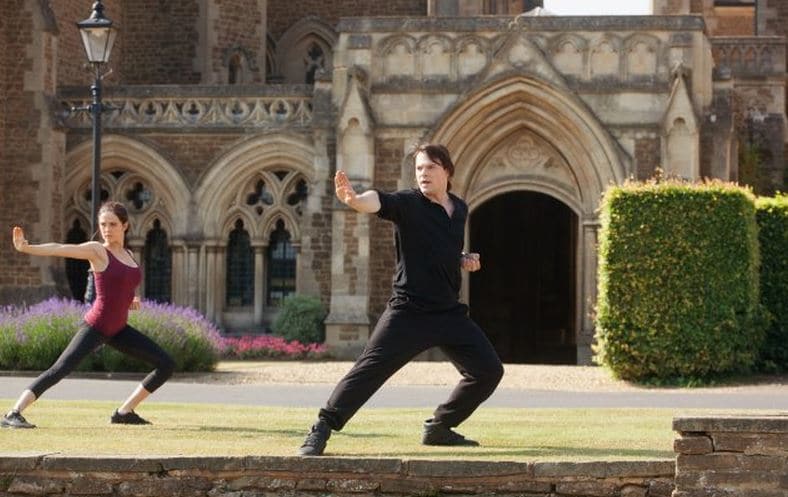 The training becomes more intense with each session, the chemistry and attraction clearly sizzling between the two, despite the forbidden aspect of the relationship. Rose is still in high school after all, while Dimitri is much older (24 in the books though in the film I think he is even older). Then there is the obvious buzzkill of the fact that the Dhampirs must always put the Morois first as their guardians; their lives secondary (which would have infuriated me personally). Still, the two can’t help but be drawn to one another, Rose clearly developing a huge crush and Dimitri so serious, not even being able to contain an occasional smile when around her.

Throughout the movie, there is also a mysterious threat against Lissa, one that reaches a climax during the school dance (and in consequence begins to build to my choice for most romantic moment in the film). Before the dance, Rose receives an expensive gift from Viktor (Gabriel Byrne) in the form of a necklace. She wears it to the dance; unaware that it had been charmed, creating a powerful love spell between her and Dimitri. When she arrives, they stare at each other across the floor.

After Lissa leaves the dance and is kidnapped by Viktor’s evil goons, Rose witnesses the attack through their special shadow kissed bond and goes for help. Only no one will help her. So what does she do? She finds Dimitri in his bedroom, but before they can go after Lissa and save her, the spell takes hold, so powerful in fact, that she can’t remember Lissa at all. They slowly come together, giving in to their intense attraction.

Dimitri, so aware of his actions even under a spell, soon realizes something is not right and rips the necklace off of Rose’s neck. Immediately, she remembers Lissa and they take off, though it’s now maybe a little awkward between the two. Together, with the help of Christian (Lissa’s boyfriend), they attempt a rescue and even seemingly pull it off; Viktor supposedly safely imprisoned below the school.

Of course, soon after, Dimitri doesn’t admit to his own attraction (despite his scream of horror when he thought Rose was about to be killed by one of those vicious hounds), claiming it was only the charmed necklace. But was that really the truth? The answer brings me to the romantic moment of the week that begins when Rose is invited to talk to Viktor about what it means to be Shadow Kissed.

During the conversation, he claims that the charm wouldn’t have worked unless there had already been a prior attraction. Dimitri did in fact have feelings for her, something Viktor worked out through his daughter Natalie that he used as a spy, divulging to the audience that Natalie wasn’t just Rose’s awkward friend but a duplicitous liar who had just killed to become one of the Strigoi (soulless vampire) and save her father from prison. A fight ensues, one Rose is losing (she hesitates to hurt who she thought was her friend) until Dimitri arrives to save her.

Together, they bring down both Viktor and Natalie (Dimitri giving the final death blow to Natalie with a silver stake), thus knocking out Rose in the process. This entire climactic scene as they battle for their own lives can’t help but also reveal Dimitri’s true feelings as he not only gives it his all to save Rose, but in the process showcases his own vulnerability.

“My Rose,” he says as he picks her up into his arms, the moment sweepingly romantic and the tone in Danila’s voice was just gorgeous (thank goodness they cast a true Russian). I think I fell even more in love with Rose and Dimitri in this powerful romantic scene.

Needless to say, Rose being Rose, doesn’t let her knowledge of Dimitri’s feelings go to waste as she confronts him at the end of the movie.  Yes, he confesses, he did lie about his feelings for Rose but he did it because they couldn’t be together. Why? (And I quote from the book although from memory I believe the line might have been the same). Because, he says: What could be more romantic than that? Hopefully, more people will give Vampire Academy a chance and see it while they still can. It would be wonderful to see more Rose and Dimitri on the big screen.

What did you think of Dimitri and Rose in the film adaptation? Love them as much as me? Let me know in the comments…

Read my list of  The Top 65 Paranormal Romances in Film, Literature, and Television

Our romance-themed entertainment site is on a mission to help you find the best period dramas, romance movies, TV shows, and books. Other topics include Jane Austen, Classic Hollywood, TV Couples, Fairy Tales, Romantic Living, Romanticism, and more. We’re damsels not in distress fighting for the all-new optimistic Romantic Revolution. Join us and subscribe. For more information, see our About, Old-Fashioned Romance 101, Modern Romanticism 101, and Romantic Living 101.
Pin this article to read later! And make sure to follow us on Pinterest.
By Autumn Topping on February 8th, 2014

5 thoughts on “Romantic Moment of the Week: Vampire Academy’s Dimitri and Rose”