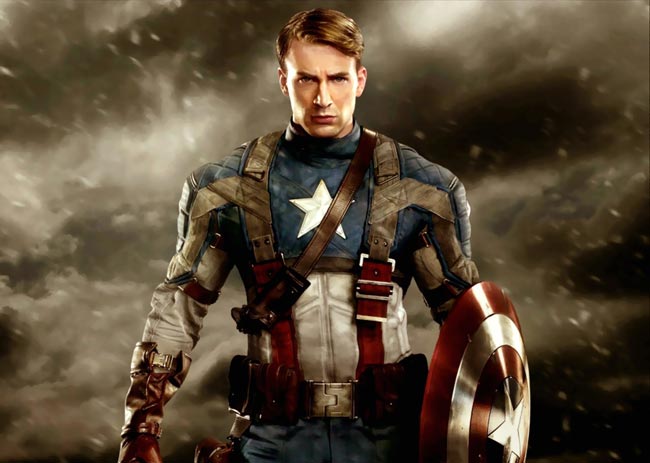 Captain America: The First Avenger was the last of the solo superhero films released by Marvel Studios before they released The Avengers. Released on July 22, 2011, the film was directed by Joe Johnston. He also directed Hidalgo, Jumanji, and The Rocketeer (among other films). The screenplay is by Christopher Markus and Stephen McFeely, the team behind the screenplays for all three movies in The Chronicles of Narnia, Thor: The Dark World, and Agent Carter.

One of the many things that I love about this movie is the way that they have managed to make viewers feel like they are in the 1940s. Joe Johnston and his team created authenticity. I appreciate that. The styles and hair, the settings, and the overall feel to the film were near perfect. (Or at least perfect enough that I could suspend disbelief.) As I watched, I felt like I was transported to a different time.

Warning! There may be spoilers here, so if you haven’t watched the first Captain America movie, proceed at your own risk…

Although the film follows Steve Rogers during the War, it opens a little after that, about 70 years after, to be exact. A team from SHIELD has uncovered a large plane in the ice. They’re investigating it when Agent Coulson sees Captain America’s shield. He realizes what they have found: that Steve is still alive. This gives the entire movie a bit of a bittersweet taste since we know from the very beginning how it’s going to end.

At this point, we backtrack to Steve Rogers, who is trying without success to enlist in the Army to fight during World War II. Unfortunately for him, he’s both tiny and a victim of many health problems. Steve’s reason to enlist is simple and highlighted as different: he wants to fight for his country, and, having faced his fair share of them, he hates bullies.

His many attempts to enlist end in failure; but finally, at Howard Stark’s “World Exposition of Tomorrow,” Dr. Erskine from the precursor to SHIELD offers him a chance to become a new type of soldier. This chance takes Steve to a military base, where he continues to be a stand-up guy who just wants to make a difference, fight for what is right and do so by thinking outside the box.

Steve is chosen to be injected with a serum that both enhances all of his good qualities and makes him super strong. He is supposed to be the first of many such soldiers, but the Nazi’s Scientific Division, called Hydra and lead by Johann Schmidt, gets there before that can happen. Hydra’s spy kills Dr. Erskine, leaving Steve the only super soldier. As the story unfolds, we learn that Schmidt was the first to be injected with the serum, using it before it was ready. There were some unfortunate side effects, the major one transforming him into Red Skull (from what I can tell, the skin on his face fell off and his bones were dyed red, hence Red Skull).

After the death of Erskine, the military is reluctant to let Steve serve in the Army. Determined to help in some way, he begins a job selling war bonds and playing a hero in films. While this is not what he enlisted to do, Steve feels like it’s better than nothing because it does inspire the American people and helps the War Effort.

While he’s performing in Italy, Steve learns that his best friend Sergeant James “Bucky” Barnes’ and most of his unit were captured by Hydra. Steve proceeds to enter enemy territory on his own to save his friend, as well as hundreds of others. His success makes him a legend. With the help of some of the rescued men, he forms the Howling Commandos and they proceed to ruin the plans of Red Skull and Hydra.

After a mission to capture Zola, Hydra’s lead scientist, results in the tragic death of Bucky, Steve blames himself and is now even more determined to stop Schmidt no matter the cost. With the stakes already so high, Steve concocts a daring plan that works beautifully, with one small hitch.

The hitch is this, Hydra is attempting to blow up every major city in the Allied countries. The plane has taken off and is flying too quickly to turn around. To save all the targeted civilians, something drastic has to be done. The best plan, it seems, is to crash the plane and, as is often the case in movies, the autopilot has been disabled.

Steve sees only one option and proceeds to lay down his life for his country and his city. This leads him to crash the ship in the ice. Before we see Steve meeting Nick Fury and other agents of SHIELD in modern-day New York, there is a montage of his friends and colleagues coping with his loss in their own ways after the War. 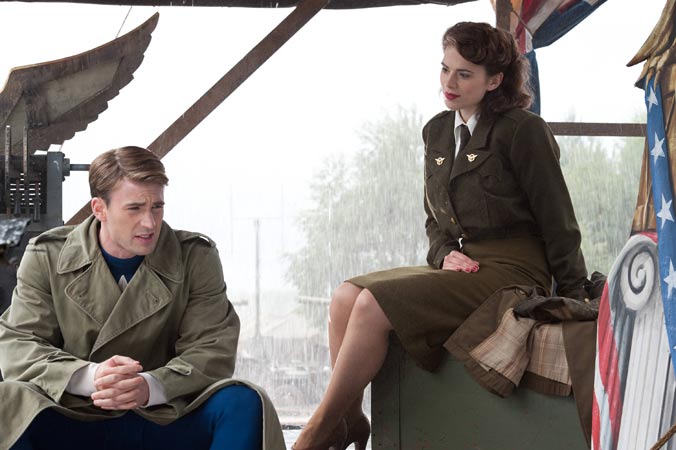 The romance in Captain America is bittersweet. Steve and Peggy both feel something for each other, but they are also involved in a war. This, of course, means that the romance takes a bit of a back-burner, which I really appreciated because of the context.

It makes sense that two people who take their jobs as seriously as Peggy and Steve do would try to not allow themselves to become distracted in a major way. They often talk about “when the War is over” and are jealous about each other, but it doesn’t actually seem to affect what they do for the most part.

There are signs of potential romance, as Peggy and Steve share many lingering glances and have multiple discussions, particularly about the importance of waiting for the right dance partner. This makes the romance sweet without overwhelming the main plot. 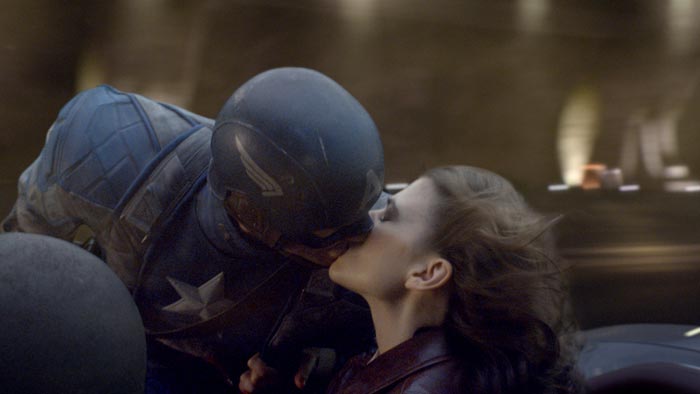 These subtle glances and the eventual kiss make the ending of the film less happy than I wanted it to be. There were several bittersweet moments toward the end of the film related to Steve and Peggy. One of these was when Colonial Phillips handed Peggy Steve’s now inactive file. She opened it up and saw the picture of pre-serum Steve, the Steve whose kindness and sense of fairness attracted her to him in the first place.

The other thing that catches me every time is Steve’s reaction to waking up 70 years later. After talking with Nick Fury, his first reaction isn’t fury, fear or a “so, who won the War?” No, the first emotion he shows is sadness. When asked why, he says that he had a date. He refers to one he and Peggy had set as he was crashing the plane. With that and his understandably depressed face, the credits roll.

Of course, Peggy is attracted to Steve Rogers (as are we all) and has faith in his abilities. Steve, for his part, feels the same way about Peggy. However, he puts his duty ahead of their possible relationship, as does she. I would be interested in an alternate timeline where they are able to date after the War. 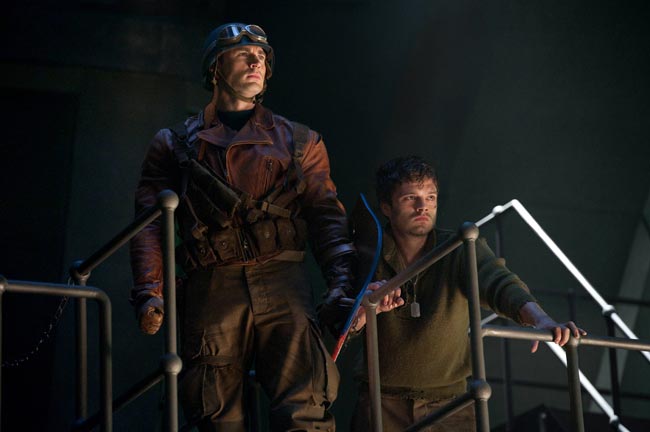 While Steve and Peggy make up the romance in the film, Bucky and Steve have a friendship that is also wonderful to watch unfold. The two were childhood best friends. Bucky is always saving Steve. For instance, when he insists on getting in fights with guys twice his size. Furthermore, he saves Bucky at the risk of being court-martialed. The affection goes both ways. Bucky wouldn’t leave Steve in the burning factory. He even took a hit that ended up pushing him off of a train to save Steve.

One of the best lines, in my opinion, comes from Bucky. When asked if he would follow Captain America into the jaws of death, he says that no, but he would follow the skinny guy from Brooklyn who was too dumb to walk away from a fight. They always had each other’s backs. Moreover, Bucky’s death is what tipped the scales, making Steve even more determined to destroy Hydra.

Captain America: The First Avenger was refreshing, in a sense, because it had a different feel to it than the other Avengers movies to that point. This helped make the film feel like it was a different time period than the other films, and the addition of characters like young Howard Stark assisted in that as well. The score was incredible and the actors, although I have not read the comics, seemed very well suited to their parts.

Captain America is one of my favorite superheroes. He’s an ordinary man who becomes extraordinary because of his compassion, his sense of justice, his conviction that all people matter and his belief on freedom (it isn’t always free), but it is worth the sacrifice. When asked “What makes you so special,” he responded with, “Nothing. I’m just a kid from Brooklyn.” He’s an all-around stand-up guy and a decent human being and this movie portrayed that, setting the stage for Steve to join the Avengers that we already knew.

Overall, this is one of the most satisfying superhero movies, or action movies, in general, that I have ever seen. The story is gripping, the stakes are real and the characters are human. The romance is bittersweet, but that only makes the story stronger. Sometimes, winning takes sacrifice, and I think that might be why Captain America is a favorite hero of many; he’s willing to take that step and put the needs of others ahead of himself.

Our romance-themed entertainment site is on a mission to help you find the best period dramas, romance movies, TV shows, and books. Other topics include Jane Austen, Classic Hollywood, TV Couples, Fairy Tales, Romantic Living, Romanticism, and more. We’re damsels not in distress fighting for the all-new optimistic Romantic Revolution. Join us and subscribe. For more information, see our About, Old-Fashioned Romance 101, Modern Romanticism 101, and Romantic Living 101.
Pin this article to read later! And make sure to follow us on Pinterest.
By Bailey Cavender on September 16th, 2015