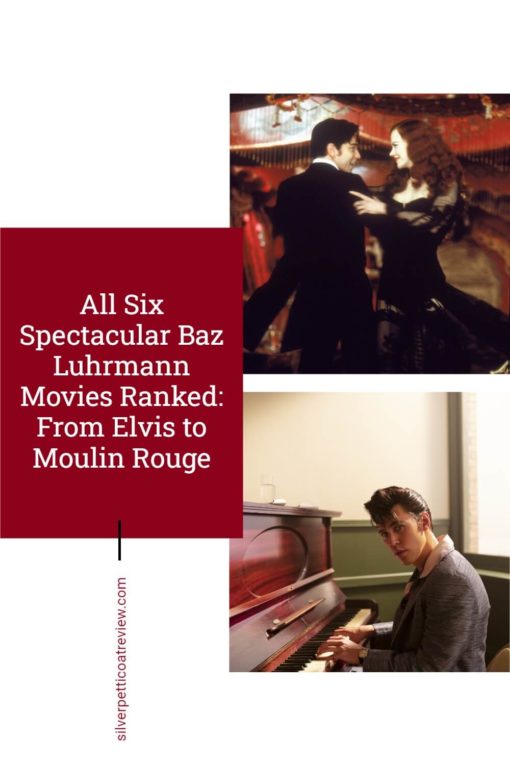 My love affair with Baz Luhrmann movies began when I saw Moulin Rouge in the theater during its initial release in 2001. I was so stunned by the film’s strangeness that I didn’t know what to think. But as I stood out in the movie theater hallway, my sister and I looked at each other, asking: “Well, what did you think?”

After a few moments of contemplation, we both answered simultaneously about how much we absolutely loved it: the romance, the tragedy, the Romanticism, and the artistic opulence of Luhrmann’s directing style. We were both sold!

From there, I went to see Moulin Rouge a couple more times while it was still in theaters. I bought the soundtrack and watched his previous films, Strictly Ballroom and Romeo + Juliet.

I previously watched Romeo + Juliet when I was really young – mostly because I loved Leo, but I didn’t appreciate it from a filmmaking perspective.

So, watching it again to enjoy a filmmaker created a new experience.

The Aussie writer and director, Luhrmann, takes his time between releasing new movies; hence why he’s only released six films (and one TV show – The Get Down) in thirty years.

RELATED: 15 Of The Best Jane Eyre Movies And Adaptations, Ranked

In an interview with Interview Magazine, Luhrmann explained why he has a slower process:

“Sometimes, I dream that it didn’t have to take me so many years. Why can’t I just be a shooter? I go out to the movies and it can be like fast food. I like good fast food as much as good banquet or good sushi. They’re as different as they come. And I think to myself, “Oh, look at X. He just bangs two out a year. Wouldn’t that be great?” The truth is that I can do other things but it ends up pulling itself back. It’s just not truthful.

That search for truth in his filmmaking draws me (and perhaps many others) to his strange but beautiful films. They might not be everyone’s cup of tea – and indeed, they’ve been hit or miss with the critics – but one can’t deny he has a signature style – making him an artist to appreciate.

With the release of his newest movie Elvis, I thought it would be the perfect time to explore all six of his feature films.

In some ways, ranking movies by Baz Luhrmann is impossible as they are all excellent, romantic, and unique. So, this comes down to personal preference, quality, and the mood of the moment.

Note: I included the “Where to Watch” sections, which are relevant to the time of publication (July 2022). If I update this post, I will let you know. Streaming availability is subject to change at any time.

Australia is a romantic, sweeping historical epic set in; you guessed it: Australia. When an Englishwoman, Lady Sarah Ashley (Nicole Kidman), inherits a ranch, she employs a cattle drover named “The Drover” (Hugh Jackman), a rugged Australian man, to help her drive more than 2000 cattle over dangerous lands.

Meanwhile, they befriend a young Aboriginal boy, Nullah, and Lady Sarah and Drover begin to fall in love – all while danger lurks around them – especially as WWII looms closer.

It’s all very romantic and epic, with swoony moments, adventurous scenes, gorgeous landscapes, and entertaining villains. The romance between Kidman and Jackman is particularly appealing – as they have fantastic chemistry.

It’s also a lovely tribute to Australia and its history.

At times, however, the movie feels like it meanders off the main story’s path. But it’s still a gorgeous Baz Luhrmann film that fans of epic romances should enjoy.

And good news, Baz Luhrmann just announced this year that he plans to expand Australia into a six-part limited series using unaired footage titled Faraway Downs. It will also have a new ending and soundtrack.

Where to Watch: Stream on HBO Max or rent/buy on Digital and DVD.

Baz Luhrmann’s modern adaptation of William Shakespeare’s Romeo and Juliet has become iconic since its ’90s release. Leonardo Dicaprio and Claire Danes star as the tragic lovers, Romeo and Juliet, in what is arguably the best film version of the play (perhaps tied with Zeffirelli’s beautiful 1968 film.)

The creative decision to use Shakespeare’s dialogue and set it in a contemporary setting was a unique but effective choice.

The costumes, the performances, the visual aesthetic and art direction, the strange punk influence, the chemistry between the leads, the modern day setting, and the haunting soundtrack (who can forget “Kissing You” by Des’ree?).

And let’s not forget the brilliant, underrated performance of Harold Perrineau as Mercutio.

Ultimately, this Romeo + Juliet is visual poetry that both stays close to the source material and transforms it.

Where to Watch: Stream on HBO Max or rent/buy on Digital and DVD.

The Great Gatsby is a polarizing adaptation of F. Scott Fitzgerald’s classic novel – perhaps due to Luhrmann’s sparkling, dazzling style of excess. But it’s this excess that I think makes the movie work – bringing out the novel’s themes to a contemporary audience.

Set in the 1920s, The Great Gatsby follows Nick Carraway, a writer who finds himself drawn into the mystery of the millionaire Jay Gatsby – a man with a secret past hoping to reunite with his former love, Daisy.

Besides the stunning costumes, fantastic production design, and incredible performances, Dicaprio steals what is a beautiful movie. His emotional, layered performance is one of his best. Indeed, he and Luhrmann make a good team.

Ultimately, the Baz Luhrmann movie has his distinct artistry and frenzied style – but what he does exceptionally well is controlling his chaos. The Great Gatsby is madness with a message.

Where to Watch: Stream on HBO Max or Cinemax. You can also rent/buy it on Digital and DVD.

Austin Butler and Tom Hanks star in this mesmerizing biopic focused on Elvis, the King of Rock and Roll, and his relationship with his controversial manager, Colonel Tom Parker. The new movie follows Elvis Presley from his childhood to his passing, with Parker (the film’s villain) narrating.

It’s also about America’s loss of innocence, with Elvis as the vehicle to present this theme.

But what makes this musical film stand out is Austin Butler’s uncanny performance as Elvis (even singing some of the songs himself), perfectly capturing his essence.

While not part of the Red Curtain Trilogy, Elvis feels like it fits into the style of his first three films, showcasing everything fans love about Baz Luhrmann movies.

This is extravagance at Luhrmann’s best. Elvis, also an extravagant artist, perfectly fits into Luhrmann’s style.

Elvis and Baz Lurhmann are a match made in movie heaven.

Where to Watch: See the movie in theaters. However, it will likely be available to stream on HBO Max sometime in August.

The first of Baz Luhrmann’s theater-motif films (and his directorial debut) is also one of his best movies.

The romantic comedy about an eccentric, non-conforming ballroom dancer, Scott Hastings (Paul Mercurio), who partners with a plain-Jane beginner dancer, Fran (Tara Morice), who is willing to dance in his unusual style – leads to romance.

It’s a little bit like Dirty Dancing – but not.

Strictly Ballroom is not the film you might expect. What sounds like a formulaic romantic dance film between a ballroom dance teacher and a student is much more. It’s individualistic, genuinely funny, authentically romantic, parodic, rebellious, and one of the best dance films ever made.

While this movie is probably the least known in Luhrmann’s filmography, it’s a visual feast everyone should see.

Where to Watch: Stream on Hoopla, Pluto TV, and Fubo TV. You can also rent/buy it on Digital and DVD.

Moulin Rouge! is spectacular from start to finish – an inventive celebration of truth, beauty, freedom, and love – everything Baz Luhrmann movies represent.

When Christian (Ewan McGregor), an aspiring young and naïve writer, moves to Paris, he falls in love with the courtesan Satine (Nicole Kidman) in a story that ultimately leads to tragedy.

The jukebox musical has catchy tunes (including one original song), memorable performances, a swoony love story, an epic climax, flashy set designs, costumes, and so much more.

It even received an Oscar Nomination for Best Picture. And while it didn’t win that award, the film did take away two Oscars for Best Art Direction-Set Decoration and Best Costume Design.

RELATED: ‘Moulin Rouge!’ Review: This Is A Flashy And Fun New Broadway Musical

Moulin Rouge is the movie you watch if you want to feel all the emotions while watching filmmaking artistry.

Sure, like all movies by Baz Luhrmann, it’s not to everyone’s taste. But even if you don’t love his style, perhaps you can still appreciate his artistry; at least he has something unique to say.

Where to Watch: Stream on STARZ or rent/buy on Digital and DVD.

How would you rank Baz Luhrmann movies? Do you have a favorite? Sound off in the comments below!