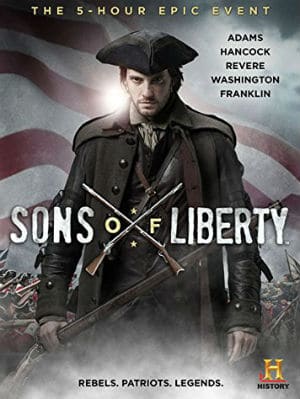 I suppose I should start this off with a bit of a disclaimer. I am a historian. When a historian sees a miniseries that has premiered on the History Channel, there is a bit of skepticism that immediately hits them, because, you see, for historically accurate content, you go to PBS, and, sometimes HBO or AMC. You almost never go to the History Channel, what with its Ancient Aliens and Ice Truckers.

Therefore, I started to watch Sons of Liberty with a bit of concern and was, to my amazement, pleasantly surprised. Maybe because I wasn’t expecting it to be a wonderfully historically accurate piece, I was less disappointed when it wasn’t? However, it was more accurate than I had expected (and I’m taking a class on the American Revolution right now, so I’m very familiar with the history).

Released on January 25th, 2015, Sons of Liberty is made up of three episodes and runs about five hours. It ran on the History Channel in the US and was produced by Stephen David Entertainment and Stillking Films. My DVD copy gives additional credit to Lionsgate and A&E Studios. This series also ran in the Netherlands, the UK, and Australia, so it had a decently wide reach.

Watching the special features, I really appreciated the amount of research that the actors all did to become their characters, as it does come across. Hancock was a gentlemen smuggler, and his reasons for joining the cause are different than those of Sam Adams, who (at least in the series) was all about the liberty aspect.

Hancock’s struggles emphasize the economic portion of the Revolution, which was a major component of the desire for independence. Sam Adams, John Hancock, Joseph Warren, and Paul Revere really were a much bigger part of the Revolution than I learned in school, and it was nice to see them be such a large part of the series.

Another thing that Sons of Liberty touches on is that the colonists were not united for independence, as we tend to learn in school. When John Hancock, Sam Adams, and John Adams attend a meeting of the representatives of the other colonies, there were several references to “This is Boston’s war,” and “Let Massachusetts deal with it, this isn’t New Jersey’s fight,” which showcases the lack of unity among the colonies before statehood.

At first, the colonies were just after equal rights as British citizens, and when it became clear that Parliament didn’t view them as citizens, that was when forming a separate nation became very appealing. Initially, there was a push by the elites to become more like Scotland; part of the Empire and still British, but with more rights than colonists. This can be seen in the way that Gage deals with the citizens of Boston, particularly in his conversation with John Adams.

Sons of Liberty is also interesting to watch in that the streets of Boston were very dangerous historically and in the show. The North and South End Gangs were often fighting, but in 1765 there was an uneasy truce between the two, and they had begun to turn on Andrew Oliver, who was a royal official that was in charge of distributing the stamp for the Stamp Act. However, the Sons of Liberty were not actually part of the mobs; they were artisans and gentlemen who just happened to incite the mob to revolt.

At the risk of this turning into a “gosh, that’s not how it happened!” rant, I just want to mention a few other historical details that were changed in the series. Some of the same events happen in history that happens in Sons of Liberty, but there are some changes. The series did, for the most part, address those changes.

The Sons of Liberty and the British officials both ordered their men to stand down and show restraint, because, in 1765, Boston was a powder keg. I appreciated that Sons of Liberty took pains to show that. This was seen in one of my favorite lines in the series, which takes place before the governor’s house is destroyed. They tell him to go because there’s a large mob, and he responds that “This is Boston. There’s always a mob.”

The Boston Tea Party is also portrayed differently. To give a brief historical background, there had been a protest and boycott against drinking tea, because of the tax on it. Since the East India Company was losing money, they sent several ships to the colonies to offload the tea (which they were selling for a cheaper price). Because it was more about the principle, the tea never reached the harbors of New York, Philadelphia, or Charleston, but Governor Hutchinson refused to let the ships leave.

The Bostonians refused to let the ships unload, and this calls into effect a series of laws that state that cargo has to be offloaded within 20 days, or be sold at auction. It becomes a game of chicken, until, on the 19th day, Sam Adams holds a meeting where he tries to convince Hutchinson to send the tea back to England.

When this doesn’t work, small groups of the Sons of Liberty sneak on the ship in the dead of night and drop all the tea in the harbor. There is no conflict and the captain and crew just let them do it, and it was an organized political statement. Plus, no one could actually confirm who was involved (though everyone was pretty sure they knew who did it). In the show, this was a very public protest and the governor knew exactly who was involved.

Basically, they took historical events that happened in Boston (and some from the rest of the colonies) before the Revolution and squashed it all together, sometimes out of order. The casting of younger actors like Ben Barnes, Rafe Spall, Henry Thomas, Ryan Eggold, and Michael Raymond-James was a deliberate attempt to draw our minds to the 1760s, and not the portraits of the Founding Fathers that we see today, where these men are older and more distinguished. It was a radical notion, the forming of our country, and I think that was what they wanted to portray.

If you’re looking for a historically accurate account of the events leading up to the American Revolution, this is not that series. While the behind the scenes footage shows that the team behind Sons of Liberty were trying to take a different spin on the Revolution, putting the Founding Fathers into the 1760s, director Kari Skogland said it well; it has “authenticity, but not accuracy,” and is able to maintain the spirit of the historical event, if not the accuracy of it.

I think of Sons of Liberty as more of an alternative history, since, again, it’s not technically accurate. It takes the characters we have heard about in school, puts them back in their younger years, and lets us see what happened. It’s beautifully and realistically shot, and the score is also wonderful.

If you go into Sons of Liberty expecting an exciting movie based on Boston before the American Revolution and the signing of the Declaration of Independence, you will not be disappointed. Just don’t expect it to follow historical events to the letter because it won’t (and that can be okay sometimes).

Many of these men and the time before the Revolution aren’t talked about as much as the Revolution itself, and that is a real shame. Hopefully, watching Sons of Liberty will inspire people to dig into our country’s past and learn more about the real story, the way Merlin encouraged people to look into Arthurian Legends, and Sherlock got people excited about Sherlock Holmes all over again.

Content Warning: Sons of Liberty is a war movie and is violent. There’s also some language to be aware of (which raises the question, would John Adams actually swear?). There are also some moments of adult content, so be aware of that if you watch it.

Our romance-themed entertainment site is on a mission to help you find the best period dramas, romance movies, TV shows, and books. Other topics include Jane Austen, Classic Hollywood, TV Couples, Fairy Tales, Romantic Living, Romanticism, and more. We’re damsels not in distress fighting for the all-new optimistic Romantic Revolution. Join us and subscribe. For more information, see our About, Old-Fashioned Romance 101, Modern Romanticism 101, and Romantic Living 101.
Pin this article to read later! And make sure to follow us on Pinterest.
By Bailey Cavender on February 16th, 2016