In Mr. Smith Goes to Washington, a state senator dies unexpectedly. Suddenly, Jefferson Smith gets plucked from obscurity to replace him by special appointment of the governor. The governor’s political backer Jim Taylor is initially upset about the appointment. But Governor Hopper assures him that Smith will not only be well received by the constituents but naïve enough to keep his nose out of Taylor’s graft scheme. 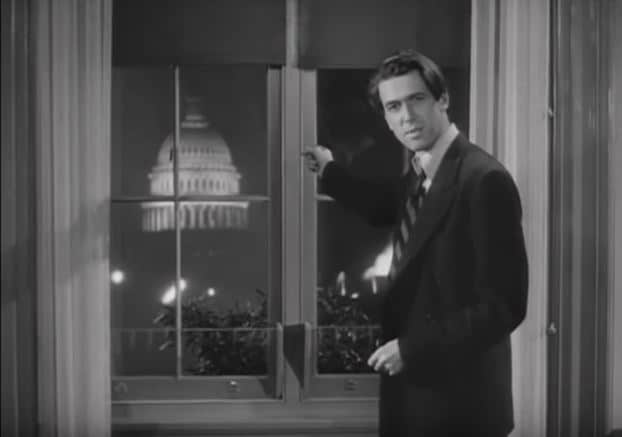 Jeff feels honored and humbled by his surprise appointment. Furthermore, he expresses his awe that he will be working along with his father’s old friend Senator Joseph Paine. Paine has been the shining example of character and integrity Jeff has looked up to all his life.

However, upon arrival in Washington D.C., it is clear that Jeff Smith is out of his depths. While he is caught up in innocent wonder over his new position and the historical sights, behind his back people are laughing at him. Even his new secretary Saunders scoffs at his naivete.

I-I-I don’t think I’ve ever been so thrilled in my whole life. And that Lincoln Memorial! Gee whiz. That Mr. Lincoln, there he is. He’s just lookin’ right straight at you as you come right up those steps. Just – just sitting there, like he was waiting for somebody to come along.

At the urging of his mentor, Senator Paine, Jeff introduces a bill to create a national boys camp in his home state. Little does he know that this will pit him against the all-powerful Taylor political machine which has earmarked the same land for a graft scheme. Thanks to a well-organized smear campaign and a shocking betrayal, Jeff learns a quick but painful lesson about how government really works.

RELATED |VINTAGE FILM REVIEW: LIGHT IN THE PIAZZA (1962) – THE STORY OF A MOTHER’S LOVE

But Jeff’s honest ideals and sincerity have rubbed off on his jaded secretary Clarissa Saunders. She challenges him to stand up for his beliefs in liberty, democracy, and human kindness. With the odds stacked against him, Jeff takes on political corruption in this epic David and Goliath battle. 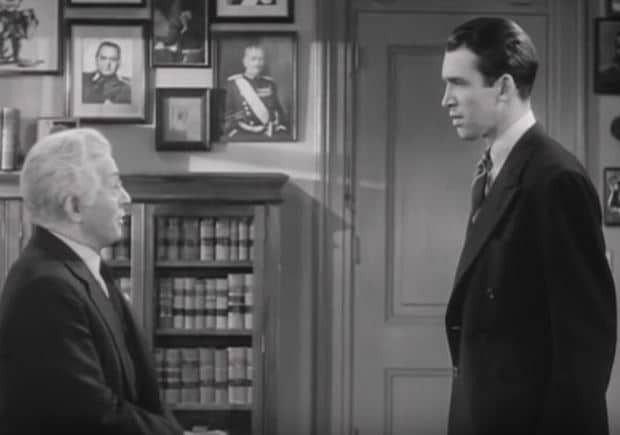 I suppose, Mr. Paine, when a fellow bucks up against a big organization like that, that one man by himself can’t get very far, can he?

I give you fair warning. There is no way I can be objective about Mr. Smith Goes to Washington. Not only is it one of my favorite films, but it packs a strong emotional wallop that deeply resonates with me.

Director Frank Capra has often had his films derided as Capra-corn. Generally, his films feature a naïve, salt of the earth character whose belief in the innate goodness of man eventually wins over even the hardest hearts. But that hope and positivity are exactly what I love about his films. Capra was a Sicilian immigrant whose love for his adopted country shines brightly in the patriotic Mr. Smith Goes to Washington.

James Stewart plays Capra’s endearing hero. Stewart is perfect for the role of Jefferson Smith. He plays him with earnest sincerity gradually transitioning to self-pitying disillusionment. Moreover, the script provides some great speeches for homespun hero Jefferson Smith, which perfectly fits Stewart’s onscreen persona. I find myself teary-eyed up every time I hear Jeff Smith speak about the value of democracy and his love of America.

Whether praising the values of human decency and personal liberty or expounding about the necessity of government integrity and the importance of fighting for lost causes, Stewart is not only credible but inspiring. Even after personal betrayal, he remains humble, respectful and willing to sacrifice himself for the greater good. Many have rated this as James Stewart’s best performance. His work as Jefferson Smith garnered an Oscar nomination.

Just get up off the ground, that’s all I ask. Get up there with that lady that’s up on top of this Capitol dome, that lady that stands for liberty. Take a look at this country through her eyes if you really want to see something. And you won’t just see scenery; you’ll see the whole parade of what Man’s carved out for himself, after centuries of fighting. Fighting for something better than just jungle law, fighting so’s he can stand on his own two feet, free and decent, like he was created, no matter what his race, color, or creed. That’s what you’d see. There’s no place out there for graft, or greed, or lies, or compromise with human liberties. 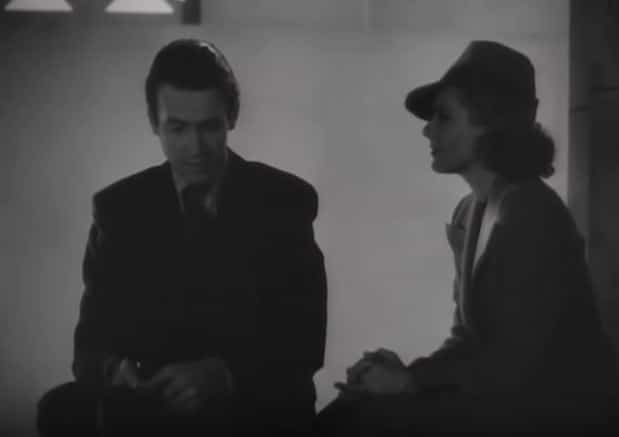 Mr. Smith Goes to Washington was Jean Arthur’s third and final collaboration with Capra and her second with Stewart. Her portrayal of Clarissa Saunders is the perfect contrast to Jeff Smith. Whereas he begins the film wide-eyed and innocent, Saunders starts out jaded and cynical. She’s well aware of the way the political game is played and is willing to play along if it pays well enough. However, underneath that skeptical veneer is a woman yearning for someone to prove her wrong. Jeff’s hopeful optimism rubs off on her. When he hits rock bottom, she is there to instill courage and hope. Suddenly, she goes from a participant in the political game to actively fighting with Jeff to expose the truth. Even though Clarissa doesn’t begin the film as a hero, she ends it as one.

You had faith in something bigger than that. You had plain, decent, everyday, common rightness, and this country could use some of that. Yeah, so could the whole cockeyed world, a lot of it. Remember the first day you got here? Remember what you said about Mr. Lincoln? You said he was sitting up there, waiting for someone to come along. You were right. He was waiting for a man who could see his job and sail into it, that’s what he was waiting for. A man who could tear into the Taylors and root them out into the open. I think he was waiting for you, Jeff. He knows you can do it, so do I.

Along with Stewart and Arthur, Mr. Smith Goes to Washington is blessed with a great cast of supporting actors. Claude Rains plays the seemingly upright, but secretly compromised Senator Paine for which he garnered an Oscar nomination. Edward Arnold takes a familiar role as the wealthy, powerful and morally corrupt Jim Taylor. Then there is Thomas Mitchell as Saunders reporter friend Diz Moore. Mitchell appeared in several other famous films the same year, including Gone With the Wind. Rounding out this talented cast are popular character actors Guy Kibbee, Eugene Pallette, Beulah Bondi (who also appeared with Stewart in It’s a Wonderful Life), H.B. Warner, Harry Carey and Grant Mitchell. 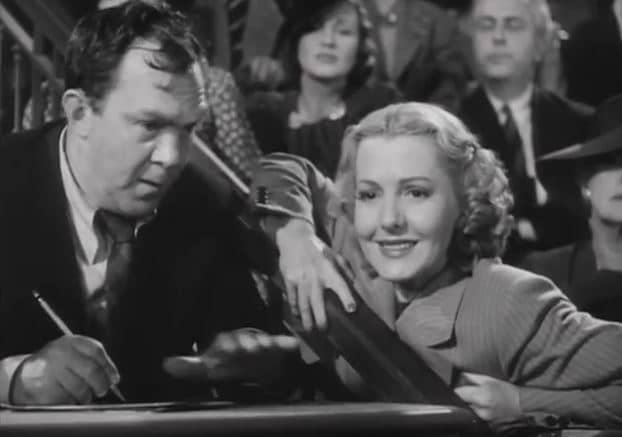 Though I love this movie for its big scenes and bigger message, there are also some smaller moments which really add to the film. Watch Harry Carey in a small role as the President of the Senate. His reactions to Jeff Smith are quiet comedy gold. Additionally, there is a trio of brief scenes which confer dignity to its’ African American characters.  This is a nice surprise since this was uncommon at the time.

RELATED: My Journey Into Old Movies: It’s a Wonderful Life

Overall, I believe Mr. Smith Goes to Washington should be required viewing by all Americans. It is a great mix of both cynicism and optimism on how American democracy works. Above all, it conveys a great sense of patriotic hope and pride despite the inescapable flaws of the system. The message that one person can make a difference is one of which we all need to be reminded. I dare you to watch this movie and not come away inspired, proud and challenged.

Fun Fact: Unable to film in the actual Senate Chambers, Capra had them replicated down to the smallest detail for the Mr. Smith Goes to Washington.

Where to Watch: Purchase on DVD or iTunes.

What are your thoughts on Mr. Smith Goes To Washington? Sound off on this classic film below…

Our romance-themed entertainment site is on a mission to help you find the best period dramas, romance movies, TV shows, and books. Other topics include Jane Austen, Classic Hollywood, TV Couples, Fairy Tales, Romantic Living, Romanticism, and more. We’re damsels not in distress fighting for the all-new optimistic Romantic Revolution. Join us and subscribe. For more information, see our About, Old-Fashioned Romance 101, Modern Romanticism 101, and Romantic Living 101.
By Brittaney B. on January 11th, 2018