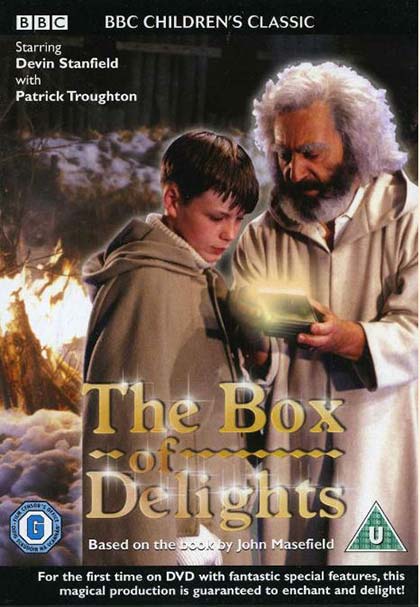 The Box of Delights Review

Mention The Box of Delights to British adults of a certain age (myself included) and you will be met with a flood of nostalgia about magical and scary Sunday afternoon TV. From the very keen, you might even get words and phrases like, “scrobbled,” “the purple pim,” and of course, “The wolves are running.”

The BBC adaptation of John Masefield’s 1935 children’s novel first aired in the run-up to Christmas 1984.  It featured a cast including the second Doctor (Doctor Who) Patrick Troughton as the enigmatic Punch-and-Judy man Cole Hawlings, and Shakespearian actor, ex-husband of Maggie Smith and father of Toby Stephens, Sir Robert Stephens, as the villain Abner Brown.

Over six episodes, it tells the story of young Kay Harker, who is given a magical box to protect by a travelling Punch-and-Judy man. This is the Box of Delights.  It can make you go small, it can make you go swift, and it is full of wonders. Kay soon discovers that the box is sought by the villainous Abner Brown, whose headquarters is disguised as a theological college and whose henchmen are disguised as curates. Abner will stop at nothing, including kidnapping the entire staff of Tatchester Cathedral (choirboys included) to get his hands on the Box.

The Box of Delights is a strange and quirky tale. (The book is even stranger). I think one of the reasons we loved it as children is that it never talks down to us or tries to cushion us from danger. Among its odd characters are Herne the Hunter, pistol-wielding schoolgirl Maria Jones, “The Boy” – an oracle who lives under a waterfall, and a gang of pirate rats. There are cars that turn into aeroplanes, and lions and unicorns pulling sleighs. And yet, it’s never silly.

It’s serious fantasy, and our enjoyment comes from taking it seriously and experiencing Kay’s fear for ourselves. Many a child has leapt behind the sofa over the years at the sight of that wolf’s head rushing towards them. As adults, perhaps the most disturbing thing is the apparent lack of childcare. When children are kidnapped, it’s left to children themselves to sort it out, as the local police inspector is more interested in rabbits and card tricks. But the idea of children who don’t need adults is a mainstay of children’s literature. It’s what we all dream about when we’re young. And we know that, as long as Kay has the magic Box to protect him, things will be all right.

And it’s such a Christmassy story. Not in a glitzy way, but in an old-fashioned way, mingling pagan and Christian aspects of the season seamlessly. So there are carols, clergymen and cathedrals, but also Roman encampments, Celtic deities, and the magic of bird and beast. All mixed together and turned out like the perfect Christmas pudding.

Nowadays, the special effects in The Box of Delights may not seem very special. Most of the magic is achieved with 2D animation, actors in furry costumes, and superimposed images. But does that matter? For aficionados, the old-fashioned effects add to its charm. We know the world of the Box is magic because it doesn’t look real. Also, the slightly dated quality of the picture and direction adds to its authenticity as a period piece. Because, let’s face it, the 1980s are now as much history as the 1930s.

And let’s not forget the theme music, John Hely-Hutchinson’s Carol Symphony. Just the sound of that twinkling introduction is enough to put a shiver down your spine.

Our romance-themed entertainment site is on a mission to help you find the best period dramas, romance movies, TV shows, and books. Other topics include Jane Austen, Classic Hollywood, TV Couples, Fairy Tales, Romantic Living, Romanticism, and more. We’re damsels not in distress fighting for the all-new optimistic Romantic Revolution. Join us and subscribe. For more information, see our About, Old-Fashioned Romance 101, Modern Romanticism 101, and Romantic Living 101.
Pin this article to read later! And make sure to follow us on Pinterest.
By Elizabeth Hopkinson on December 23rd, 2015

1 thought on “The Box of Delights – A Christmas Classic”