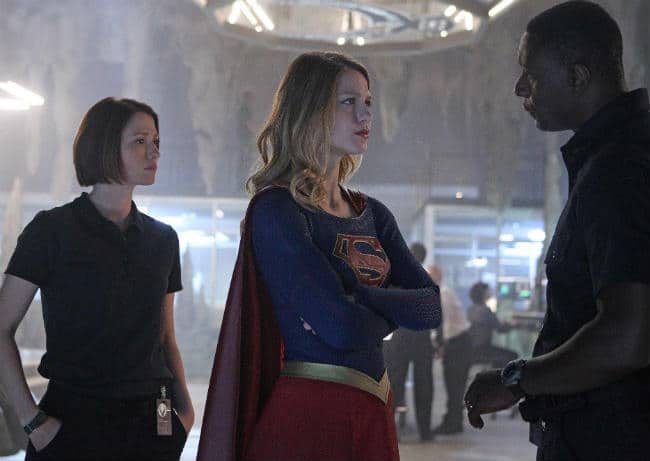 Supergirl premiered on CBS last night after a lot of hype and promotion. So, did it live up to all the marketing? In short, I think it did. While there are some definite kinks to work out (I’m not sure I can handle the alien criminal of the week), overall it was a refreshingly female perspective on the whole superhero genre. If you were to take The Flash and Arrow and then combine it with Torchwood (trust me) and The Devil Wears Prada, you would probably find Supergirl.

Supergirl tells the story of Kara Danvers (Or Kara Zor-El), Superman’s cousin who is sent at the same time to Earth when Krypton is destroyed. She’s directed by her parents to work as Superman’s protector. But something goes wrong. She’s sent off course only to land in the Phantom Zone, where time does not pass. 24 years later, Superman rescues her and brings her to live with an adopted family. In a nice nod to the past, Kara’s adopted parents are played by Helen Slater (Supergirl from the ‘80s film) and Dean Cain (Superman from the hit ‘90s series Lois and Clark).

Kara grows up keeping her powers to herself while also looking up to and idolizing “Superman” from a distance. It turns out her mission wasn’t needed anymore, so now she has to find a new one. 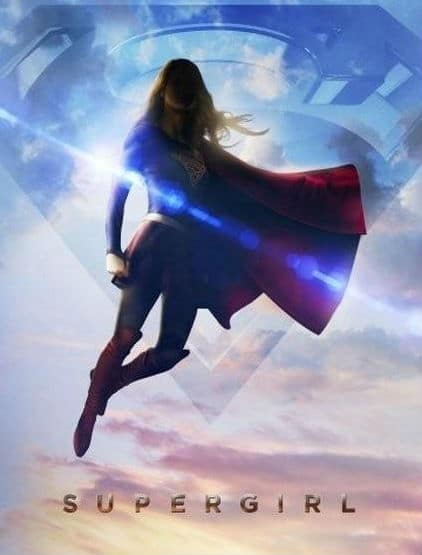 Now all grown up, she lives in the big city (completely separate from Metropolis of course) and works at a newspaper (in many ways, Kara’s story parallels Clark’s). Kara’s always kept to herself until a disaster with a family member forces her to shed her fears and embrace who she is – a hero.

Without giving too much away, there’s also a fresh underground element to the series – a group fighting bad aliens. Hence, my Torchwood comparison. It really is a lot like that and should work as a really cool addition to the series.

Melissa Benoist as Kara is perfect for the role and will no doubt have the audience rooting for her instantly. She’s awkward but smart; heroic but afraid. She’s flawed and layered while also being a believable hero. Benoist brings a lot of wit to the character and gives a rather endearing performance.

I was particularly entertained by Calista Flockhart as Cat Grant – Supergirl’s version of Perry White. In fact, everything’s been given a female twist. The family member who inspires Kara is her sister. Her boss is a woman. She has a best friend sidekick who is the opposite sex (and also has a crush on her). And spoilers… her nemesis, the “General” is not Zod, but a woman. There were many reminders sprinkled throughout that this is a female-driven show and proud of it. A little too on the nose? Perhaps. But I surprisingly didn’t mind. Cat Grant’s meta defense of “supergirl” was a nice touch.

As far as romance goes, I’m not sure if I buy Kara with “James” Olsen (not that anything’s happened yet, but this feels like the main romance). While I like his fresh take on the character, I admit to still having a little bit of a bad taste in my mouth with what Smallville did with the Jimmy Olsen character. Kara and James remind me a little too much of Chloe and Jimmy which was one of the worst pairings in television history. And yes, I’m not backing down on that opinion! Still, Kara and James as a pair might win me over as long as it stays far, far away from any Smallville similarities. Don’t get me wrong, I loved Smallville (we had a bit of a rocky relationship if I’m being honest), but I was more of a Chloe/Clark; Chloe/Davis; Chloe/Oliver fan.

I’d also like to point out the similarities to Kara to both Chloe Sullivan and Felicity Smoak. Somehow, I feel like Kara as the lead was inspired by these two female characters – especially Felicity. Arguably, two of the creators of the series – who also write for The Flash and Arrow thought it would be fun to make the lead character a bit Felicity like. She dresses like her, kind of talks like her in an awkwardly endearing way and even looks a little bit like her. So, I wouldn’t be surprised if the popularity of Felicity (and how much fun I’m sure it is to write her) helped inspire this particular interpretation of Supergirl.

Overall, while there are perhaps too many winks at the comic book, film and TV mythologies that have come before, Supergirl is off to a promising start. You can catch the pilot online if you missed it. Supergirl airs on Monday nights at 8/7c.

Did you watch Supergirl? What were your thoughts on the premiere episode? Let me know in the comments.

Our romance-themed entertainment site is on a mission to help you find the best period dramas, romance movies, TV shows, and books. Other topics include Jane Austen, Classic Hollywood, TV Couples, Fairy Tales, Romantic Living, Romanticism, and more. We’re damsels not in distress fighting for the all-new optimistic Romantic Revolution. Join us and subscribe. For more information, see our About, Old-Fashioned Romance 101, Modern Romanticism 101, and Romantic Living 101.
Pin this article to read later! And make sure to follow us on Pinterest.
By Amber Topping on October 27th, 2015