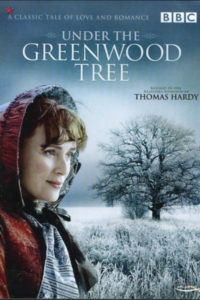 Under the Greenwood Tree is a light-hearted and, at times, rather humorous adaptation of Thomas Hardy’s novel of the same name from 1872. But here be no tragedy, no debasement, no ruination, no cruelty, no subterfuge. I know, I know, it doesn’t sound like Thomas Hardy at all, but it is! Here be, rather, a somewhat straightforward love story, a coming-of-age tale of a young, beautiful schoolteacher, who must choose her future companion. Yes, it’s the traditional marriage plot. And there are many eligible and worthy suitors sniffing around.

Under the Greenwood Tree is something of a loose adaptation of the book, produced by Ecosse Films and first shown in the UK on ITV during the Christmas season in 2005. The film is beautifully filmed, full of Hardy-esque, folkloric details – dancing, music, songs, cider-making, cider-drinking, calendrical celebrations, work rhythms, and on it goes. There are lots of scenic venues, beautiful costumes, and there is a great cast, including Keeley Hawes (no stranger to period pieces), Ben Miles, James Murray and Steve Pemberton.

The Adoration of Miss Fancy Day

The beautiful, new schoolteacher, Miss Fancy Day (Keeley Hawes), arrives in the village of Mellstock on Christmas Eve. Her ailing father lives as a gamekeeper on a neighboring estate, so she has come to this rural locale, following the completion of her education, to teach, to keep an eye on her father and to play the new harmonium, the organ, at the local church.

Carolers – members of the all-male church choir – call upon her that Christmas Eve, and the young, beautiful caroler, son of the local carrier (the village’s transportation man), is smitten from first sight. His name is Dick Dewy (James Murray). He’s uneducated, working-class, virility personified, guileless and wearing his heart on his sleeve. The vicar, Mr. Maybold (Ben Miles), also takes a shine to this newcomer. He is propriety and properness itself, educated, ambitious, handsome. And then, there’s Mr. Shinar, an older, wealthy landowner, who’s offering security and position, as only money can provide. 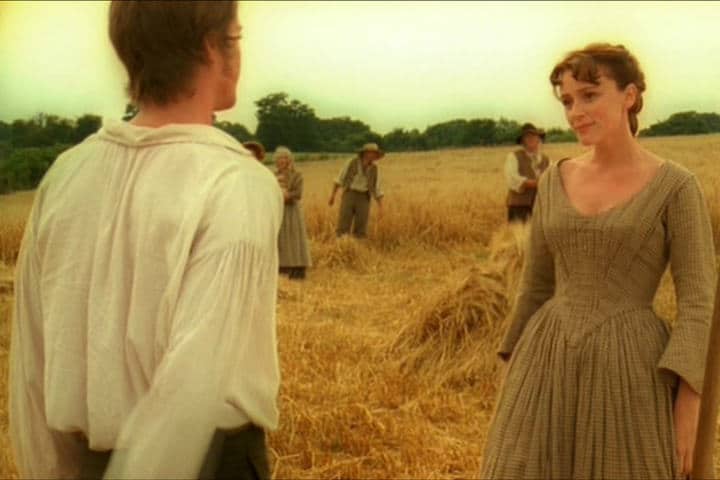 Making up Her Mind and Choosing Her Place

These are Miss Fancy Day’s suitors, and she must make up her mind, must choose. She must choose her place in the world and what she wants and who she wants. Her father demands that she marry into wealth, wanting to spare her the work-a-day sorrows and struggles of the poor, working class. She speaks French and Italian, dreams of traveling and exploring the world, and the ambitious Mr. Maybold can deliver on these dreams. 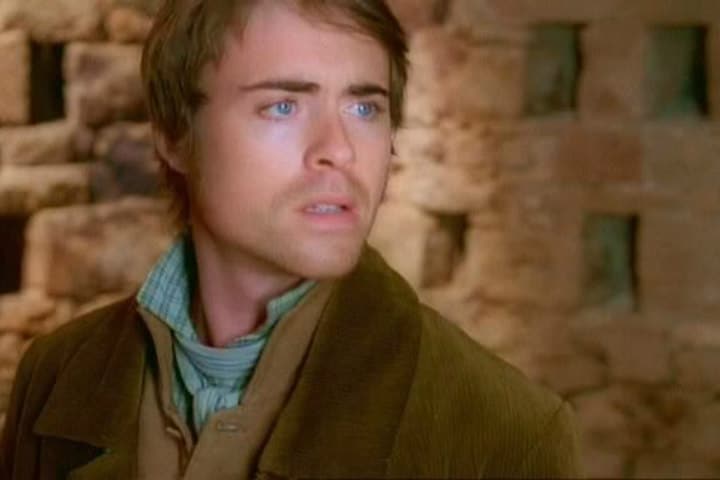 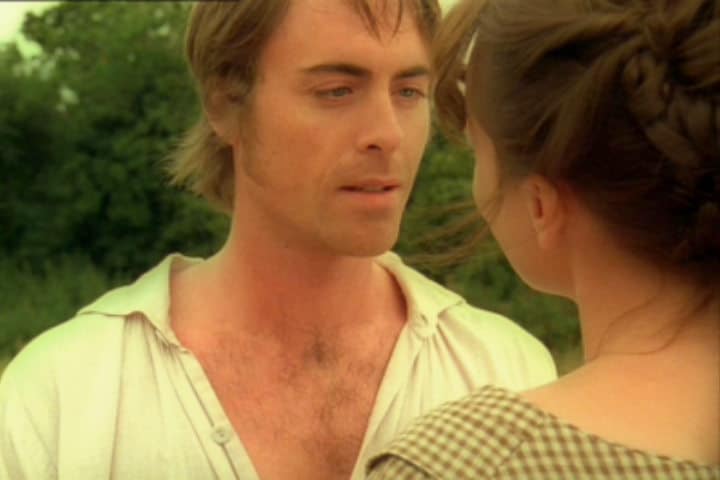 And then there’s the dreamy Dick Dewy, all grounded and unpretentious and good and working class, with steely blue eyes. Fancy and Dick have electric chemistry from the start, this basal physical connection. There are trysts and stolen kisses, lots of longing glances. Washing hands has never been so sensual and sexy. Our brazen heroine even gets her petticoats wet in a rather intense scene involving a certain bare-chested carrier and a riverbank.

RELATED: Romantic Moment of the Week – Far From the Madding Crowd’s Bathsheba and Gabriel 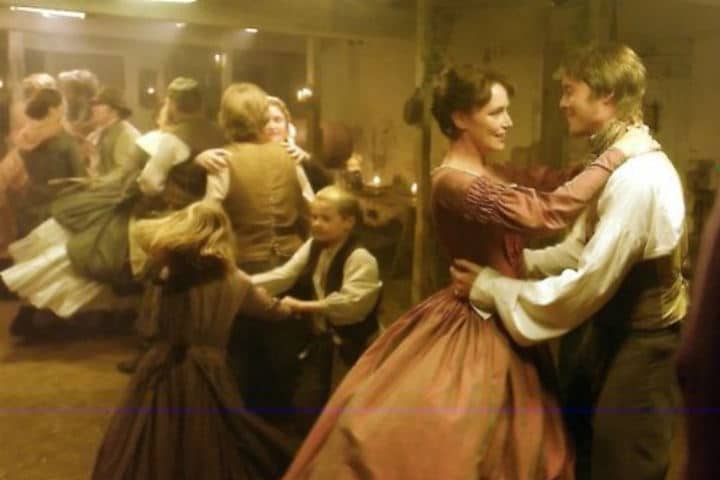 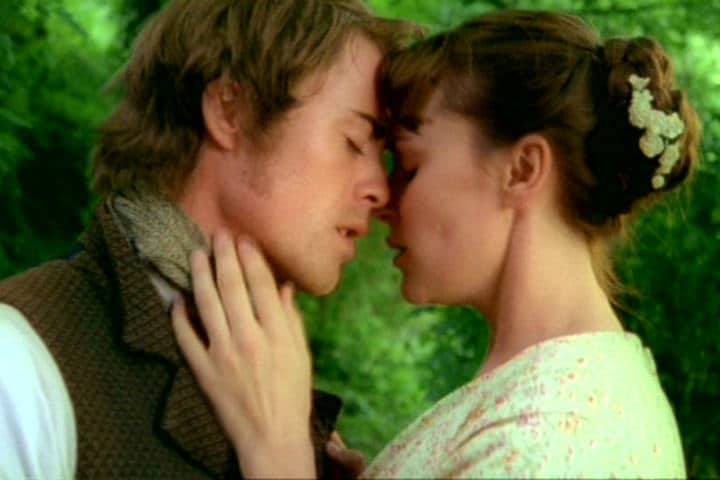 But Mr. Shinar proposes, and Fancy takes her time contemplating the offer. She waffles and puts on airs at times and doesn’t know what to do with others. And the seasons change. The Greenwood tree loses its wintry barrenness, budding in the spring, glorious in its full, green foliage during the long, hot days of summer, and all withering colors in the autumn, when there’s a wedding. Yes, a year in the life of Miss Fancy Day in the village of Mellstock. And who does she choose to marry?

A Hardy Tale with a Happy Ending

I rather enjoyed Under The Greenwood Tree. As a Hardy tale, I kept expecting the other shoe to drop, that some sort of tragedy was in the making. But it never came. It is truly a light-hearted story of love. It’s funny and sweet. The acting is excellent and the production is first rate. The church musicians provide a chorus of comedic relief throughout. So yeah, it’s fluff, foreseeable fluff, but that doesn’t make it any less delightful or sighingly good.

Our romance-themed entertainment site is on a mission to help you find the best period dramas, romance movies, TV shows, and books. Other topics include Jane Austen, Classic Hollywood, TV Couples, Fairy Tales, Romantic Living, Romanticism, and more. We’re damsels not in distress fighting for the all-new optimistic Romantic Revolution. Join us and subscribe. For more information, see our About, Old-Fashioned Romance 101, Modern Romanticism 101, and Romantic Living 101.
Pin this article to read later! And make sure to follow us on Pinterest.
By Jessica Jørgensen on October 19th, 2017

6 thoughts on “Under the Greenwood Tree (2005): A Happy, Non-Tragic Thomas Hardy Love Story!”