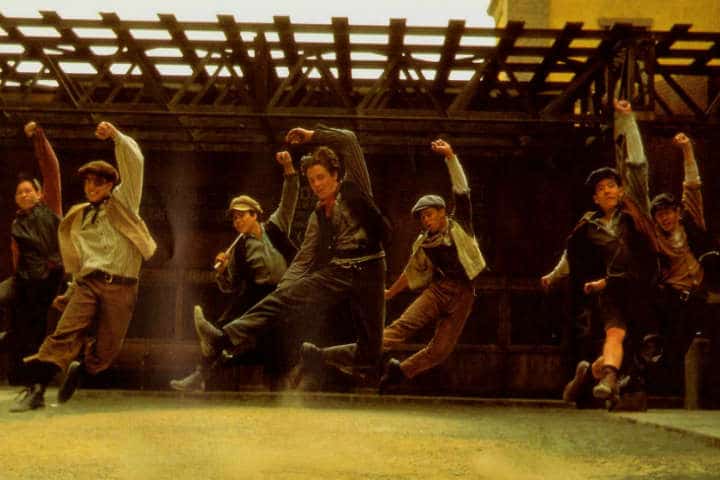 If you think about it, Newsies is a strange choice for a musical. Especially a Disney movie-musical. It’s a story about children fighting for their rights to a fair wage, but somehow, it works. With music by Alan Menken and the direction of Kenny Ortega, Newsies succeeds to entertain and delight. Soon after, Ortega would go on to direct Hocus Pocus and ultimately all three of the High School Musical films.

Newsies were the boys who sold the daily papers, and the film follows a group of 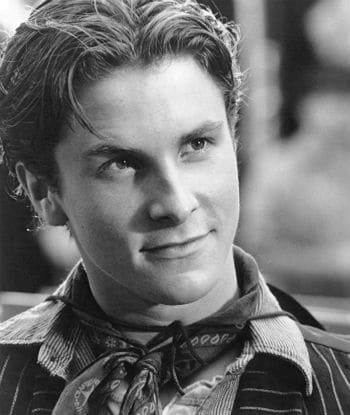 New York City newsies in 1899. Newsies is, in fact, loosely based on the 1899 newsie strike. Starring Christian Bale as Jack Kelly, the tough leader of the Newsies, and David Moscow and Luke Edwards as David and Les Jacobs, the film follows the newsies as they start a strike, protesting unfair conditions.

To save money, newspaper man Mr. Pulitzer decides to start charging the newsies more for the papers that they sell. Since the newsies are not able to sell back their papers, this causes quite a bit of concern. The newsies then go on strike, led by Jack and David. The two boys are a great pair, and they inspire the other boys to participate in the strike, even gathering newsies from the other parts of New York City.

Between trying to operate a successful strike, and taking on the most powerful man in New York, Jack Kelly also has a goal. He wants to go out west to Santa Fe, a place where he can start over and find a family. But Mr. Snyder, who runs The Refuge, a prison house for orphan boys, is after him, and as he spends time with the Jacobs family, he wonders if a family might be closer than he thought. 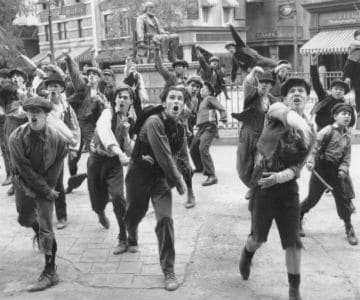 Meanwhile, the newsies must tangle with the Delancey Brothers, scabs, and the police. The scabs are the people who take the jobs of the strikers. They are looked down on by the union members. Usually, scabs are in danger of being beaten by the union, something that happens in Newsies. Since the newsies are going against Pulitzer, the authority figures in New York are also against the newsies.

As Jack grows closer to the Jacobs family and starts to develop feelings for David and Les’s sister Sarah, the strike begins to hit a wall when the newsies are arrested. Although they are released, Jack is not. Learning about a very real threat to the people he has grown to love, will Jack stay the course, or will he betray the union to save his friends? And if he does, can he ever go back? Will the strike succeed? Can a small group of boys change the world? These questions are answered in Newsies!

From the Pages of History

Historically, the biggest issue is the ending of the film. In the actual 1899 newsie strike, the newsies don’t technically win what they’re striking for. However, they do get the right to sell their papers back to the company if they don’t sell them. It’s not as nice of an ending, but it still does help them quite a bit. I can see why they changed it since the ending in the film is just nicer. 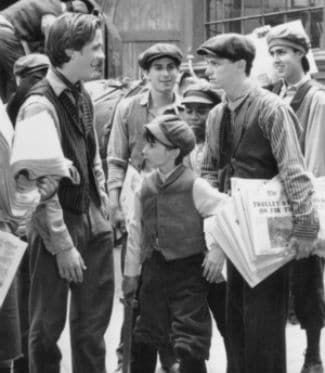 The wide-eyed optimism of Les and the passionate do-gooder attitude of David come across wonderfully in the film, especially when they are with the rough and tumble Jack. The two main leads, Bale and Moscow, play off each other brilliantly, and the supporting cast fits in wonderfully as well. Each boy has a distinct personality that comes across well, from the frightening boys in Brooklyn to Crutchy and Racecar. The adult characters, like Snyder, Denton, and Wiesel, support the young actors without overwhelming them.

Newsies has quite a few talented dancers in the cast. Christian Bale might not be one of them. We rarely see him in the group dances. His solo dance was nice, though, and the song “Santa Fe” makes me cry every time. The only downside was his accent. It was a little off at times. Despite that, I thought that he was able to communicate well with his facial expressions, so that made it better.

The romance is almost non-existent. It almost feels like they added Sarah in because they 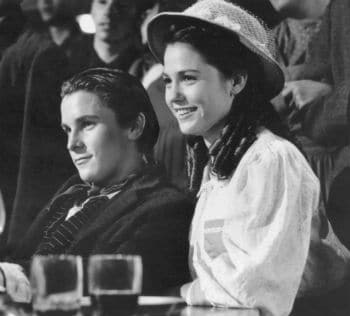 didn’t have that many female characters. She’s not a bad character; I just wish she had had more to do. I understand that she’s not a newsie and therefore not a main part of the plot, but still. The boys all seem to work well together. The movie is able to capture a sense of friendship between the boys, which makes the story come alive in an exciting way.

In the end, the characters learn that everyone has to work together and that some things are worth fighting for. Although it’s not a historically accurate movie, that is still a beautiful lesson. When paired with awesome choreography, wonderful music, and solid acting, Newsies is a fun movie that will make you laugh and cry. It’s a classic underdog story where the little guys stand up to the powerful, and triumph.

Content Note: PG. There are some scenes of violence and peril. There is also some partial nudity.

Have you seen Newsies? What are your thoughts on this film?

Our romance-themed entertainment site is on a mission to help you find the best period dramas, romance movies, TV shows, and books. Other topics include Jane Austen, Classic Hollywood, TV Couples, Fairy Tales, Romantic Living, Romanticism, and more. We’re damsels not in distress fighting for the all-new optimistic Romantic Revolution. Join us and subscribe. For more information, see our About, Old-Fashioned Romance 101, Modern Romanticism 101, and Romantic Living 101.
Pin this article to read later! And make sure to follow us on Pinterest.
By Bailey Cavender on August 19th, 2017