Unbelievable though it is, I only just recently watched this Oscar-nominated film. The time and distance doesn’t allow me to converse with others who enjoyed it “in the moment.” But I don’t regret the distance from the buzz. Here’s the film’s synopsis:

Inspired by the story of P.T. Barnum, the film follows the visionary who rose from nothing to create a mesmerizing spectacle. – Fox Movies

Today I revisit this film with our classic romantic moment feature. A moment full of the romantic feelings each and every truly memorable love story should strive to embrace.

The Lead-in: The Romeo and Juliet Syndrome

From the moment he sees Anne, Phillip’s besotted. Their first encounter is during Anne’s trapeze act when her face comes within inches of his. As the camera slow motions the scene, on Phillip’s face, we see his interest piqued In the aftermath, he softly queries, “Who is that?” 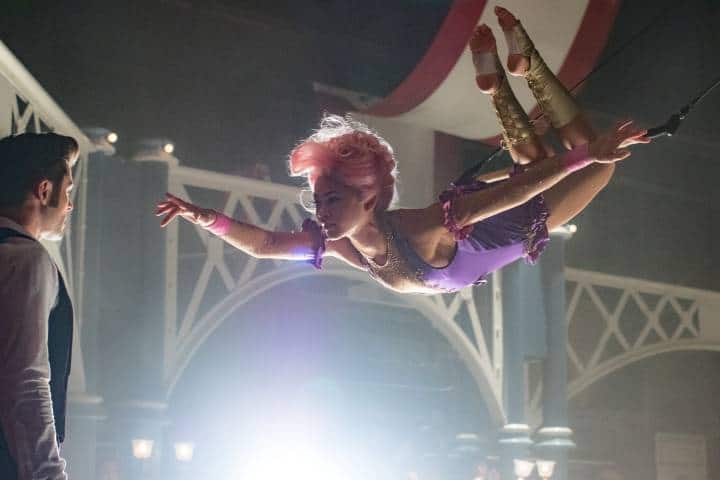 No matter the interest, their would-be relationship is doomed by culture and class. But Phillip refuses to accept defeat. He instead plans an evening out, without Anne’s knowledge.

RELATED | Introducing the Romantic Moment of the Month With ‘Take Two’

With tickets in hand, Phillip, a man who comes from wealth and privilege, takes Anne to the theater. It’s an experience Anne has never had and is something he wants to give her.

At the theater, the couple sees Phillip’s parents who insult their son’s choice of a companion; their remarks send an upset Anne back to her trapeze. A place she, somehow feels, safe…

Classic Romantic Moment of the Month: The Greatest Showman!

It’s here that Phillip finds Anne, having followed her back to her safe place. No matter how he pleads, Anne isn’t ready to risk them or her heart.

With gentle echoes and words, Phillip begins to sing, “You know I want you. It’s not a secret I try to hide. I know you want me. So don’t keep saying our hands are tied.”

Through music, he continues to try and sway this girl he loves. “You claim it’s not in the cards. Fate is pulling you miles away. And out of reach from me. But you’re here in my heart. So who can stop me if I decide that you’re my destiny?” 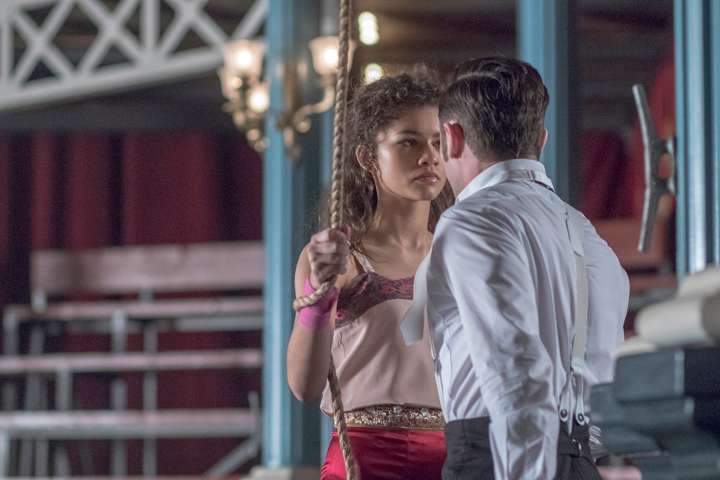 The music crescendos and he proposes they make their own destiny:

“What if we rewrite the stars? Say you were made to be mine.”

Coming close to her, he places a hand on her hip as if to gently draw her closer. 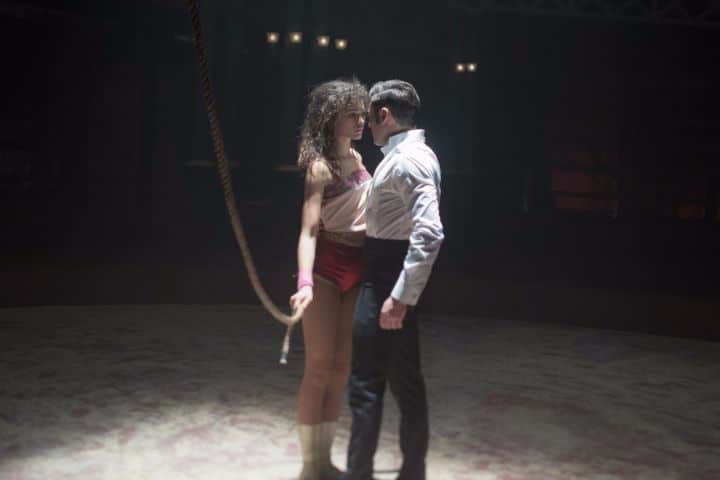 “Nothing could keep us apart. You’d be the one I was meant to find.”

“It’s up to you, and it’s up to me,” he continues in song, “No one can say what we get to be.” He begins to twirl her in a kind of dance as a smile brightens her face.

“So why don’t we rewrite the stars? Maybe the world could be ours. Tonight”

As he pours his heart out, she leans in close as if to kiss him, only to then use her trapeze rope to escape the ground and Phillip! Puzzled, Phillip attempts to locate her in the dark, tall spaces of the ceiling.

In the song, she begins to reply:

“You think it’s easy. You think I don’t want to run to you. But there are mountains….”

As they dance and Anne twirls through the air, and the music swells, she says, “No one can rewrite the stars.” And asks, “How can you say you’ll be mine? Everything keeps us apart. And I’m not the one you were meant to find…” 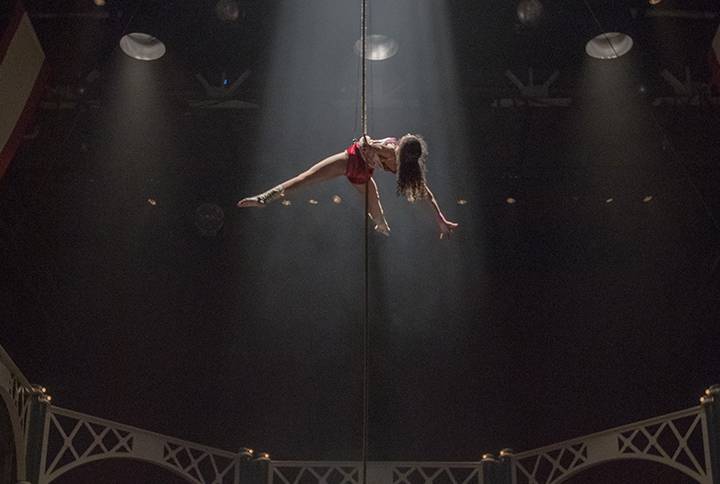 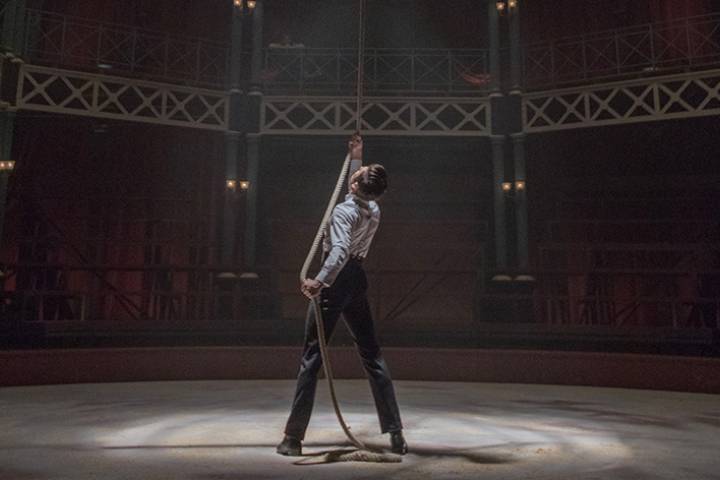 Then safe in his embrace, even for only a moment, she wonders:

“How can we rewrite the stars? Say that the world can be ours. Tonight” 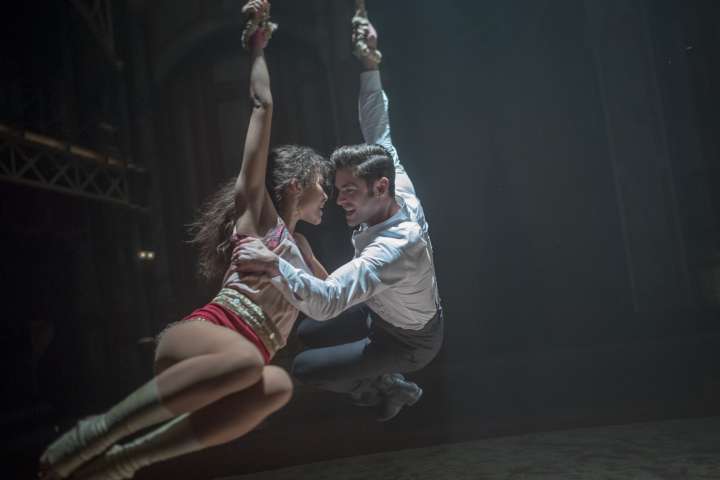 Momentum and instinct bring them together, and twirling through the air she sings, “It feels impossible” to his echo, “It’s not impossible.”

Subsequently, she again disappears from his view, and he begins to sing again. Wondering: “How do we rewrite the stars?”

Twirling through the air in a circle around him, Phillip jumps onto the rope with her. Together, they arc through the air, joining their voices in song:

“And why don’t we rewrite the stars? Changing the world to be ours.” 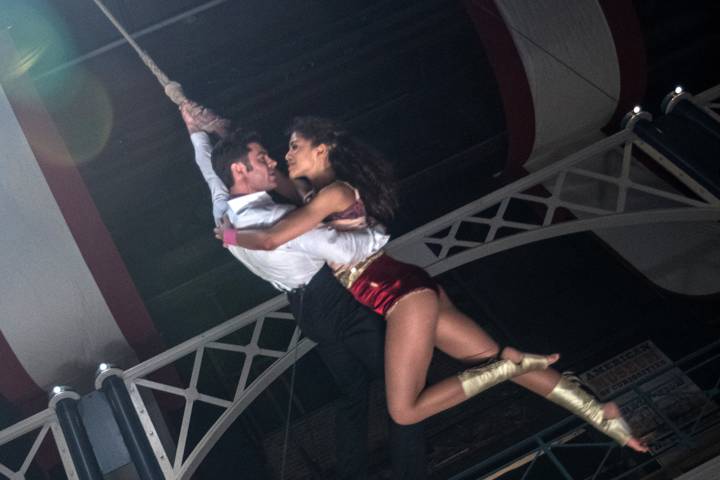 As they gently and softly come to the ground, Anne is the voice of reason again. Her smile is gone and she lays her heart open:

“You know I want you. It’s not a secret I try to hide. But I can’t have you. We’re bound to break and my hands are tied.”

For the briefest moment, she lingers. But then, without another note, she walks out of his arms and away from him…

…contrary to how this ending may sound, fortunately, this isn’t the last we see of Anne and Phillip or their romance. If this were a conclusion, it’d be bittersweet, but at the moment, it oozes romance.

This sequence from The Greatest Showman is one of the most delicately romantic I’ve seen. In a long time. There’s something authentic that goes beyond the normal “swoons” of filmmaking. Perhaps it’s the chemistry of Zac Efron and Zendaya, or maybe the unexpected setting or the unique “dance” the scene expresses. Or it could be the lyrics of the song. Whatever the “it factor” that makes this scene sparkle is something that is sure to give you all the feels.

Have you seen The Greatest Showman yet? Did you find this scene as memorizing as I do? Would you have liked the scene to be different? Sound off below with all of your thoughts!

Our romance-themed entertainment site is on a mission to help you find the best period dramas, romance movies, TV shows, and books. Other topics include Jane Austen, Classic Hollywood, TV Couples, Fairy Tales, Romantic Living, Romanticism, and more. We’re damsels not in distress fighting for the all-new optimistic Romantic Revolution. Join us and subscribe. For more information, see our About, Old-Fashioned Romance 101, Modern Romanticism 101, and Romantic Living 101.
Pin this article to read later! And make sure to follow us on Pinterest.
By Rissi JC on November 17th, 2018

2 thoughts on “Classic Romantic Moment of the Month: The Greatest Showman’s Love Story in the Stars!”