The Greatest Showman is Hugh Jackman’s passion project based on the life of P.T. Barnum, circus impresario and legendary showman.

In this biographical (though not accurate) adaptation, Phineas T. Barnum rises from very humble beginnings. He accomplishes the daunting task of marrying his childhood sweetheart Charity, who turns her back on her wealthy parents and their social circle. In time, they have two beautiful daughters and a happy if financially insecure life.

But, it isn’t enough for Barnum, whose desire that his family have more, masks the deeper motivation of “proving” himself to the world and Charity’s parents. Barnum is a dreamer, visionary, gambler and risk taker. He concocts a daring idea and creates a museum where human physical oddities are on display. Despite protests from the cities residents and scathing newspaper reviews, his gamble pays off.

RELATED POST: Vintage Review: Oklahoma! A Movie With Songs and Laughter As High As An Elephant’s Eye

As his fortunes increase, he continues to take risks and see them succeed. But, it doesn’t come without a cost. Barnum’s obsession puts a strain on his marriage, deprives his daughters of his presence, and never manages to fill the need for approval and success that he seeks. Eventually, it even negatively impacts his work and loyal employees. Will the flamboyant showman who risked it all end up losing everything that matters? 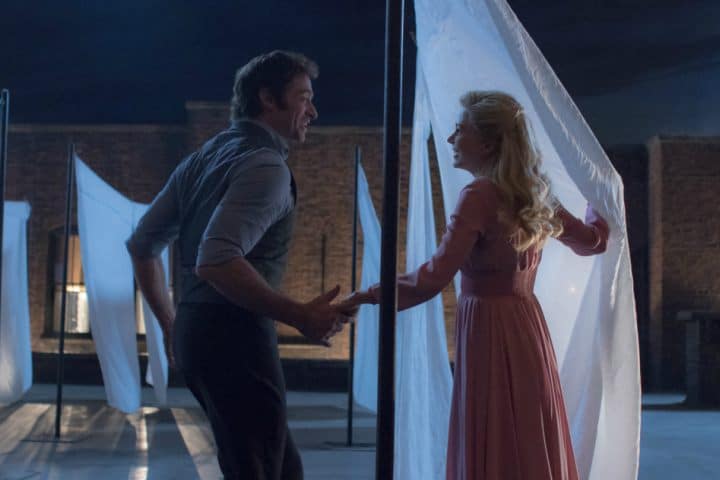 THE GREATEST SHOW ON EARTH

The Greatest Showman is a vibrant, colorful, joyful and even thoughtful musical film which I thoroughly loved. From the opening credits to the final scene I was completely engaged in the world of P.T. Barnum and his circus.

Hugh Jackman is clearly having the time of his life playing P.T. Barnum. He infuses his character with imagination, cheerful determination and a larger than life personality. But he also displays quiet love and devotion. Jackman is no stranger to singing in musical films. In The Greatest Showman, he also displays competent dancing skills in what look like complicated routines.

Michelle Williams is ethereal as the content, long-suffering wife. I only wish her character had a bit more backbone and personality, but perhaps that is my modern sensibilities skewing my perspective. The two young actresses portraying the Barnums’ daughters, Caroline and Helen are charming and full of wonder and practical advice for their father. Former Disney star and singer Zendaya has a small yet significant supporting role as a trapeze artist and love interest to Efron. Playing the international singing sensation Jenny Lind is Rebecca Ferguson who is stunning, but has had her acting skills better used elsewhere. Though these women are very talented, I feel their roles served more as eye candy for the male leads and audience. I really wish their characters had been better developed.

RELATED POST: The Phantom of the Opera (2004) -A Feast for the Eyes and the Heart

Aside from Hugh Jackman, another standout performance for me is Zac Efron as wealthy society scion turned Barnum circus investor and manager. His role is based on Barnum’s partner Bailey. Efron is a familiar face to musical fans. I’ve never seen him on screen before, but he has charisma, looks, and talent. Whereas Jackman adds his professional gravitas to the musical numbers, Efron displays youth and energy.  Broadway actress Keala Settle as the bearded lady shows exceptional talents in only her third feature film. Of all the supporting characters, she has the strongest, most memorable performance.

The Greatest Showman is nothing if not theatrical. It features steam-punk inspired sets, gorgeous costumes (some of which were borrowed from the actual Barnum circus), and engaging song and dance numbers. Somehow, I completely missed the little detail that this film is a musical. So, imagine my surprise when the opening scene featured not dialogue, but a driving beat and lyrics. 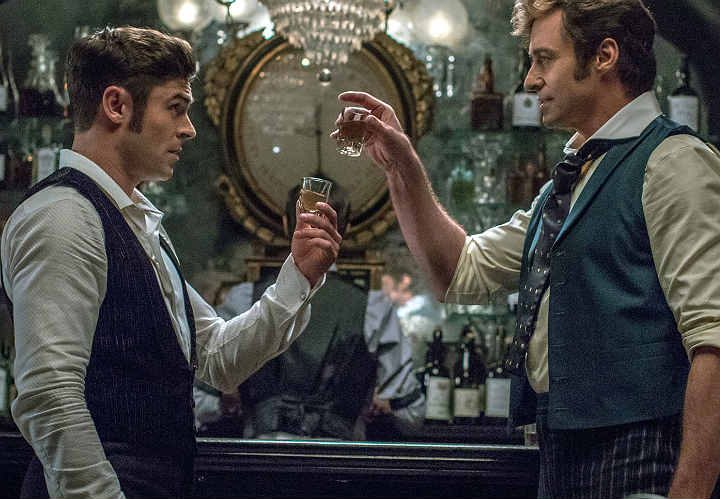 The Greatest Showman is what a great musical is all about. Full of flash, energy, color and fun. It reminded me a bit of the popular and beloved MGM musicals of the 1950’s and ’60’s.

I say with confidence that the songs are one of my favorite things about The Greatest Showman. Not only are the tunes difficult to forget, but the lyrics provide depth and help advance the overall story. I was only two songs into the film when I leaned over to tell my sister that I wanted to buy the soundtrack (which I did!).  The same team that worked together on La La Land, created the music for this film as well. And while I didn’t love La La Land as much as I wanted to, The Greatest Showman is what a great musical is all about. Full of flash, energy, color and fun. It reminded me a bit of the popular and beloved MGM musicals of the 1950’s and ’60’s.

With all that show, The Greatest Showman does not neglect the substance of the story. It tackles themes of compassion, courage, family, and acceptance. It also examines the balancing of dreams with practicality and the value of career success versus family harmony. This exploration gives the film the heart and soul it requires to be really special.

If you are looking for a historically accurate biopic, then this is not the film for you. But if you enjoy entertaining, fun, family-friendly films, then The Greatest Showman fits the bill. The greatest recommendation I can give it is found in the words of its’ star, “A bad musical stinks to high heaven, but when a musical works, there’s nothing like it,”[1]

Where to Watch: Playing in theaters now.

Our romance-themed entertainment site is on a mission to help you find the best period dramas, romance movies, TV shows, and books. Other topics include Jane Austen, Classic Hollywood, TV Couples, Fairy Tales, Romantic Living, Romanticism, and more. We’re damsels not in distress fighting for the all-new optimistic Romantic Revolution. Join us and subscribe. For more information, see our About, Old-Fashioned Romance 101, Modern Romanticism 101, and Romantic Living 101.
By Brittaney B. on January 5th, 2018