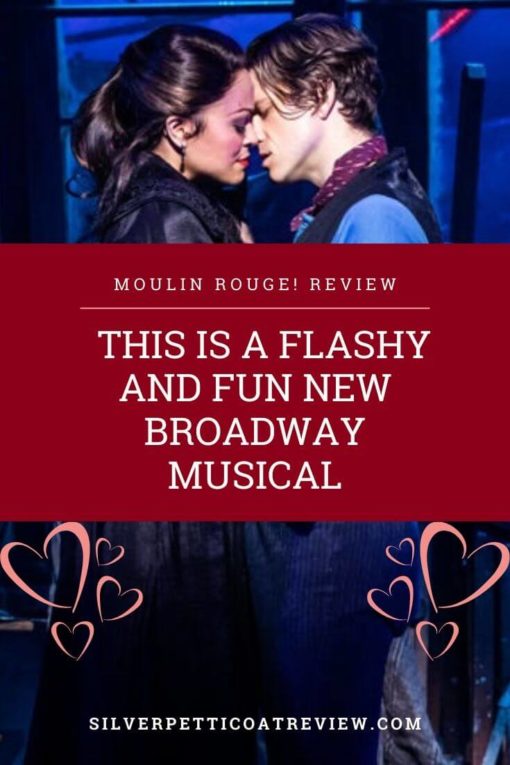 Moulin Rouge! is an entertaining spectacle but falls short of becoming an emotional triumph.

Based on Baz Luhrmann’s award-winning movie-musical, Moulin Rouge! on Broadway is a spectacular event you won’t want to miss. From the gorgeous set design to the inventive choreography from Sonya Tayeh to the excellent cast, not to mention the eye-popping costumes and catchy music. However, don’t go in expecting the musical to be exactly like the movie. It’s not. And while I didn’t expect the two to be a precise match since they are different mediums (film and theater), I did expect the overall essence to remain the same. I also believed the soundtrack would stay intact – but with new additions. Again, that is not the case.

Where Moulin Rouge, the movie, is a romantic tragedy with purposely chosen songs to fit the tone of the scene and advance the story, Moulin Rouge, the Broadway show, is a pop jukebox musical with songs chosen to entertain rather than give you all the feels.

Now, don’t get me wrong, the musical is good. I loved it and want to go again. But I left feeling like it could have been better. Still, overall, it’s a must-see musical of excess – fitting to the historical splendor of the Moulin Rouge.

The Story of Moulin Rouge! The Musical!

Christian (Aaron Tveit), a naïve aspiring songwriter, meets Toulouse-Lautrec (Sahr Ngaujah) and Santiago (Ricky Rojas), two Bohemians who introduce him to the world of the Moulin Rouge. There, he falls in love with the courtesan, Satine (Karen Olivo), as he also begins writing their new show.

But she’s torn between falling in love with Christian and choosing a life with the corrupt and villainous Duke (Tam Mutu). She also feels duty-bound to Harold Zidler (Danny Burstein – though I saw his understudy) and the other workers at the Moulin Rouge.

Meanwhile, tragedy looms in the distance as Satine begins to succumb to a fatal illness. Will Christian and Satine find a way to be together before it’s too late? Will Satine be able to defeat the Duke? More than a love story, however, the Moulin Rouge! is a thrilling experience full of familiar pop songs, timeless classics, and yes, can-can dancers.

Moulin Rouge! starts strong. I could feel the adrenaline and excitement in part due to the lavish set design. Not to mention, the 20-minute pre-show where cast members come out on stage – creating an almost creepy ambiance. And when Aaron Tveit enters near the end of the pre-show, the mood once again shifts. The Moulin Rouge! is about to begin.

What then follows is a couple of hours of pure musical entertainment with fabulous singing and dancing. From start to finish, there’s never a dull moment, from a showy rendition of “Lady Marmalade,” at the beginning to the show-stopping introduction of Satine to the “Elephant Love Medley,” to the “Roxanne” tango scene, and more. My favorite musical moment, however, was the gorgeous romantic duet, “Come What May” between Christian and Satine.

But what works best is the cast. Aaron Tveit was my personal favorite because he embodies the essence of Christian, the romantic writer looking at the world with a lens of innocent romanticism. Plus, Tveit has some amazing chops and he’s dreamy in the role. Every time he’s on stage, I fell in love with the show more.

RELATED: ROMANTIC MOMENT OF THE WEEK: BRAINDEAD – LAUREL AND GARETH AND THE GRAND GESTURE

Karen Olivo, on the other hand, is just as good but is nothing like Nicole Kidman’s ethereal Satine from the film. Rather than playing her as a dreamy romantic longing to become an actress, Olivo gives her a grittier, realistic interpretation. So, while she’s playing an almost entirely new version of the character, she sparkles on stage and is a joy to watch.

I also enjoyed the new characterization with Toulouse, played by the incredible Ngaujah. In this version, Toulouse has unrequited feelings for Satine and shares an intriguing story about how they met as children.

The backstory about these two street kids was lovely and gave depth to their characters. It also presents a different type of “love” and makes Toulouse fascinating. Plus, Ngaujah has an incredible stage presence, making him impossible not to notice.

Sadly, as much as I wanted the show to be one of the greatest stage musicals ever, not everything worked. The book, or the narrative structure of the show, feels more like a rough draft at times than a finished copy. And some of the music mixings needed some edits. Still, it’s an excellent production – but a few fixes are required to make it superb. I have five such suggestions.

Fix One: Bring Back Songs From the Movie

The fixes for this next section directly relate to the first problem. While I loved Olivo in the role, I think it was a mistake to change Satine as a character. In this version, perhaps to be more modern, Satine doesn’t mind being a courtesan working at the Moulin Rouge. And she has no dreams of becoming like Sarah Bernhardt.

The love story also presents more like a love triangle. While it’s obvious she has no feelings for the Duke, the tension between Christian and Satine is less emotional and believable.

There’s no avoidance of the Duke, for example, because she loves Christian. But instead, Satine needs to choose between love and being a courtesan. Unlike the film, she sleeps with both men throughout the story. And while she’s dying, there’s less mystery and suspense around it.

Cut the song “Firework,” as a significant ballad for Satine. It just didn’t work. The pop song didn’t fit the mood of the scene or Satine’s characterization, making the moment feel light-hearted when it shouldn’t have.

On top of that, while it was fun to hear all the different pop songs, at times, the music arrangements became messy. I suggest toning it down just a little bit. It could make all the difference.

In the musical production, each of these ideas has equal weight. Whereas in the film, it’s clear “the greatest thing you’ll ever learn is just to love and be loved in return.” While I think emphasizing these points works, I do believe they need to give “love” even more emphasis.

In a romance, for it to have the full effect, the love needs to be more felt. Even as Christian narrates the show, looking back at the love story between him and Satine, it doesn’t have a tragic air. It feels too light-hearted. So, to fix this, they should add a heavier weight to his words. Otherwise, one wonders if Christian loved her as much as he said he did.

Honestly, the ending of Moulin Rouge! didn’t entirely work and fell emotionally flat. Instead of the spectacular (spectacular) finale in the film, we’re given such a watered-down version of it so as to make this adaptation feel weak – when it isn’t.

There’s only a small version of a play within a play – but it’s not a spectacle. There’s no maharaja, and there’s no Christian throwing money at Satine. The Duke isn’t even there for the show. The villain (who has murdered before) is defeated simply by Satine, saying, “you don’t own me.”

His defeat felt too easy, even though I appreciate Satine standing up to him. To make this work, the Duke shouldn’t have accepted that at face value since he’s a villain. I wanted more of a fight. Also, part of the entire film’s climax centers around the Duke, his henchman with a gun, and then ultimately the triumph over the villains in the name of love. And while there’s no Duke in the Broadway show’s climax, there is still a gun.

RELATED: THE KING AND I – THE SPECTACULAR MUSICAL REVIVAL PREMIERES ON PBS

Unfortunately, the weapon isn’t on stage because of the villains trying to kill Christian (despite foreshadowing). Instead, it’s there because of Christian threatening to kill himself. Frankly, this creative choice presents Christian as an almost abusive character upset because Satine said she didn’t want to be with him. He’s not, of course, but it’s still a strange choice to not have the Duke threatening them instead. The narrative structure barely holds together here.

Oh, and if you imagined the epic encore of “Come What May,” with Christian singing up the aisle – it’s not there. Yes, they reprise the song but only briefly and not in an ambitious way.

Ultimately, Satine still dies. However, the emotion falls flat despite the strong actors. And then, a minute later, before you have time to process, the cast is singing a few more fun songs and reprising “Lady Marmalade.”

Genuinely, I don’t understand why anyone would want to change the ending so drastically. Sure, it couldn’t be exactly like the movie. But to completely alter the conclusion into something with narrative failings and a lack of emotion was mind baffling.

They honestly should consider a revision.

Perhaps I’m not the best judge, though. I was one of the movie fans who saw it three times in the theater, and overall, it’s one of my favorite films of all time. So, my expectations were high. Still, fans of the film should be informed so that they won’t be disappointed.

If you go in expecting something like the movie, you won’t get it. But if you go in with an open mind and enjoy the brilliant visual spectacle, you’ll have a fun ride. Plus, the ticket price alone is worth it to see Aaron Tveit as Christian. So, see him on stage while you still can!

Overall, Moulin Rouge! is one of the most entertaining musicals I’ve ever seen. Aaron Tveit and Karen Olivo are stars worthy of awards for their performances – and despite my rant and (mostly) minor gripes, I can’t wait to go again.

Content Note: Nothing explicit but there is innuendo. Equivalent to a PG-13.

Have you seen Moulin Rouge! The Musical!? Do you plan to? Do you agree with my review of Moulin Rouge!? Let me know your thoughts about the show in the comments!

4 thoughts on “‘Moulin Rouge!’ Review: This is a Flashy and Fun New Broadway Musical”