Bringing Up Baby was my first introduction to the world of classic film. It was also my first experience with the screwball comedy genre as well as Katharine Hepburn and Cary Grant. With such a fabulous initiation, is it any wonder that I not only adore classic films but that both Grant and Hepburn along with the screwball comedy genre remain my very favorites? No matter how many (countless) times I watch this picture, it never fails to entertain and to lift my spirits.

Screwball comedy is not a genre we hear much about today. It had its’ heydey from the 1930’s through the 1940’s, but many of today’s comedies can trace their inspiration to these films. For the uninitiated, screwball comedy is basically romantic comedy on steroids. It generally features a wealthy heiress, a battle between the sexes, and the most outrageous and ridiculous situations that Hollywood screenwriters could dream up. And Bringing Up Baby is not only one of the best examples but also perhaps the most outrageous of them all.

David Huxley is a paleontologist who is THIS close to completing the skeleton of a brontosaurus. He just lacks installation of the final bone (the intercostal clavicle) and funding in the form of a million dollar donation by the wealthy Mrs. Carlton Random. He is also one day away from a marriage of convenience to the dull and practical Alice Swallow.

David’s meeting with Mrs. Random’s attorney, Mr. Peabody, is unfortunately disrupted by Susan Vance. After a meet-cute filled with confusion, theft, and mishaps, David is forced to reschedule his meeting for that same evening. However, David’s bad luck continues as he once again runs into Susan who once again ruins his meeting.

RELATED: 28 of the Best Meet-Cutes in Romance Movies

Susan, however, is besotted and decides David is the man for her. Believing him to be a zoologist, Susan tracks him down to request his help. Her brother has sent a tame pet leopard as a gift for their aunt. Despite David’s refusal to help Susan deliver ‘Baby’, Susan coerces him by promising to speak to Mr. Peabody on his behalf. Unknown to David, Mrs. Random just happens to be Susan’s aunt.

Susan Vance: “He’s (Baby) three years old, gentle as a kitten, and likes dogs.” I wonder whether Mark means that he eats dogs or is fond of them? Mark is so vague at times. [Reading aloud from letter] “He likes music, especially that song ‘I Can’t Give You Anything But Love, Baby’.”

David and Susan head off to the family’s Connecticut farm to deliver Baby. But Susan being Susan, everything that can go wrong does. Add in the family dog George who buries the intercostal clavicle, an escaped killer leopard, a visit from a family friend who is a big-game hunter and Susan’s introduction of David as a man recovering from a nervous breakdown and you’ve got the recipe for one of the funniest movies ever.

Bringing Up Baby is the second of four films co-starring Grant and Hepburn together. Despite its excellent reputation today, it did not fare well at the box office and was one of the films responsible for earning Hepburn the label of Box Office Poison. Grant’s reputation did not suffer the same. Today, Bringing Up Baby appears on many “best of” lists published by entertainment trade magazines. It also appears on several “best of” lists published by the American Film Institute.

Both Grant and Hepburn give excellent performances. Although, the character of Susan Vance does become annoying occasionally, due to her flighty nature, utter lack of logic and stalking tendencies. This is one of the few times we see Grant play this type of character; a socially awkward, sloppily dressed…nerd. His role is mainly to appear continually perplexed by the situations Susan gets them into. But the combination of these two characters and the opposites attract storyline leads to some memorable moments.

David Huxley: Now it isn’t that I don’t like you, Susan, because, after all, in moments of quiet, I’m strangely drawn toward you, but – well, there haven’t been any quiet moments.

Bringing Up Baby benefits greatly from a superb cast of character actors, among them Charlie Ruggles, Walter Catlett, May Robson and Barry Fitzgerald. Fans of classic films will recognize these highly respected names. Ruggles is a personal favorite of mine. He is fabulous in his role as the bumbling and befuddled, Major Horace Applegate. Applegate is a big game hunter whose visit to Elizabeth Random can be nothing but bad timing with both Baby and the killer leopard on the loose.

Robson plays Susan’s Aunt Elizabeth as the only sane one of the bunch surrounded as she is by the mayhem that accompanies Susan and David’s visit. Walter Catlett plays a small role as the inept and idiotic Sheriff Slocum. The chaos that invades his small hamlet disrupts his goal for re-election. Per film lore, Catlett also coached Hepburn behind the scenes. Hepburn lacked skill in her comedic timing which the veteran Catlett helped her to develop.

Sharp-eyed classic film fans might also recognize the wire-haired terrier who plays George, the dog, as the same who appears in The Thin Man film series. He also appeared with Cary Grant in The Awful Truth and as usual plays an important role in Bringing Up Baby.

This being in the screwball genre means the picture is very much a situational comedy. Much of the humor comes from the outrageous circumstances which develop from Susan’s flighty, reckless and air-headed behavior. At one point Susan and David find themselves under the window of a psychiatrist serenading their leopard who is standing on the roof.

However, when Susan tries to explain to the doctor what they are doing, Baby runs away. Susan almost finds herself committed to an asylum. Then, of course, there is the penultimate sequence where all of the main and supporting characters find themselves behind bars at the county jail. This excludes Susan who has already escaped her cell and is out hunting for Baby. I’m pretty sure the screenwriters thought of every far-fetched idea they could and threw it into this film.

One of my favorite things about Bringing Up Baby is the utterly zany dialogue which is just as funny as the movie’s circumstances. I can’t tell you how many times I’ve quoted this film in my daily life. Part of the success of the dialogue belongs to Hepburn and Grant who ad-libbed some of their lines. The rest of the credit belongs to writers Dudley Nichols and Hagar Wilde. Wilde wrote the original short story from which the movie is adapted. Nichols had won an Oscar two years previously for his talent and deserved another for Bringing Up Baby, in my opinion. 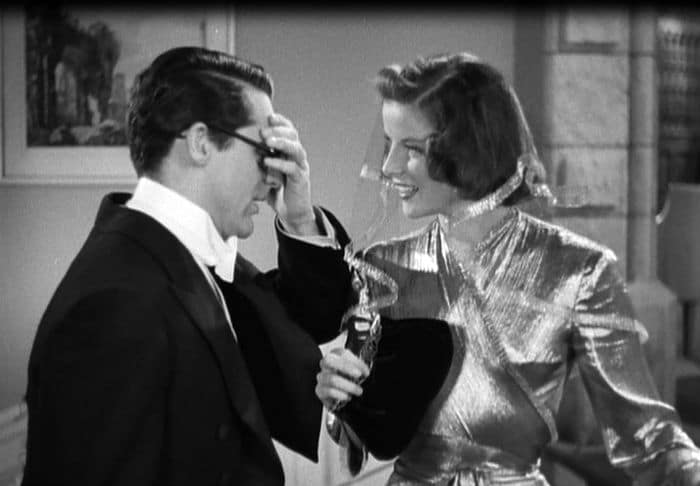 David Huxley: Yes, I am!

Susan Vance: Mm-hmm. The love impulse in man frequently reveals itself in terms of conflict.

Bringing Up Baby is the perfect antidote to a bad day. With witty quips, hilarious characters and situations, a talented cast and fast-paced story, it is more than deserving of all the accolades it has acquired. If you have never seen this picture, I recommend you correct that oversight as soon as possible. You will never be more entertained or laugh harder than when viewing this comedy classic.

Content Note:  As most classic films are, Bringing Up Baby is safe for the family to watch.

Where to Watch: Bringing Up Baby occasionally airs on TCM. It is also available through streaming service FilmStruck. You can also rent it on Amazon, iTunes, Google Play or YouTube or purchase it on DVD.

Our romance-themed entertainment site is on a mission to help you find the best period dramas, romance movies, TV shows, and books. Other topics include Jane Austen, Classic Hollywood, TV Couples, Fairy Tales, Romantic Living, Romanticism, and more. We’re damsels not in distress fighting for the all-new optimistic Romantic Revolution. Join us and subscribe. For more information, see our About, Old-Fashioned Romance 101, Modern Romanticism 101, and Romantic Living 101.
Pin this article to read later! And make sure to follow us on Pinterest.
By Brittaney B. on July 6th, 2018