Murder on the Orient Express (2017) Review

I’m not a scholar of Agatha Christie. My experience with Christie stories consists of the marvelous ITV adaptations like Marple or the more recent BBC series Partners in Crime. When news broke that a big-screen adaptation of Murder on the Orient Express was in production, naturally I became interested.

The Story and Passengers

Famous across continents, Hercule Poirot (Kenneth Branagh) has just closed his final case. The year is 1934, the setting Istanbul. Now his case is complete, Poirot is ready to retire from the spotlight and detective work. He obtains a ticket on a train where his once peaceful train ride turns into the scene of a murder!

Among the passenger list there is the single and American Mrs. Hubbard (Michelle Pfeiffer), and a defensive young doctor (Leslie Odom Jr.). Also on the trip is the pretty governess (Daisy Ridley) with whom Poirot spoke prior to boarding. A devout missionary (Penelope Cruz) who’s haunted. The prim and proper Princess (Judi Dench), and an experienced butler (Derek Jacobi). Finally, the wealthy Ratchett (Johnny Depp), a man with threats against him.

Despite a large number of names cluttering the cast list, even this list does not introduce each of the faces we meet. This train excursion is one not easily forgotten for this reason and others. Among the cast already mentioned, there is also Josh Gad, an all-grown-up Lucy Boynton (ITV’s Sense and Sensibility), Olivia Coleman, and William Defoe. The cast list alone impresses. British stars (and American) seem to have readily joined this impressive period piece based on one of literature’s most talented mystery novelists. Though there is more reason to watch, that is reason enough to give this film a chance. 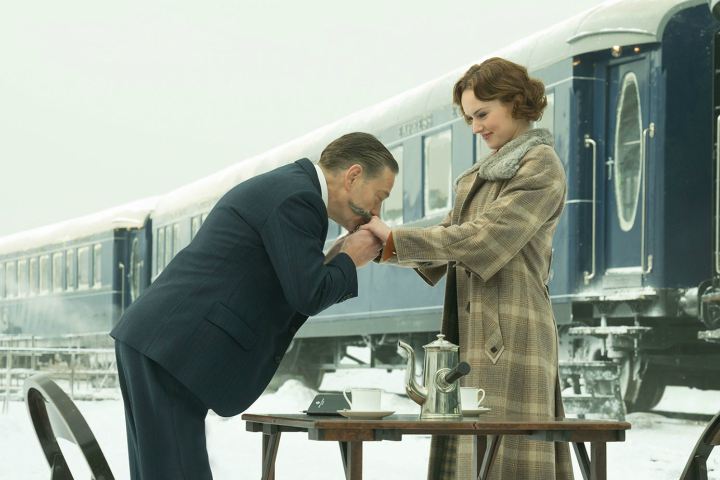 Considering the number of characters, it’s safe to coin this as an ensemble piece. The behind-the-scenes talent brings together a brilliant cast who carry their respective roles with the kind of panache these roles and story demand. One advantage is seeing “breakout” stars (like Daisy Ridley who stars in the Star Wars franchise or Leslie Odom Jr.) mingle with veteran talent. For example, lead actor Kenneth Branagh who also wears the hat of “director” in this all-encompassing period piece.

In a nutshell, that’s precisely what Murder on the Orient Express is. It’s an experience because of its scale and “stage.” If there is a flaw, it’s that the drama moves perhaps a little slowly. Of course, being a Christie story, a viewer should expect this to some degree. That said I do personally feel as if the story could have moved at a faster clip here and there. This is especially true because of Poirot’s “tedious” character. He’s a kind of type-A personality who, though I’m sure is true to Christie’s characterization, takes some adjusting too. As this was my first introduction to him, I was unsure what to expect.

Minor missteps aside, Murder on the Orient Express is stunning. The sets are elaborate as each “stage” the scenes and actor perfectly. Then there are the costumes, which are gorgeous despite a limited setting (primarily a train) on which to shine. Behind the camera, some of these roles are filled by respected talent. This includes Patrick Doyle (music), and costume designer Alexandra Bryne (known for Phantom of the Opera and Marvel adaptations). Responsible for this cast is the talented Lucy Beven. Some of her many credits include the Disney stunners Cinderella, Beauty and the Beast and the upcoming The Nutcracker and the Four Realms.

Going into this without any impressions really aids in how a viewer experiences the plot. Though I did remember hearing who the victim was, I’d no idea how the pool of suspects would line up or who the murderer would be in this old-fashioned whodunit. In consideration of Murder on the Orient Express’ success, 20th Century Fox has already announced it will next adapt Death on the Nile, a novel I read is one of Christie’s most popular. If the company does move ahead with more of the famous Hercule Poirot’s adventures, I know I’ll be one moviegoer ready to catch up with the clever detective.

Content: Rated PG-13 for some violence and “intense” moments. We see a flashback murder scene.

*There is very little romance in this film which is why a lower rating is warranted; however there is plenty of period drama romanticism in the piece!

Our romance-themed entertainment site is on a mission to help you find the best period dramas, romance movies, TV shows, and books. Other topics include Jane Austen, Classic Hollywood, TV Couples, Fairy Tales, Romantic Living, Romanticism, and more. We’re damsels not in distress fighting for the all-new optimistic Romantic Revolution. Join us and subscribe. For more information, see our About, Old-Fashioned Romance 101, Modern Romanticism 101, and Romantic Living 101.
By Rissi JC on January 1st, 2018