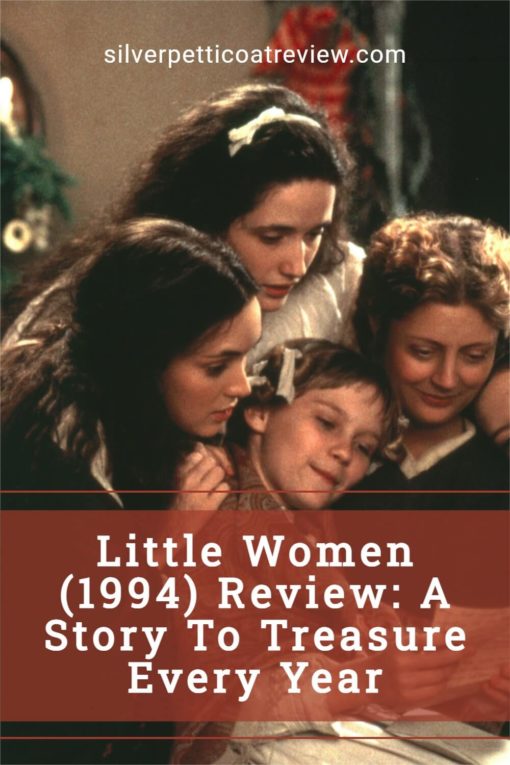 My favorite version of Louisa May Alcott’s iconic Little Women story is the 1994 adaptation. With its A-list cast and beautiful production quality, it’s a film to treasure no matter the season.

The country is embroiled in a war that leaves the once prominent March family struggling. Not to mention they all miss their beloved father who’s away at war working as an Army Chaplin.

Led by their fierce mother, Marmee (Susan Sarandon), the family consists of four daughters. The second eldest Josephine “Jo” (Winona Ryder) is a fanciful dreamer. She has visions of writing a great novel and spends her days with ink-stained fingers in the attic of her family’s home.

The eldest, Meg (Trini Alvarado) plans to someday marry and like her mother, create a good home. The youngest, Amy (Kirsten Dunst) is the baby of the family who everyone spoils. She also dreams of being an artist.

And then there’s Beth (Claire Danes), the shy, quiet sister who doesn’t allow herself the same dreams.

RELATED | One Day in December: Fall in Love at First Sight

As the years pass, the girls grow up, sometimes together along with their neighbor Teddy “Laurie” Lawrence (Christian Bale), and other times miles apart. Their circumstances and lives change, but through it all, Jo remains determined to write her novel, the inspiration of which may be closer than she realizes.

Growing up, Little Women was one of those movies I re-watched time and again. Back then I didn’t appreciate it in the same way I do know.

And while I never did read the beloved classic novel on which this was adapted, the film is special – even if appreciated as a standalone story. There’s not only a nostalgic quality if you, like me, grew up watching this one, but it’s also the kind of story that makes you feel good.

As bittersweet as the story is (much like life), it’s still an uplifting story about turning something tragic into something inspirational.

Also, no matter how many times we see a favorite film, I’ve discovered you can often still see or learn something new with each re-watch. Such is the case with this film.

What I didn’t ever pick up on or realize is the implication that the March family once enjoyed a more comfortable if not prosperous lifestyle. In this version, there are many references to this, which makes the story more complex and offers insight into the characters’ motivations. Amy’s continuous mispronunciation is also something I really noticed this time through, and they make for a cute quirk.

Perhaps what’s best about this film under the gorgeous direction of Gillian Armstrong and with the costume design of Colleen Atwood (Oscar winner), is its cast. Everyone is really quite good including Samantha Mathis as an older Amy and Gabriel Byrne as Baehr.

Mary Wickes also stars as Aunt March, who some of you may remember from White Christmas. Everyone is fantastic, and what I think this version does better (than any I can remember) is build on the controversial Laurie/Amy romance. It’s delicate, but I feel like, given the runtime, it’s quite sweet and genuine.

No matter how many versions of this I see, I continue to be enchanted by the story and characters. Whether it’s their fierce loyalty to one another or their unique personalities, everyone is memorable. It’s the kind of story I’ll enjoy seeing every new adaptation of, which also includes the 2019 version!

Though it’s perfect any season, during this season, Little Women is the perfect film to watch.

Content Note: Little Women is PG, and apart from a few thematic elements, contains nothing to note.

Where to Watch: Stream on Prime Video or rent/buy on Digital and DVD.

Have you seen this version? Do you like or dislike it? What’s your favorite adaptation of this story? Where do you fall in the Laurie/Baehr/Jo love triangle? Comment down below with all of your thoughts.

4 thoughts on “Little Women (1994) Review: A Story to Treasure Every Year”