How did I not know of this film before?! Such was my first thought upon discovering Ella Enchanted last year. I now love this film. It makes me smile every single time I watch it, and I have indeed watched it multiple times in the year that has passed. It is just such fun, such good, good fun.

The film is loosely based on the book of the same name by Gail Carson Levine. Although I have read that there is not much of the book in the movie. Knowing nothing of the book, this does not distress or concern me, but for Ella book lovers, just a heads up that is not a faithful adaptation.

Once Upon a Time: Ella of Frell in the Kingdom of Emir 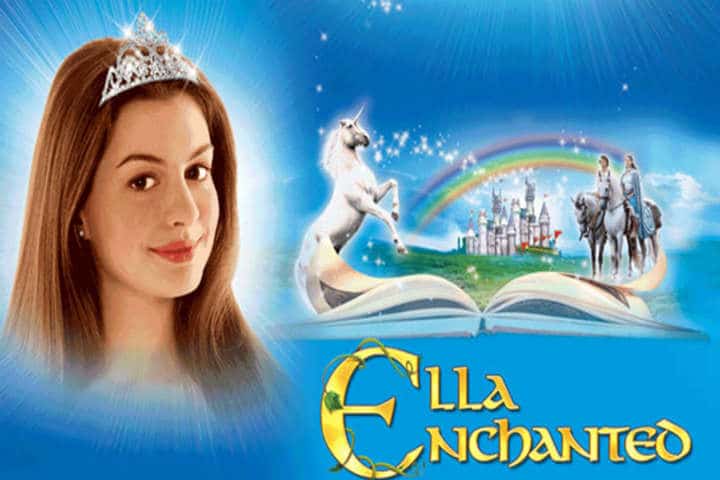 As a major Monty Python fan, I was totally enthused when – right at the beginning – I recognized the narrator’s voice as belonging to Eric Idle. I knew right then and there that I was in for a treat. With Eric Idle’s rhyming narration, we meet Ella of Frell.

RELATED: Behind the Fairy Tale: Cinderella Versus Ella Enchanted

The always appealing Anne Hathaway plays our feisty, idealist heroine, who suffers from a rather unfortunate “gift.” An incompetent and haughty fairy, Lucinda (Vivica A. Fox), bequeathed to Ella – when Ella was just a wee babe – the gift of obedience. Yes, Ella always does what she is told, following every command given to her.

“Hold your tongue!” – She holds her tongue, literally.

“Give me your necklace!” – She hands over her necklace.

Her mother and the somewhat perennially befuddled house fairy, Mandy (Minnie Driver), keep this “gift” a secret and seek to protect Ella and temper the gift’s effects. But then her beloved mother dies, and her hapless father (Peter Bergin) marries a nasty, vainglorious woman, Dame Olga, played so deliciously repulsively by Joanna Lumley. Dame Olga brings to the marriage – besides her nastiness – her two snarky, prince-obsessed offspring, the Queen B, Hattie (Lucy Punch), and the ditzy Olive (Jennifer Higham). They quickly discover Ella’s secret and use it to their full advantage, making Ella’s life miserable. She must be released from this gift, and she must find the elusive Lucinda to do it.

Armed only with a magical book to guide her on her journey – the book is Mandy’s bewitched boyfriend Benny (Jimi Mistry), whom she transformed into a book by accident years ago – Ella sets off to nullify her “gift.” And as with all heroes’ journeys, she meets dangers, runs into trolls, picks up some helpers and companions along the way, including a non-singing elf, Slannen (Aidan McArdle), and even a dashing prince, Prince Charmont (Hugh Dancy).

In her quest to find Lucinda, Ella finds herself increasingly embroiled in the politics of her kingdom, the social injustices, and begins to open the eyes of the coddled, soon-to-be-king Prince Charmont to the harsh realities of his uncle Edgar’s (Cary Elwes) rule. Ella also finds herself increasingly aware of this handsome prince at her side, of his innate goodness, earnestness, sincerity, and integrity despite his apparent life of privilege. And Prince Charmont is likewise increasingly smitten with this woman, who challenges him, pushing him always to do what it is right and just.

But Lucinda is a hard one to find, and “gifts” aren’t easily returned and rescinded. And Edgar has his own nefarious plans to maintain the status quo and keep the kingdom as his own. Plus, Hattie and Olive have their own designs on Prince Char and will do anything – even making deals with the devil – to attain that royal goal. And Ella, Ella might just have to find it within herself to be disobedient for once in her life.

Ella Enchanted is a self-aware fairy tale of the post-modern age that balances – rather successfully – the metanarrative impulse to undermine and ridicule the genre, spoof it, while at the same time embracing the emotional integrity and satisfaction of a good, fairy tale love story.

In short, it is fun, just good, good fun.

It is lighthearted, fast-paced, funny. There are sudden song and dance scenes, which are truly delightful. There is great bantering chemistry between Hugh Dancy as Prince Char and Anne Hathaway as Ella. Prince Char is like the Gilbert Blythe of princes – very supportive, appealing, gently teasing, kind, good, just good to the bone. Ella is an engaging, relatable heroine.

Yeah, it’s not too satirical, not too serious; it’s just right.

Where to Watch: Amazon Prime, DVD.

Our romance-themed entertainment site is on a mission to help you find the best period dramas, romance movies, TV shows, and books. Other topics include Jane Austen, Classic Hollywood, TV Couples, Fairy Tales, Romantic Living, Romanticism, and more. We’re damsels not in distress fighting for the all-new optimistic Romantic Revolution. Join us and subscribe. For more information, see our About, Old-Fashioned Romance 101, Modern Romanticism 101, and Romantic Living 101.
Pin this article to read later! And make sure to follow us on Pinterest.
By Jessica Jørgensen on September 18th, 2017

4 thoughts on “Ella Enchanted (2004): Not Too Satirical, Not Too Serious, Just Right”