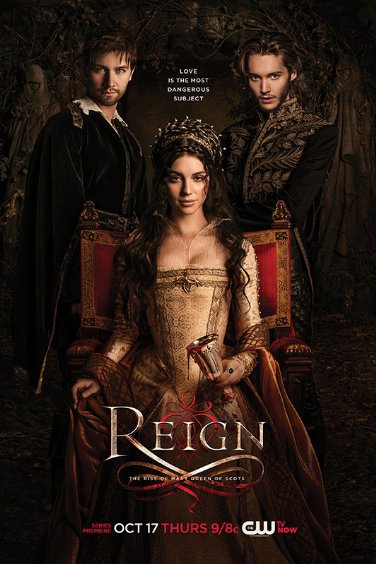 I consider myself a bit of a ladies fashion buff. I’ve been obsessed with how women choose to adorn themselves since I was a small child. As I grew older, I found myself interested in not only modern fashion, but in women’s fashion throughout the ages. So, when I first watched Reign and noticed the playful mixing of styles from the different historical periods as well as our own, you can imagine how it might have piqued my interest. Reign’s costume design runs the gamut from pieces being almost exact replicas of historical Renaissance garb all the way to looking like something you might see on the runway this upcoming season. So, in the interest of style and history fanatics everywhere, I thought I would do a little investigation into Reign’s costume designer and her inspiration behind those lush looks we’ve been seeing.

Reign is based loosely on the story of Mary Queen of Scots in the 16th century. However, if you were expecting a strict adherence to the historical details, wardrobe, customs, or mannerisms…think again. This series may be based on actual history, but it’s interpreted through a pretty heavy Gossip Girl-esque lens. The CW is providing its usual dose of teen angst, catty backstabbing, and down and dirty girl gossiping that one finds only in the halls of a high school. In keeping with this theme, the producers of the show specifically requested that contemporary style be woven into the historical costumes, something their primarily younger female audience could relate to (1).

Costume designer Meredith Markworth-Pollack had quite a challenge on her hands creating the wardrobe for this historical drama with a contemporary attitude. Ms. Markworth-Pollack appears to have an understanding of the historical clothing of the period. For older characters and crowd scenes she stays mostly faithful to the silhouette of the period. Ms. Markworth-Pollack claims to have gotten most of her initial inspiration from historical documentation on 16th century dress, as well as period movies. “La Reine Margot is my favorite, it’s a French film that follows Queen Margot, Catherine de Medici’s daughter. It’s dark and sexy and the costumes are stunning (2).”

Where she begins to stray from the more traditional costumes is with Mary and her four ladies in waiting. This is where traditionalists may cringe at the many liberties taken. Markworth-Pollack takes care to make sure each look gives a nod to the proper period costume through details like embroidery or achieving a similar shape with corsets (apparently the corsets have become popular among the young actresses due to their positive effect on their posture) (2). However, that is where the similarities end. The number of period styles one might recognize in the girls’ costumes in a single episode can span the entire history of western clothing. The waistlines in particular have a tendency to vary widely. You might see a drop waist one scene and an Empire in the next, not to mention numerous others at any given moment. The series follows few rules, choosing to be rebels and create their own distinct look.

In keeping with the more relaxed contemporary style of the audience, Markworth-Pollack aimed to follow suit with the lead characters’ style, making them more accessible to the CW’s female audience. “I wanted the characters to have a more relaxed and casual vibe in their clothes than they actually did in the times. We achieved this by getting rid of ruffs for women, loosening their silhouettes, and only using corsets when needed. I kept similar fabrics and textures to allude to the palette of the time. Brocades, beaded silks, laces and metallics have been hugely successful for this (3).” In order to create the individual looks for Mary and her ladies in waiting Markworth-Pollack states, “I started with mood boards for each character, with both historical and contemporary images. I wanted the show to look like a painting, with each character complimenting the next (3).”

Starting with Mary, Markworth-Pollack says, “From the beginning I had this vision of her as two women: she’s the warrior queen and she’s the romantic. And I always feel like usually we embody both of those elements in her wardrobe, so if there’s a harsh or strong detail, it will be accompanied by something light and feminine.” With the character of Kenna, Markworth-Pollack went for a more bohemian vibe, decking her out in more relaxed flower child inspired dresses and sticking with mostly earth tones. When designing Lola’s look, Markworth-Pollack was taken with her romantic characterization, struck by the “iconic image of Ophelia in the water, surrounded by flowers.” Out of this picture sprung Lola’s 1920’s vibe and its soft silhouettes. Aiming to keep her both feminine and strong, she dresses Lola primarily in plums, burgundies, pinks, and lavenders. With Greer Markworth-Pollack latched onto her position as a woman with an abundance of wealth but no title to go along with it. Greer is constantly trying to prove her worth through her money, always going slightly over the top in her use of jewels and her fashion. Following this theme, Markworth-Pollack keeps her in mostly jewel tones, focusing on emerald greens and deep golds. Lastly, Markworth-Pollack designated the now unfortunately deceased Aylee as the more conservative preppy girl in the group. Old vintage 1950s and ’60s wedding dresses became her staple outfit, and cream dominated her wardrobe. (4)

All in all, the process of creating the unique wardrobe for these ladies appears to have been quite the adventure. I for one find this new contemporary historical style to be refreshing and a pleasure to watch. It is an innovative approach to the typical historical drama that meshes well with its young trendy audience. In a last comment, Markworth-Pollack stated, “I’m hoping it’s an inspiration for our female viewers to creatively add to their wardrobe. It’s such a do-it-yourself kind of look. We’re constantly taking vintage pieces and dying them, altering them, beading them – all to make them our own (2).” So, there you have it. Take a page out of Reign’s book and play around with your own wardrobe. You may just create the next reigning fashion.

Our romance-themed entertainment site is on a mission to help you find the best period dramas, romance movies, TV shows, and books. Other topics include Jane Austen, Classic Hollywood, TV Couples, Fairy Tales, Romantic Living, Romanticism, and more. We’re damsels not in distress fighting for the all-new optimistic Romantic Revolution. Join us and subscribe. For more information, see our About, Old-Fashioned Romance 101, Modern Romanticism 101, and Romantic Living 101.
Pin this article to read later! And make sure to follow us on Pinterest.
By Rebecca Lane on October 3rd, 2014