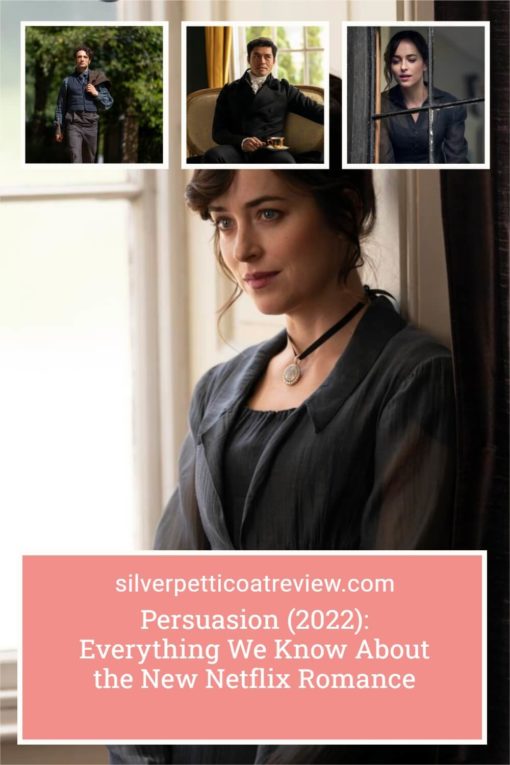 “I almost got married once,” Anne Elliot recalls. “There were no two souls more in rhythm than Wentworth and I. And I was persuaded by my family to give him up,” Dakota Johnson (as Anne) says, speaking directly to the camera wistfully. So begins the new official trailer Netflix shared on Tuesday for the new 2022 adaptation of Persuasion (based on the novel by Jane Austen.)

With the massive success of the Jane Austen-inspired romance series, Bridgerton, it’s no surprise Netflix decided to go directly to the source by adapting a Jane Austen classic.

Persuasion follows the Jane Austen heroine, Anne Elliot, when she meets her former love, Captain Wentworth (a naval captain), eight years after being persuaded not to marry him. Will they have a second chance together? Or will they each find love with someone new?

Before the new official trailer ends, Anne Elliot declares (again gazing into the camera): “Don’t let anyone tell you how to live or who to love.”

If the movie’s as beautiful as the trailer, then we may have another new favorite Austen adaptation – joining the likes of the 1995 Sense and Sensibility adaptation with Emma Thompson and Kate Winslet, the ’95 Pride and Prejudice with Colin Firth and Jennifer Ehle, or even the 2005 version with Keira Knightley and Matthew MacFadyen.

We’ll find out when Netflix’s Persuasion premieres later this summer.

Till then, here’s everything we know about the 2022 Persuasion movie starring Dakota Johnson.

EVERYTHING WE KNOW ABOUT PERSUASION (2022)

Besides the crew, the cast has an all-star lineup. Dakota Johnson stars as the lead role and heroine, 27-year-old Anne Elliot. Johnson’s most known for her roles in the 50 Shades franchise and The Lost Daughter.

As the swoony Romantic Hero, Captain Frederick Wentworth is Cosmo Jarvis from Lady Macbeth, Peaky Blinders, and My Mother and Other Strangers. So, he’s no stranger to period pieces.

Another primary cast member is the handsome Henry Golding from the massively popular rom-com Crazy Rich Asians! He’s playing the Austen bad boy, Mr. Elliot, who may or may not be up to no good. Can they have cast anyone better?

“Living with her snobby family on the brink of bankruptcy, Anne Elliot is an unconforming woman with modern sensibilities. When Frederick Wentworth — the dashing one she once sent away — crashes back into her life, Anne must choose between putting the past behind her or listening to her heart when it comes to second chances. Adapted from the Jane Austen novel.”

The Netflix film looks absolutely delightful. The gorgeous visuals and sumptuous costumes remind me of the brilliant 2005 Pride and Prejudice adaptation, while the witty approach recalls the enormously underrated 1999 take on Mansfield Park.

I love the diverse cast in the preview, the ironic, clever tone, the stunning cinematography, etc. My only question mark on the trailer is the characterization of heroine Anne Elliot.

I hope they don’t alter the character much from the book. The trailer makes Anne seem much wittier like Elizabeth Bennet rather than the introverted Anne from the novel.

But time will only tell.

Still, the trailer looks promising, and I can’t wait to watch and see how they bring Jane Austen’s timeless love story to life.

Principal photography for the production started last May in 2021, even filming near one of Jane Austen’s homes in Bath. Austen lived there (albeit during a difficult time in her life) between 1801 and 1806.

In the first look at Persuasion on Vogue, we also learned a lot about the new adaptation!

Carrie Cracknell decided to approach the adaptation in a playful, witty way with a lot of humor. She also believes that “period films often teach you as much about the moment they were made in as they do the moment that they’re replicating.” So, expect a modern touch in the movie.

It was this modernization of the story that drew Johnson to the part. She says that she “was drawn to the occasionally modernized language and themes, breaking the fourth wall and speaking directly to the audience, and the fact that a strong-willed woman remains as much a topic of discussion these days as it was then.”

Ultimately, expect this to be one of the funniest Austen adaptations – while it does have a modern approach, they’re also trying to create something authentically Austen.

“Of all Jane Austen’s great and delightful novels, Persuasion is widely regarded as the most moving. It is the story of a second chance. Anne Elliot, daughter of the snobbish Sir Walter Elliot, is woman of quiet charm and deep feelings. When she was nineteen she fell in love with—and was engaged to—a naval officer, the fearless and headstrong Captain Wentworth. But the young man had no fortune, and Anne allowed herself to be persuaded to give him up.

Now, eight years later, Wentworth has returned to the neighborhood, a rich man and still unwed. Anne’s never-diminished love is muffled by her pride, and he seems cold and unforgiving. What happens as the two are thrown together in the social world of Bath—and as an eager new suitor appears for Anne—is touchingly and wittily told in a masterpiece that is also one of the most entrancing novels in the English language.”

If you’ve yet to read Jane Austen’s final novel or want to reread it before the movie’s release, now is a perfect time.

Now, if you want to watch previous adaptations of the book, here is a list of a few of the most popular ones.

It will be fun discovering which of these adaptations comes out on top!

So, how excited are you for the new 2022 adaptation of Persuasion? Do you think it looks like a good version of Jane Austen’s beloved story? Let us know in the comments!

2 thoughts on “Persuasion (2022): Everything We Know About the New Netflix Romance”